Firstly: big apology for this posting to anyone who doesn't watch Lusht...
Well, i've watched it three times and I'm still scratching my head. The double-length finale was a tasty mix of revelation and more obfustication that left you quite breathless. Well, we'd all be disappointed with our favourite sci fi soap if it didn't make us do that, now wouldn't we? I even made NOTES for god's sake. I wrote a list of the characters and their interconnections, but decided that was essentially a waste of time. I read all the message boards and forums. Two things become clear:
1) There are a lot of totally crazy theories being generated by this thing and...
2) I devote FAR too much thinking time to trying to figure out how it's all fitted together. I went on a meditation weekend and found that instead of my babbling ego all I was confronting were the endless permutations of how the plot might develop. Sigh...so this posting isn't any kind of deep thinking, more a purgative to cleanse me until Season 3 wrecks my life again.

Firstly let's hear it for Desmond. Whatta guy. What an actor actually. His despair at his plight after killing Kelvin (Solaris connections here?) was truly moving. No, really. The bit with the whiskey bottle, the letter and the beautiful linking of his and Locke's despair was truly masterful. And despite the stereotyping (he's Scottish, so he DRINKS) he presented probably the first truly sympathetic character. By the end I was praying that the failsafe wouldn't wipe him out of the plot for good (though I have a feeling his sacrificial redemption kinda cancels that out). Compare his emoting with Jack's binary style. Jack's either Dr intense and moody or he's just doing that 'I'm really upset and betrayed' look (see pic).

Mind you, he was well in order with that one as he finally 'outed' the useless Michael. (please STAY on the boat and DON'T come back. Though, isn't Walt gonna start whinging when he realises his dog's been left on the island? ~And what about that nasty rash? Is that supposed to imply the infection?).
Yes, Des had it all. Well all the clues anyway. On the 'Our Mutual Friend' front, I'm fighting shy of reading too much into the inclusion of the book (especially as the Owl Creek thing was a bit of a red herring methinks), but it occurs to me that Des' fave author is notable in this context for his use of ridiculous COINCIDENCES. Yup, just like Lusht, old Charles loved to link his characters in somewhat unbelievable ways. 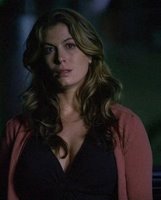 McDes also managed a double whammy of having both a rather attractive girlfriend, Penny Widmore (was that Jim from Neighbours as her dad?) AND bringing back the lovely Libby (albeit in a ridiculous wig. What is it with the make-up dept on this programme? Can't they make hair believable? That's Jack, Locke and Libby all made to look laughable). Mind you, handing over a cool 42,000 dollar boat marks her as SUSPICIOUS when coupled with her appearance in Hurley's asylum. Other great clues of note:
a) Kelvin - the awesome Clancy Brown, formerly the 'spook' who taught Sayid to cut off digits - refers to the Others as 'hostiles' (and thus, so does Des). This implies that the Others - referred to by Henry Gale as "the good guys' - are opposed to the Dharma Initiative in some way. Meaning that the plane crash survivors are part of the experiment.
b) Why did Radzinsky - Des' predecesssor who left his brains all over the Swan station ceiling - make edits to the orientation film?
c) come to that, why the hell did he feel the need to draw an INVISIBLE map on the blast door? And why was Kelvin continuing it? Did they KNOW they were being observed?
d) Des' reference to there being nothing out there and being in a snow globe seem to imply a big an self-contained space. Snow man jokes? Also Des headed West, whereas Michael was told to head to 325 on a compasss, that's NNW. 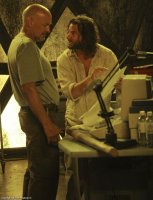 Also Des had one of the the best lines in the series. "I think I crashed your plane'. So yes, the button DID do something and it was to stop the Swan station turning into the set of Carrie. Quite honestly, this section was making very little sense 10 minutes after the show ended despite as an excuse to pile on the special effects (shame on you for using the running away from a blossoming explosion cliche). Ok, the bit where all the metal gear was flying about was great and I LOVED the bit where the timer imploded. You broke the clock guys! Talk about comic timing, especially twinned with Locke's 'oops, I kinda fucked up there, didn't I?' look. It would only have been funnier if the little heiroglyphics had popped out on springs while going 'boing'.

And what WAS the failsafe? Obviously big and magnetic (cf: the also amusing quarantine door nearly taking out dullsville Bernard), but was it kept secret because its use would give away the location of the island to the outside world (which we now know exists)? Kelvin Inman's drunken explanation (which he subsequently denied) wasn't really that helpful was it? Though it did point back to Rose's faith healer's statement about parts of the earth's crust having magnetic anomalies.

So is that it for the station? With Jack, Sawyer and Kate all going to the Others' 'home' it's looking increasingly likely that either new characters in the remaining survivors are brought in, Sayid and Jin take the reins or that Hurley and Charlie are gonna start acting grown up. What was it with Charlie? Is he being nasty and disingenuous about Locke and Eko not returning? Why won't he talk about the incident? And do he and Claire deserve each other? His hobbityness continues to annoy intensely. Actually, thinking about this a bit more it would seem that Sayid, Jin and Sun, with Des' boat are well-placed to rescue Dr Jack et al (probbaly just before they find out anything about the others)...
More really good stuff was the revelation that Henry was maybe 'HIM". His line about Mr Friendly's beard was the second best in the series. I'm starting to really like him. His greeting and little bow to the gagged Jack was hilarious, and he's really good at delivering lines with just the right amount of sarcasm. You couldn't help but imagine that his 'bon voyage Michael' line was not entirely heartfelt. So WAS he on his way to get Locke? He obviously lied about not pressing the button. I was concerned about his reference to the fact that Walt was more than THEY could handle - does this mean the writers are just gonna ignore all the weird psychic stuff?...

Gawd, I'm going on a bit here aren't i?
So what else was good? The statue? I couldn't work out what was more disquieting: the fact that the rest of the statue was missing, the fact that it had four toes, or that Sayid chose to use the word 'disquieting' to describe it. I can't help thinking that the producers threw it in to make all those theorists ramble on about Atlantis, the Colosssus at Rhodes and time travel (again). Most American blogs seem to regard it as a rather inane Simpsons reference...

Doh!
The production values continued to soar in most areas except in the case of the Hurley bird (the one that catches the worm?) which was, frankly, useless. C'mon guys, get a better CGI crew in quick. It was a weird green blurry thing. Which reminds me. Whither the MONSTER? Forgotten that one hadn't you? Maybe the budget ran out for more wiggly black smoke. But the island continued to whisper its sweet 'aloha's to the viewer. The rock formations near the cove where Des' boat was anchored were sweet (although they'd been used before when the tail section group were travelling across the island) and as the Walt rescue party came over that hill I just sighed at the verdant loveliness of it all. Why does no one ever say, 'Wow, this is beautiful man. Just like err...Hawaii'?

The final mindfuck was neat (if only because it promised the return of the lovely Penny next season) but here's the biggest weirdness - WAS that Matthew Fox playing a dorky portuguese chess-playing scientist in the employ of Ms Widmore? If so, the producers are denying it, but come on...they, like the Others, are prone to lying through their teeth. I wondered if it could be another of their little jokes. The whole twin thing is perplexing, but look at the screen grab. If that's NOT him, I'll eat my Dharma issue hat.

So, to sum up, it's all nonsense, but it's made me write all this just to try and put it into perspective. I grow more and more disturbed by the contemporary isssues signposted in the plot details. The plane crashed on Sept 22nd (a little too close to 9/11 for comfort), Sayid's Gulf war experiences, references to global catastrophe - it all adds up to post-millenial discomfort. Yup, it's disquieting...

Critics are already muttering 'shark jumping' and predicting the end of Lost. Some people hate to be messed with TOO much, and the producers' clues about more 'romance' in series 3 DO look worrying, but it still beats Big Brother. But the writers neeed to iron out their obvious 'making it up as we go along'ness if they don't want to risk losing the more sane viewers (hey, the nerds will always dig it). Actually, I DO know what's gonna happen. It's all Vincent's doing. Anyone notice that while the sky was turning violet there was no sign of the demon pooch (who always seems to turn up at BAD times)? That's coz it's all in his doggy mind. Really.
But one last thing...if JJ Abrams ever reads this - can we have the Polar bears back please?

Addendum: The marvellous TVWP have posted their hilarious recap of the finale. I was particularly moved by this concise summing up of the series in the thank-yous at the end: 'thanks to ABC for turning the exercise of broadcasting a simple television show into as much of a cynical mindgame as anything Dharma could come up with -- what with the screwy schedule, four clip shows this season, few-minutes-past-the-hour running times, crass projects like books and websites that you like to call "interactive" but are really just excuses to try to grab more advertising revenue'
See you in the next life, brother...
Posted by Chris Jones at Tuesday, May 30, 2006

I too think the Desmond character is fantastic. Particularly enjoyed the 'I think I crashed your plane' moment - as things briefly began to make sense :)

The thing I liked about the Penny Widmore getting called by the research station moment, was that I think this is the first 'off-island moment in real time' in the programme? Is that right? I can't think of another i.e. everything else has been flashback. This is the first event in the show which purports to be going at the same time as people are on the island - but elsewhere in the world. That blows a few of those (apocalyptic) theories out the water if so, right?

And yes, that was Jim off Neighbours. He's also in The OC you know.

Ah yes, but how do you KNOW it's in real-time? hoho...
Actually I heard the producers had promised more 'real time' action in the next series, so yep, looks like you're right.
Still worried about the promises of 'romance' though. Didya notice the meaningful look between Jack and Kate at the end? Yuk...
Reckon there's definitely a connection between the snow and the polar bears too. And is that the same listening post where Leonard first heard the numbers?
Aaaargh...