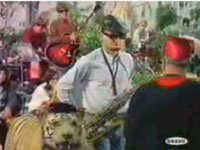 Yes, I KNOW everyone in the world is digging YouTube right now. But boy, the treasures seem to be never-ending, like that story that Limahl used to bang on about. Of COURSE everyone's seen the fabulous Gonks Go Beat clip, featuring the Graham Bond Organization mixing it up with some happening longhairs (and Kenneth Connor) on a beach...with a stuffed tiger. Awesome stuff, if only for Dick Heckstall Smith, Jack Bruce and Ginger Baker being reprimanded for not being 'happening' enough and a 'blink and you'll miss it' appearance of a pre-fusion John 'ey up' McLaughlin. 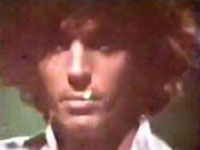 But 5 minutes of browsing discovered some more dark secrets which have turned my world upside down. For instance, check this promo of Syd's Floyd performing "Jugband Blues", with Roger and Rick on tuba and trombone! I mean, christ...I NEVER knew that Syd was even remotely together enough to do this, and legend always seemed to imply that by the time they cut the song that Gilmour had been drafted in and Syd was well on the way out. So WHEN was this recorded? Mind you, check Syd's vacant stare. Nick Mason's expression says it all really. 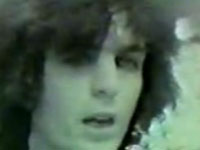 It's Mason again who sums up the band's feelings on this other prime slice of Barrett careering off the rails as they plough manfully through a British TV performance of "Apples And Oranges". Note how Waters looks embarassed (and daggers at Syd) and Wright grins inanely, as though he's desperate to show that he's having fun. As ever Mason looks wryly amused, while the producer desperately tries to avoid pointing any cameras at a lead singer who is so obviously SOMEWHERE ELSE in the cosmos. Cracking... 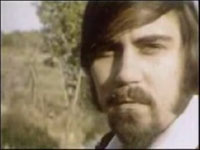 But wait, there's much more than this standard psych history on the site. My overwhelming love of all things prog and Greek led me to unearth these beauties. Check a pre-666 Aphrodite's Child as they mime appallingly through "Rain And Tears" in a garden full of Greek statues (see what they did there?). Dig Vangelis' groovy Carnaby St threads and moody stare. Marvel at Demis Roussos looking only slightly less enormous than he did in later years. And smile at the drummer, obviously wishing he was somewhere else with a bottle of Ouzo. Let's face it, they look like a bunch of lysergic goat-herders (and all the better for it, too). 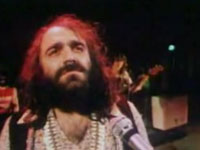 Talking of the mighty warbling man mountain from the Aegean, this is also worth a quick look. I love the way he seems to be cueing the bass player at the beginning of the clip (despite miming badly) and how, for him, hair care was obviously NEVER an issue. What a voice though...
Posted by Chris Jones at Thursday, May 25, 2006