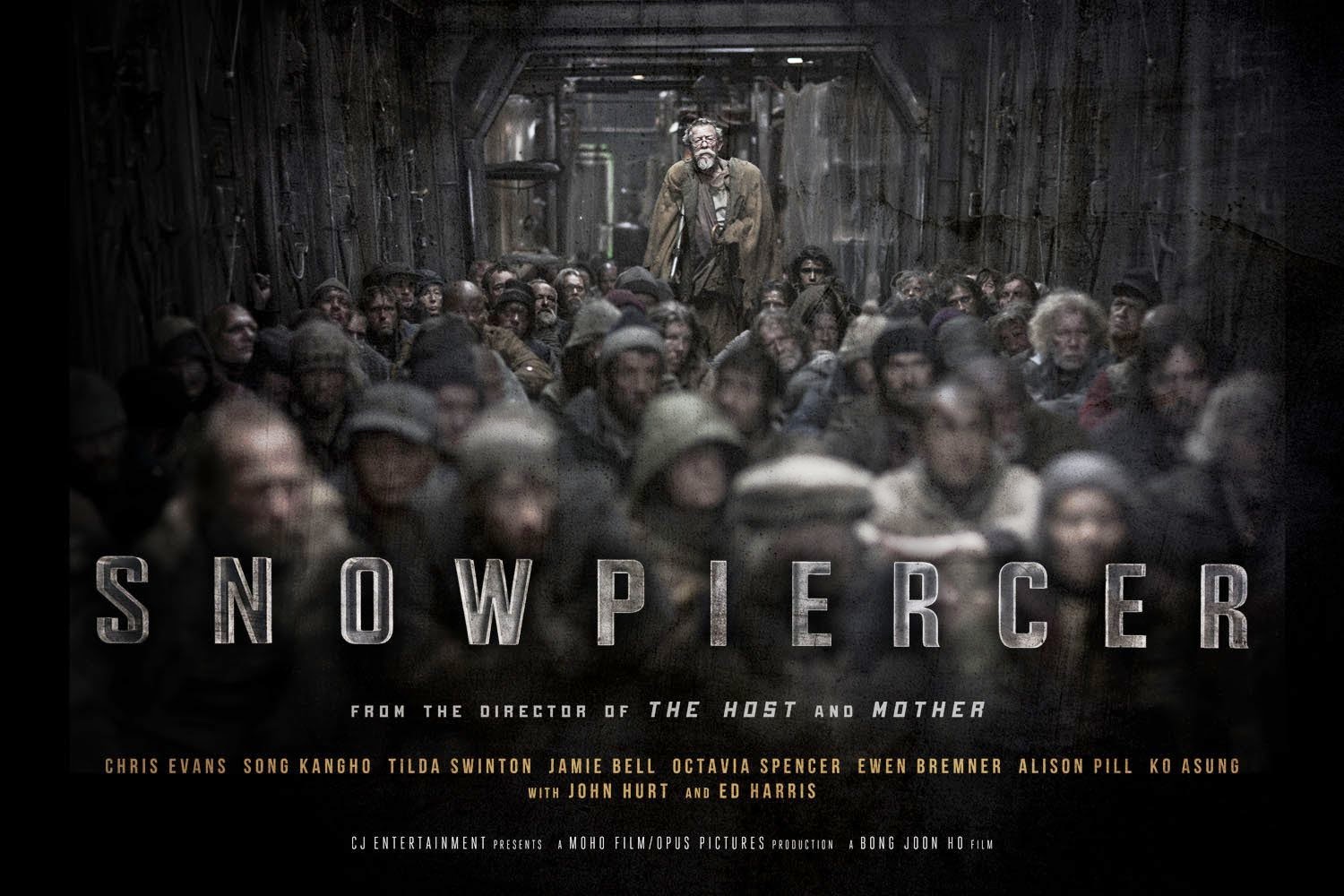 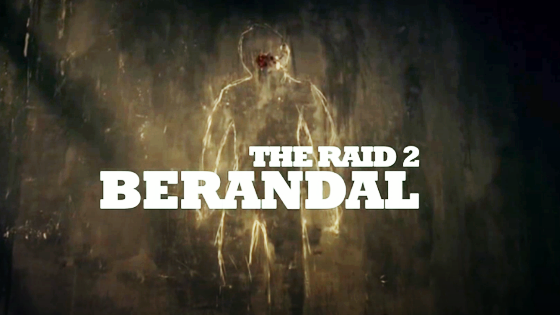 It's not all Danish auteurs, knotty jazz-rock and impenetrable nonsense here at Jonesisdying towers. We like a little bit of straightforward rock 'em, sock 'em mainstream Hollywood action movie erm... action once in a while (ok, quite often, truth be told). And science fiction as well.

The trouble with this is, of course, that most Hollywood actioners are a lot like crack or Chinese food. Five minutes after consuming it you just forget the two and half hours of eye candy and crave some more. What's worse, I suspect this trend is deliberate as the habit can often lead to watching a movie about five times before you can begin to distinguish it from all the others in the genre/series/franchise etc. etc. Yes, the subject matter or treatment is usually predictably generic (it's a species of film grammar, after all), yet frequently these days it's also the sheer length that can lead to big screen alzheimers.

For example: I know I saw Captain America The Winter Soldier a couple of weeks ago (and really enjoyed it) but beyond a vague sense that the film seemed to be addressing some genuinely interesting points about freedom of information vs national security and it had more Scarlett Johansson than the last one*, I couldn't really tell you what happened: the Marvel franchise has now grown so huge and labyrinthine (actually in quite a good, coherent sense to be honest) that it seemed to be more exposition and soul-searching interspersed with superb set-pieces than anything; like an expensive soap opera with guns rather than a punchy thrill-fest, which is what we really want.
The reason I say all of this is because I recently saw another couple of movies that reminded me that simplicity is always the wisest course when building your thrill-ride for the eyes. Both films represent what I now think of as the sub-genre of 'post-gaming' cinema. That is: the movie has one very basic point - to get the main protagonist from A to B via a series of levels, each of which contain a different (escalating) level of 'peril' (I love the use of this word in film adverts - if any poster warns me of 'mild peril' I immediately think silent movie villains, twirling moustaches and tying heroines to railway tracks). The final level, naturally, contains the big 'Boss'.

Simples. And you'd imagine that such a brutally minimalist slant to plotting would lead to mindless films for morons who spend most of their day in their underwear and using their thumbs to shoot, stab, fold and mutilate stuff on the TV. Yet you'd be wrong. When it comes to (often literally) visceral thrills coupled with devilish ingenuity there were two films that defined this sub-genre in the last two years: The Raid: Redemption and Dredd.

For some reason I never got around to writing about these films in depth, but while both superficially seem to have about the same plot (fighting your way up a squalid dystopian high-rise block to defeat the criminal overlord/lady) they both erm... blew me away. Dredd single-handedly rescued a maligned comic-book adaptation (from Danny Cannon's awful attempt with Sylvester Stallone who ruined it all by taking the helmet off) by understanding that the central character was always a brutally minimalist character with barely any emotional touch points and with an elegantly binary notion of 'morality' or 'justice'. Karl Urban channelled the unsmiling near-fascism of the Judge to perfection. Like Verhoeven's Starship Troopers, this left us with a gory, blood-spattered irony-fest where the real imagination can be poured into both a wonderfully grimy, drug-fuelled aesthetic and increasingly kinetic set-pieces. I really hope they make another.

Gareth Evan's The Raid had a similar (digital post-HDR) grimy aesthetic, but along with the gore came some astounding martial arts scenes (utilising pencak silat - a special form of close combat) added to the typical plot-twists and oddly gooey sentimentality that no far Eastern film can do without. This isn't to say that it was complex in any meaningful sense, but added a little spice to the Cuprinol-like directness of what was the film's aim.

This week saw its sequel: The Raid 2 (well, durr...), released in major cinemas and, sure enough, it seems that the first film wasn't a fluke. Starting off almost exactly where  the finale of the first instalment left off, it follows doe-eyed one man killing machine, Rama, as he's dragged back into grimy underworld corruption-riddled Jakarta again. Now he's working undercover to bring down some warring crime lords as well as the high-ranking police officials who collude with them, and it's no small matter. It involves punching walls while serving a two-year prison sentence (separated from his wife and new child, just so he can get near to one of the crime lord's sons), fighting whole crowds in toilet cubicles or mudbaths and then navigating a maze of double dealing and deception as well as negotiating (i.e: slaughtering) his way to a rendezvous with the hardcore violence awaiting him at the top of yet another building. This time it's a restaurant - giving a great opportunity for an incredible fight sequence in an all-white kitchen (see above image) that leaves it considerably redder in hue. 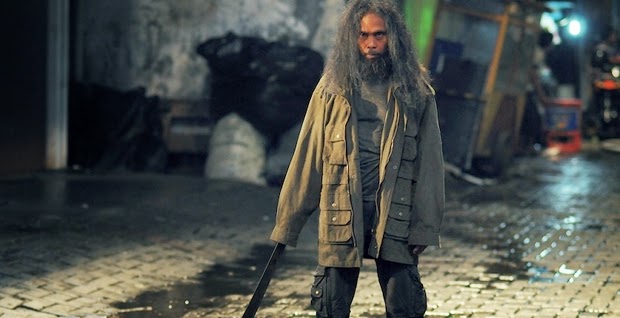 The violence is often so brutal that you enter that strange mind-state where you alternate between gasping and giggling (a scene with a metal baseball bat embedded in an opponent's face made the entire cinema guffaw). Evans knows exactly how to balance the kineticism with nerve-shredding pauses that presage all the carnage. And in the end, despite all the head-swimming double-crosses, it's a simple film with a simple aim that really gets the job done. It's only real flaw is perhaps the needlessly distended length, but in this case more doesn't necessarily equate to less. It allows diverse variations on the theme, such as a wonderful fight sequence in a car, during a bullet-riddled high speed chase or scene involving a female, deaf assassin, two hammers and a metro carriage. Ouch...

And now there is another film to extend this linear, level-defeating approach. Snowpiercer is, I have to say, one of the best things I've seen in a long time. Not yet released in the UK or US (I believe it has a summer US release date now) - it's directed by Joon-ho Bong the man behind the superb South Korean monster movie Gwoemul (The Host).

The film is based on a series of graphic novels by Frenchmen Jacques Lob  and Jean-Marc Rochette and uses the simple premise of a post-apocalyptic world where the last of humanity live in a huge train which endlessly circles a terminally frozen globe. In a hilariously pared-down metaphor for society, the poor are lumped into the rear trucks where they live in cramped, bullied squalor and munch on cubes of disgusting looking protein jelly (and yes, you do find out what it's made of). The rich passengers who paid to join this dystopian Orient Express live in luxury at the front of the train, as does the mysterious Wilford whose emissary is played by a fantastically unrecognisable Tilda Swinton.

(In a side note: this is the third film I've seen in the last month that features Swinton playing characters which don't look like Swinton! her turns in both Wes Anderson's Grand Budapest Hotel - as the aged Madame D - and in Terry Gilliam's excellent Zero Theorem (as a Scottish, schoolmarmish virtual shrink) are amazing.) 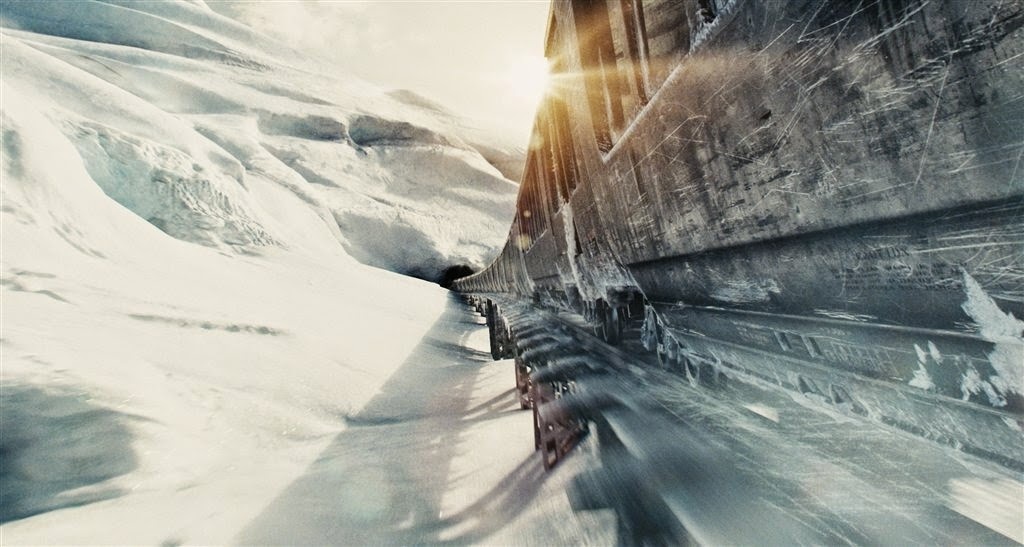 At the heart of the increasingly unhappy proles travelling third-class is a bearded Chris Evans (Captain America himself, here playing Hugh Jackman-like Curtis) along with a young protege, Edgar (Jamie Bell who, thanks to this and Nymph()maniac now seems to have shaken of the awful stench of Billy Elliott) and an ageing leader, Gilliam (see what they did there? This character is played by John Hurt - who, as with Outlander or Hellboy, always seem to signal that a film's better than usual. He's a kind of anti-Liam Neeson!). Revolution is on the cards, and the only way that the means of production will pass into their hands is, yes, you guessed it, by fighting their way carriage-by-carriage along the train to get to the engine. A sort of occupy movement with cleavers. 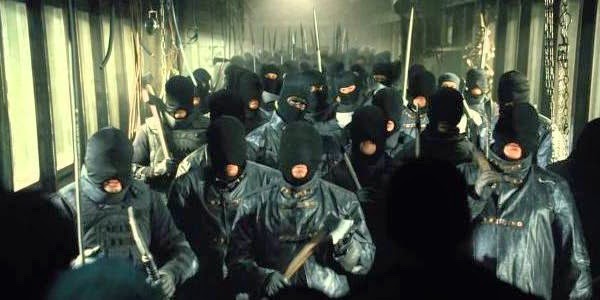 See? A childishly simple premise, yet its limitations allow Joon-ho Bong to utilise cunning and imagination to forge genuinely new slants on this post-gaming genre. The sequence where Curtis' band of future Bolsheiviks meet a black wall of 'state' troops (above) is an object lesson in protracted tension and release. And the action is so fast-paced that you completely forgive the obvious plot-holes or, in actual fact, the sheer silliness of the film's premise. By keeping the body count high and with some wonderfully written parts for characters such as The Host's Kang-ho Song as a junkie lock picker this film maintains its momentum like, well, a speeding train. 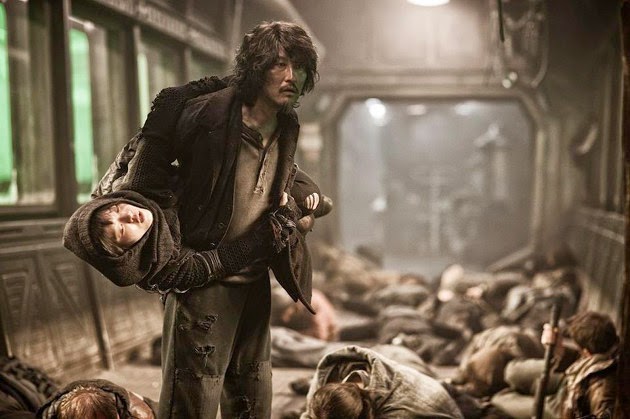 In many ways this premise reminded me of another great science fiction predecessor: Christopher Priest's Inverted World. In that 1974 novel the characters believe they live on a strange world in which the laws of physics are  turned on their heads and the city that they inhabit endlessly circles the globe on tracks which need to be laid as it travels. 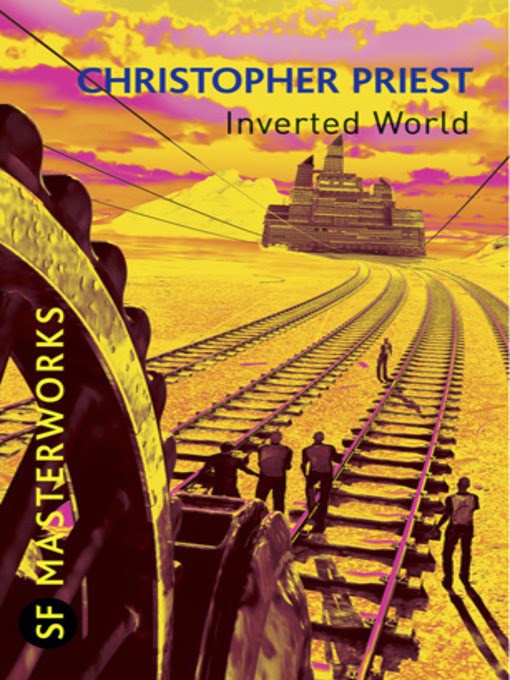 Just as in Priest's classic book, the train of Snowpiercer is not necessarily what it may seem and despite its almost Alice in Wonderland removal from reality you become utterly immersed in the film's internal logic. On top of this Evans gives a believably harrowing performance as a man driven not only by a sense of justice but a truly dark secret past, putting paid to the altogether blander white bread performance he gives as the Captain.

For his first movie in English it seems that Joon-ho Bong is already well on the way to achieving far more than John Woo did with ten years in Hollywood.

I predict a big cult hit, and no mistake...

*Oh, and at one point there was a really obvious reference to Kubrick's Shining, oddly enough...
Posted by Chris Jones at Saturday, April 19, 2014