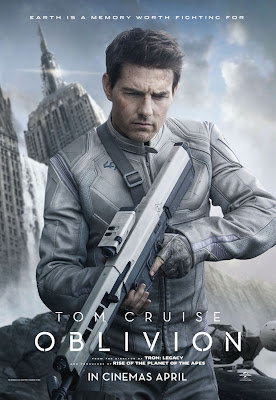 It's a funny old thing, but for a pretty cookie-cutter-type sci fi romp, Oblivion, the latest blockbuster from Joseph Kosinski seems to be getting an undue amount of attention. Well, that's if you go by the reviews.

Just announced on its opening wekend in the States as grossing nearly $38 million at the box office, in this country the Tom Cruise vehicle has been at the number one slot for the last week, although against such intellectual fare as The Croods and Scary Movie Pt 368 that's not really saying much at all.

In fact, just about everything I've seen so far this year, post-Oscars, has been mildly disappointing. Hence the paucity of reviews on this blog for a while I guess. There have been a slew of strange childhood fairy tale CGI monstrosities, of course. Jack The Giant Slayer - the very dictionary definition of 'two hours I will never get back'  - proved beyond a shadow of a doubt that Bryan Singer has now reached the absolute antithesis of his debut, The Usual Suspects. Oz The Great and Powerful, while not a disaster by any means (James Franco can ACT?!?) with its reasonably entertaining re-tooling of L. Frank  Baum's universe for the 21st century, was still a far cry from something which Raimi used to concoct such as The Evil Dead (although let's not forget those Xena credits).

But it's not just the schlock which has been schlockier than normal: Francois Ozon's In The House was nicely creepy in parts, but seemed too pat and satisfied with itself. Soderbergh's s (alleged) swansong Side Effects was a disappointingly inconsequential thriller with a twist, and a cast that all repelled in some way. Pedro Almodovar's I'm So Excited is just weirdly slight and seems to be saying something very sinister about his attitude to post-recession Spain. Even Paddy Considine's latest major performance vehicle, Honour, seemed clumsy, poorly acted in places, and even politically suspect, despite its brave subject matter (honour killings in urban Britain). Only Neil Jordan's forthcoming vampire-with-a-twist movie, Byzantium, has really got under my skin, and I seem to be in the minority on that one. I may still write about it in more detail soon, though. (Also it may be a good point to mention in passing a preview I saw for The Returned, a forthcoming French zombies-with-a-twist series that's coming to Channel 4 soon. It's really very good indeed and far better than the tripe that BBC Three are foisting on us with In The Flesh: but then, In The Flesh is aimed at teenagers, The Returned is very much an adult drama. For more details go here.)

So, to continue, why am I bothering to write about Oblivion, a film I've already described as 'cookie-cutter'? Let's run down the negatives first. Yes, as most reviewers have pointed out, the film's derivative. This is hardly a cardinal sin, especially in sci fi movies. I can't think of ONE sci fi movie or TV show I've seen in the last ten years that really made me sit up and think 'wow, now that's an original plot line' apart from, maybe, Battestar Galactica. As discussed many times on this blog, the very FUNCTION of sci fi, as commentary on modern society via allegory seems to be becoming increasingly irrelevant as we telescope into a real life situation where most technological or ecological shifts almost match our 'fantasies.' In other words, the future isn't what it used to be...

So Oblivion has LOTS of other movie plots wrapped up in its dystopian sweep, not least Wall-E (the film's ecological message is hammered home in Tom's 'secret garden' where he lives an alternative life in what looks like The Grateful Dead's holiday home, playing, of all things, Led Zeppelin II).

Also most critics seem hellbent on pointing out the somewhat dour nature of the script. Well, err... yes. The plot is about a decimated post-apocalyptic Earth where (supposedly) all humans have pissed off to Titan leaving behind Tom Cruise (as Jack Harper or Tech 47 - incidentally I was amazed that Tom's only played a character called Jack THREE times, I really thought it seemed like just about every character could have been called Jack) and Andrea Riseborough (as his comms officer and lover, Victoria) to maintain the 'drones' that police the surface, following an alien invasion, and maintain the gigantic plants that convert sea water into energy. Filmed in Iceland, the overwhelming greyness of Oblivion leaves you in no doubt that there won't be a huge amount of laughs.

And why should there be? No one criticises Haneke for a lack of mirth: the implication being that lowly sci fi has fallen so far from grace since 2001 that unless it provides enough spills, thrills and chuckles for the whole bloody family, then it's worthless.

Oblivion does provide spills and thrills. But it also dares to provide a reasonably intriguing plot that throws enough curveballs to keep you engaged to the last frame. We already KNOW from trailers that the 'aliens' are not what they seem to be, so that's no surprise, but the studio are canny enough to hold the big twists under wraps for long enough. This has the odd effect of making the first third seem a little workmanlike, but making the denouement reasonably thrilling.

Performances, especially from Riseborough, are uniformly good. Cruise may be a fully paid up Scientology nutcase, but one thing you can never say about him is that he can't do big films. And a big bonus (for me) is that Morgan Freeman is hardly in it.

Where the film really fails massively is in the post production, notably the edit that makes Tom give a portentous and (I realised halfway through) totally unnecessary expositionary voice-over at the start. This is quite obviously a device inserted at the behest of studio execs, scared that it may prove too confusing to let the plot just play out until the reveal. Remember that first cut of Blade Runner? Same thing... Maybe Kosinski will get to re-cut it in a decade or so. But it leaves us having to effectively listen to Tom explain the back story TWICE in one movie. Durr...

But what won me over (well, at least enough to want to write this post) is the LOOK of the thing. Most reviews have rightfully pointed out that Oblivion looks amazing, but it's often written off as mere eye candy.

Well, one of the things that makes so much modern sci fi a let-down is the fact that while all the studios no whave the toys to make a film look amazing (cf: Prometheus) they rarely seem to exercise any imagination or STYLE beyond the set norms. Kosinski, 38, has grown up using these tools and somehow seems to be offering something a little more special. His only previous directorial credits, apart from ads, belong to Tron: Legacy: a universally derided sequel to the Disney original which used  production design by none other than Jean Giraud: Moebius.

The film was rightly criticised for the fact that Kosinski seemed to have forgotten to include either acting or decent plot, but man, it looked good. In fact, to me, it looked so good as to make Kosinski worth watching. Here's a man who obviously knows not only his sci fi, but his graphic novels. Oblivion itself is based on his own unpublished comic. 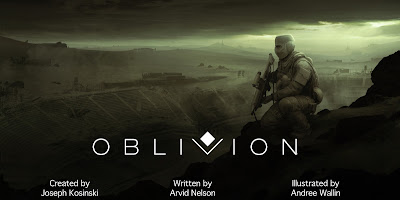 Now, imagine if he could be commissioned to bring a work by someone like Moebius to the big screen? The mind boggles. Yes, basing sci fi on pure aesthetics seems shallow, but maybe in a post-Iraq world where technology outpaces our own imaginations we need a new approach to sci fi that at least transports us. Such formalism may be (ho ho) alien to the average (usually male, and young) viewer of such things. But think about what was wrong with Avatar or Prometheus, or the last three Star Wars films. Actually, don't, because you'll be thinking for weeks, but primarily what I'm getting at is the PLOT and the poor actors, expected to deliver dialogue that no sane human would ever utter.

Audiences need a human element, i hear you cry. Well yes. But to marvel at our own imaginations is as human as you can get. No one criticises JMW Turner for leaving out the humans in his almost-abstract later works. 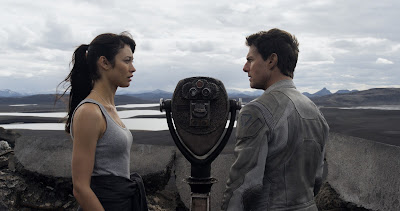 And if we want decent plots and believable characters we need scripts that go far beyond the average and challenge preconceptions: emotions that express more than shock, rage, fear or the most trite representations of 'love.' It seems an odd thing to say, but ennui and depression are just as much part of the human experience. Try reading some J G Ballard or Philip K Dick to see what I mean.

Above all we need adult cinema that uses these tools to forge a new aesthetic matched by rigorous intellect. Science fiction isn't dead, but we need to rescue it from increasingly infantile producers whose cowardly thinking stifles creativity.

Oblivion, it's necessary to say, isn't  such a film at all. It's deeply flawed, crippled by its compromises and never destined to be even a 'cult' classic. But, as an attempt to create things that make us think about ourselves for more than two seconds, it's really not the end of the world...

A dense movie with some very good performance and logic ..but then story contains some illogical facts and quite a few loop holes.......... but then again the way movie describes human emotion and technology is good

I've actually only just seen the film and was holding off reading yr review till then. As often, I think you pretty much nailed it.

It was really quite lovely to look at, which is clearly the most important thing. As Kabir suggests the plot had a few holes but at least it felt like someone had actually thought about it a bit. I was struck by the similarity to 'Moon' in some ways - clone achieves self realisation etc and sticks it to his creators.

The main problem with it was the usual Hollywood shtick that results in entirely unbelievable characters. Ms Riseborough probably got the most interesting part to play and as you suggest she's really good; so much so that she comes across as a more convincing human than the actual humans, who seem a dim and uninteresting bunch.

I could have done with less Morgan Freeman, definitely.

Chris Jones said...
This comment has been removed by the author.
2:13 pm

Cheers, amigo
Yup anything that involves LESS Morgan Freeman is a good thing.
You may also be interested in the Cruisemeister's latest SF offering, Edge of Tomorrow which is, I have to say, a jolly entertaining romp.