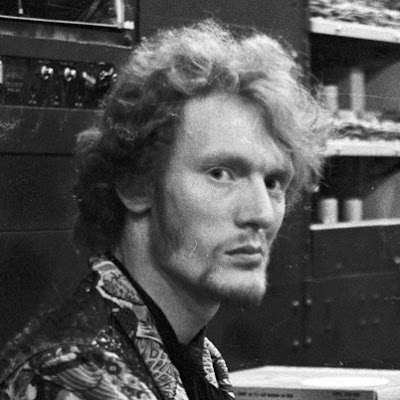 If the title of this forthcoming documentary by ex-model, boxer and Rolling Stone writer, Jay Bulger, doesn’t give you enough warning the first minute will. It starts with hand held footage of Bulger being screamed at by the titular Peter Edward ‘Ginger’ Baker. “I’ll put you in fucking hospital” threatens Baker waving a steel handled walking cane (handle first) in the journalist’s face. “Are you really going to hit me with that stick?” asks Bulger (somewhat naively, considering he’d just spent months getting to know Ginger and must have known what was coming). And yes, seconds later the legendary drummer does just that, leading to one split nose. Beware of Mr Baker could well be one of the rawest, angriest and funniest documentaries you will see this year.

Even if you know nothing of Baker’s history as a jazz drummer who got his first big break during the British blues boom with The Graham Bond Organisation and thence to Cream, Blind Faith, a sojourn in Afrobeat and so much more (and, if anything, Bulger’s film manages to educate just about ANYONE who thinks they know it all) BoMB is great entertainment. At the screening I attended everyone spent the first half guffawing at a man who deserves to have his picture in dictionaries under the entry for ‘pugnacious’.

Robbed of his father during the last months of WWII at the age of four, Baker has spent most of his life, as his first wife says, looking for a replacement. Unfortunately all the role models he chose were less than exemplary. From jazz legend, Phil Seamen (who turned him on to African music… and smack) to Eric Clapton and Fela Kuti, everyone in Ginger’s life seemed to have let him down in some way.

This is very clever film making at every level. The archive fiootage is amazing (especially the Fela period) and while you get a raft of contemporary drummers singing his praises in somewhat sycophantic fashion (stand up Lars Ulrich and Chad Smith) their remarks are always shoehorned next to something that really brings home the reality. Wives are subtitled as ‘Wife number one’ etc. pulling no punches on Baker’s extra-marital dalliances, while drink and drugs (especially heroin) are never whitewashed out. Fortunes are squandered (more often on horses than anything else, surprisingly), friends and children abandoned.

The testaments of his son (also a drummer) are particularly painful. He recalls his dad at an early gig of his offering the 14-year old a line of coke to overcome his jitters. As his mother says: “Ginger always wanted a son, but when he got one he wanted nothing to do with him.”

And yet, over and over, musicians come out of the woodwork to sing his praises. And when you see the old films you can see exactly why. Ginger was a simply incredible drummer. Eric Clapton (who Ginger refers to as his only true friend, even though Clapton admits that the drummer forcing his way into ‘supergroup’ Blind Faith probably led indirectly to his own breakdown) seems to have all the respect in the world for him. And most affecting is the lovely Jack Bruce. Having been brutally assaulted (as well as having a knife drawn on him) by Ginger you’d expect the man to be a little cynical. But his last words are “I just love him. You know?”

Musically Ginger’s definitely passionate AND knowledgeable – how could a man who’s played with Elvin Jones, Max Roach and Tony Allen NOT be? – but he has little time for the accepted peers that forged ‘rock’ drumming. Keith Moon and John Bonham get especially singled out as second rate. And when Bulger teasingly asks Baker about Cream’s reputation for starting heavy metal his only response is “fuck heavy metal.”

If there’s a downside to all of this it’s undoubtedly the animated segments that mark each shift in Ginger’s fortunes, portraying (actually, quite cleverly) the drummer’s life as a slash and burn voyage of a Viking slave ship around the globe, its oars driven by primal African rhythms, as well as illustrating the juicier parts of his early career (including the famous time that he beat up Jack Bruce ONSTAGE, before throwing him out of the Graham Bond Organisation). It doesn’t cause quite the same level of irritation as, say, the recent Graham Chapman biopic, A Liar’s Autobiography – but then, that was entirely animated - but the (now common) device of animating stills (cigarette smoke, that weird zoom against a static background thing etc.) is getting out of hand. It makes you long for the return of Ken Morse…

Bulger plays provocateur to the max, but you sense that he learned this technique when researching his original print piece for RS, which went under the same title. It’s hilarious watching each question being greeted with an irritated shake of the head while another fag is stuck between the teeth in the most aggressive way possible.

Ginger’s life now is portrayed a, well... fucked up beyond belief, watching daytime cop shows in his South African ranch (where the driveway sign that gives the film its title resides). As his son tells us, the £5 million he got from the Cream reunion has gone, whether on horses or bad judgement, it matter not. His current wife (number four) frankly looks at the end of her tether, though his interaction with her daughter seems genuinely warm. But even at the end, there’s a surprise. Ginger Baker, it seems, is one of life’s supreme survivors. And as John Lydon lovingly says of his hero: whether you approve or not… he doesn’t really care one bit.