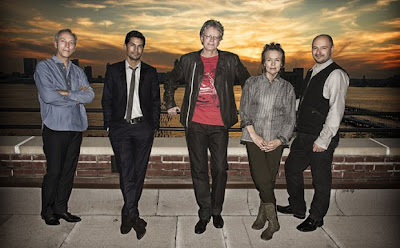 Back from an extended trip to Western and Southern Australia. Various photographs prove this to be so… And while there I was privileged to visit both the Perth and Adelaide Arts Festivals. Both were reasonably distinct and reflected the differences between two of the most remote major cities in the world. But one thing linked them - Laurie Anderson, who appeared at both festivals albeit in  slightly different guises.

In Perth she brought her new collaboration with The Kronos Quartet: Landfall while at Adelaide she repeated the performance but also appeared in her 2011 solo piece: Dirtday as well as having an exhibition of visual work: The Language of the Future Selected works 1971 – 2013.

In brief  - mainly because I seem to have an awful lot to catch up on here in the next few days - the LA experience was a bit of a curate's egg. To contextualise (as I love to do) I've never seen Laurie live before. Always admired her from a distance, but never really was won over by her recorded work. I remember commissioning this review back in the day of a 'deluxe' reissue of her biggest album - the appropriately named Big Science - and remembering how, well… dated it sounded. Any art that attempts (bravely) to fuse modern technology and expression runs the huge risk of becoming rooted in a moment. For this reason alone a vast amount of music recorded between 1985 and 1995 sounds massively creaky. And for that reason along with friends' enthusiasm, that I always hoped I'd see her live instead. But the experience was at least 50 percent disappointing.

So what was it that was missing? Anderson's work is unmistakably  indebted to her home town of New York. Landfall is filled with references to Hurricane Sandy and its effects on that city.  I have no problem with a master storyteller weaving in moments of personal reflection, yet when Anderson gets to the parts that concern her basement and the loss of all her possessions in storage you begin to balk. It betrays a very American trait of self-referential art that borders on self-indulgence. There were massive opportunities here to address universal concepts but the overall emotion it raised in me was dangerously close to boredom.

Compounding the  implausibility of the piece really saying anything useful was the fact that the programme notes describe Anderson as 'daring.'  As stated, anyone who tries to marry 'new' tech to art IS being daring, but the results can so often disappoint.

On paper this may be true, but the Quartet's layering of often drone-like pieces beneath the words seemed so polite as to negate any really useful response or accompaniment. This was not 'daring' it was irritatingly polite and resisted engagement.

The knitting together of narrative text and music became not 'polyphonic' as Anderson claimed but merely disjointed and after a while actually irritating. As Simon Hopkins recently pointed out when writing about a recent gig we attended: often the role of visuals in performance ceases to be complimentary and  becomes mere distraction. Anderson's 'unique software' spewed unintelligible symbols and vague abstraction that seemed to point to nothing other than the impossibility of language to hold meaning. When paired with such strong narrative (from Anderson) the two seemed to almost cancel each other out.

Yet a huge aspect of Anderson's work involves her skills as a raconteur and her work in Adelaide seemed to bear far more fruit than the restrained Landfall.

Her solo piece, Dirtday, is far better suited to her avant garde stand-up schtick (I'm aware I'm being a little harsh). Here her vaguely Buddhist tales about her dog Lolabelle etc. worked far better; told on a candlelit stage and at all time engaging and far more hum in scale (for a while I wondered at the monomaniacal aspect of constantly referring to and anthropomorphising a much-loved pet, but then wondered if I could do the same with one of my deceased cats).

And as if to almost taunt anyone who held out for her immense skill as a musician, when she returns for her encore - a very brief solo viola piece  - she was able, in the space of a couple of minutes, to reduce me to tears. Maybe my own purism will always prevent me from appreciating someone who is so fabulously adept in several disciplines at once, but it struck me that just for once I would have been happy with just the music.

Finally onto her exhibition: The Language of the Future Selected works 1971 – 2013. In truth, for a performance artist Anderson's value as a 'visual' artist is limited at best. This isn't to decry her value as an artist whatsoever, but in an exhibition with very few pieces, the overall impression was either of old, edgier pieces preserved in aspic, or of too much 'novelty.' The first major piece, involving multiple video projections on square piles of scrap paper (apparently the Adelaide phone book) like little topographical models, was exquisite. Here again, her innate skill as a storyteller comes across, although I'd happily never have to look at another of her drawings of the aforementioned pet dog again. After an evening where the audience were treated to viral videos of her dog playing the piano, it seemed like there'd been quite enough pooch.
Posted by Chris Jones at Monday, March 25, 2013