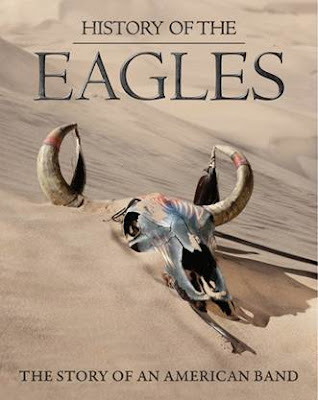 I never really GOT The Eagles.

Like many significant cultural landmarks that I couldn’t quite understand, I used to wonder if it was a fault in me. But, truth be told - and a little like post-Peter Green Fleetwood Mac - it was more to do with what they represented. In the mid-‘70s, West Coast, me-generation rock (with country flavourings) hardly said anything to a teenager from the West Midlands. Cocaine was a rich kid’s plaything. Palm trees, designer denim, aviator shades and WAY too much facial hair looked oddly wrong in the grey post-industrial landscape and besides, the NME hated them.

Only in more recent years have I come to appreciate the finer moments of the band’s canon. Glenn Frey’s heartache-touched-with-cynicism lyrics, Don Henley’s voice, the smooth four or five part harmonies, the crisp twang of guitars and, above all, the sleek, crafted writing – these were all things that as a 16 year-old I cared less for, but as a mature adult have come to appreciate. Appreciate, but not love.

For this reason alone I welcome The History of The Eagles – a DVD that finally puts the band’s twisty story in some kind of context for an ignoramus like me. 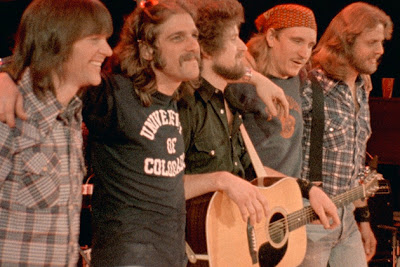 Technically this two-hour film (in truth this review only covers part one of a two-parter that takes you up to the band’s break-up in 1980) is standard BBC Four band documentary-type fare done with flare and with exemplary access to the archives, much in the same way that the recent Crossfire Hurricane did. And while the depiction of band’s juvenile years - relying too heavily on the ‘entertaining’ stock period footage (shots of teens in cars listening to rock ‘n’ roll etc) - clings to formula a little too much at times, I would imagine that for any big fan this is a real treat and genuinely conveys what superb musicians they became.

As with all ‘legacy’ acts who have such a lot of history, the real enjoyment is to be had in matching the band’s own (often conflicting) versions of events with the glaring reality that lurks beneath, as well as the amusing contradictions thrown up by petty squabbles, coke-inflated egos and road-weary infighting. Particularly ironic was Randy Meisner’s exit from the band for refusing to sing Take It To The Limit over and over again; which presumably now means that he’s doomed to perform it ad nauseum in second-rate tribute shows.

Glenn Frey comes across as a man who’s laughed his way to the bank enough to shore up his own arrogance.  His ire at Don Felder still burns (probably because Felder tried to sue the band after leaving them again in 2001 – although his reasoning that Felder resented playing a political benefit in 1980 because he wanted to pocket the cash seems fairly hypocritical considering Frey’s own obvious ambition to write hits).  All the shots in mellow early ‘70s LA are undermined by one clip of him playing softball with the band and crew where he comes across as rather a dictatorial bully.

Don Henley, with his working class catholic Texan background, is the very definition of steely-eyed pragmatism. As Joe Walsh keeps mentioning this was a bunch of ‘alphas’ who, like the Stones, got their kicks by playing the boyish ‘last man standing’ game, egging each other on to greater excess. Although what excesses there were are merely hinted at. Frey does candidly mention the cocaine blizzard that surrounded the band and turned individuals into petty tyrants terms and their last gig into a public squabble that ended with Felder running away into the night from a furious Frey. I didn’t stick around to watch part two, which details the band’s reformation in 1994, but I’m guessing there’s no mention of Henley’s famous underage sex scandal or the legendary fridges full of marching powder that accompanied them on tour.

One thing this DVD doesn’t do is contextualise the era too well, assuming that the viewer just KNOWS how the band sat in the musical landscape at the time. But it seems fitting for a band who with their private planes and sales of one million albums a month for one 18 month period effectively escaped any kind of reality. At one point Frey talks about the political backdrop (Vietnam, Watergate, Nixon, riots and assassinations in ‘68 blah…) and then puts forward the amazing insight that the band became popular because people wanted to ‘have some fun.’ Such a reactionary stance is unwittingly perfect for the band’s blend of rock, country and five star success.

This is maybe what slightly more cosmopolitan UK critics of the time picked up on, along with the venality. Gram Parsons' contention that they were ‘plastic’ (actually he said something slightly more discouraging than that, but let’s move on) seems, these days, like the whingeing of someone jealous and destined to be forever consigned to cult status (and who also lost their guitarist to the band) – but there’s no denying that at the heart of this story is good old American conservatism.

Weirdly, in the same way that Kiss somehow represent a strata of middle American culture which we weedy northern Europeans with all our history and shit could never understand, The Eagles seem a very American proposition. Even director Alison Ellwood seems to share the band’s inability to think beyond US borders by signalling the band’s recording sojourns with Glyn Johns in London by using footage of red London buses in Picadilly and even a policeman on a bike (prompting sniggers from the audience).

Another aspect that’s glaring is the lack of ANY female involvement other than as either naked stage-invading fans or as worryingly young groupies glimpsed in hotel room Super 8 footage. Henley talks about how him and Frey tried to have relationships while on the road but ‘work kinda won over.’

It’s Joe Walsh who (predictably) provides the laughs and, despite his self-confessed mental issues comes across as sanest of the bunch. Next to the studied cool of Frey and Henley he’s a relief, and, for once, his anecdotes about Keith Moon and John Belushi aren’t tedious, but provide welcome relief. Henley comments that they liked Walsh’s pranks ‘up to a point’ and his 28,000 dollar hotel room-trashing exploits are explained as away as giving the band more rock ‘n’ roll kudos: something that had eventually driven the more purist Bernie Leadon away.

The combination of a profligate lifestyle and grim ambition seems odd, but by this point in the band’s career the chemicals had taken hold and power struggles and a desire for more success was souring the antics. It’s no wonder that Bernie Leadon signalled his departure from the band by pouring a beer over Frey’s head and telling him to ‘chill the fuck out.’ 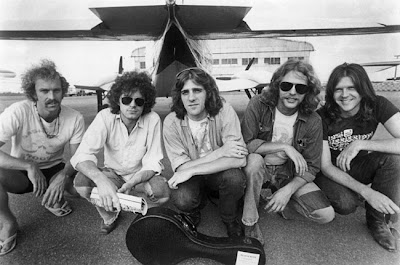 But finally, The History Of The Eagles does its job extremely well by leaving out no key players. Here is David Geffen: vilified to this day by some members for not only daring to hang on to 50 percent of their publishing royalties – a canny trick he did with all the artists he ‘cared’ for on his Asylum label – but for getting fantastic space case design duo HenryDiltz and Gary Burden to glue shut their fold-out poster sleeve for the first album. Here’s archetypal miniature Jewish powerhouse manager, Irving Azoff, who won the band’s undying allegiance by bullshitting his way out of a drug bust for the entire crew while on a poker trip to the Bahamas. Here’s the erstwhile country genius of the band (and in truth their only real connection to country music), Bernie Leadon – balding, serious and obviously still conflicted over the push and pull of fame. And one can’t help but feel sorry for Timothy B. Schmit who joined the band for their final, excrutiating two-year recording of what Bill Szymczyk laughingly calls ‘The Long One,’ just before they finally imploded.

Like the aforementioned Crossfire Hurricane, The History of The Eagles maybe signals the dawn of a new breed of rock documentary where bands can at last be more open and less uptight about their legacy, and after two hours you definitely come away feeling like you too have been on the road with The Eagles for ten years.

Nicely done _ I'd like to see this I think. I had similar feelings about The Eagles. They seemed decadent in a self-aware kind of way that probably annoyed the punks etc in a way that Yes or Genesis couldn't manage. I got so sick of Hotel California on all the time, everywhere. That, 'Kiss Alive' and 'Rainbow Rising' seemed to be the only records my schoolmates owned. But I did like 'New Kid in Town' and still do.

Mr B. Schmitt seems to have been Bob Harris's very special guest on his show a number of times, so I hope he still gets the odd free lunch.

It's well worth seeing imho - even if you hate the band (which I don't, but feel like I should for some reason). And yes, Hotel California was so ubiquitous it was unbelievable - 14 million sales in 14 months - NO record would sell in those quantities any more.
For some odd reason I always thought the beginning of the title track was v similar to something by Genesis. All those 12 strings, I guess...