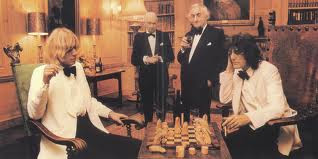 There was a time when 'rock' stars died and it was a tragic curtailment of a short, youthful and (usually) reckless life. Real romantic stuff.

Of course as me and my contemporaries wind down into middle age the heroes start dropping more regularly and with less chance of them passing into legend, if only because they had the bad grace to live too long. Singer songwriter Kevin Ayers has just passed away at the age of 68, which probably means he'll get a decent Mojo/Guardian obit and that'll be it. This review of The Confessions Of Doctor Dream (possibly his last great album, although I still have a fondness for its follow up, Sweet Deceiver) refers to him as 'undoubtedly one of this nation's lost treasures' and, in an industry that with each passing day gets more weighed down with hyperbole, I stand by that.

A founding member of The Soft Machine, compadre of other Canterbury acts like Gong and the man who gave early exposure to people like Mike Oldfield, Lol Coxhill and Steve Hillage, Ayers was the very epitome of middle class, English, louche anti-materialism and original hippy laissez faire: more content to bask in the Majorcan sun than endlessly promote himself or kowtow to the MAN.

His place in rock legend is secure, if only because he was the ''bugger in the short sleeves'' mentioned in the first line of John Cale's 'Guts' (hence the odd stare they give each other on the cover of June 1, 1974). The aforementioned Dr Dream... album came at the time where Kevin moved from EMI's house hippie label, Harvest, to Chris Blackwell's more bread-headed Island records, and attempted to turn himself into some kind of pop star.

It was never going to happen, thank god. Despite the blonde tresses and voice like dark chocolate on a rich tea biscuit, Kevin was always going to be the also-ran, known to a discerning few. It was undoubtedly the way he wanted it.

While his earliest solo records such as Joy Of A Toy; Whatevershebringswesing, Shooting At The Moon and Bananamour contain some of the sweetest, most English of songcraft, they also contain a fair smattering of strange, avant garde fare. And this was Kevin's greatest gift, the ability to move effortlesly between the sweetly affected Edwardiana of 'Girl On A Swing' to the out-there abstraction of 'Pisser Dans un Violon.'

Here's my favourite moment of Kevin, right on the cusp between those worlds: