Being such a Jack of all trades I'm still occasionally prone to making music with others, especially when asked nicely. At the end of last year I was proud to be asked to contribute to a couple of the projects currently underway by Simon Hopkins.

One of these - the Abyssal Labs project, which concentrates on industrial ambient drone work for urban meditational purposes, has already been mentioned on this blog. Soon to be released on his Bandcamp site, Fourth is, erm... the fourth Boom Logistics album which features contributions from Pete Marsh on double bass, Matt Walton on acoustic guitar and myself on electric guitar. 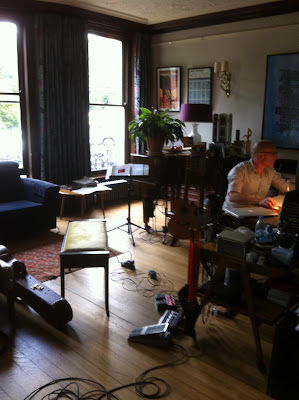 My parts were all laid down in Simon's front room in one very productive day last year (see pic above). A testament to the power of mindfulness! I was reasonably proud of my contributions, but Simon's worked long and hard on recontextualising them in a series of dark drifting pieces.

Several previews have been placed on Youtube in advance of the actual release, and here they are. Many thanks to Simon for making me sound like a proper musician.