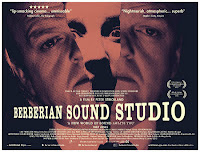 For anyone with an interest in trash aesthetics or sound design, Berberian Sound Studio Peter Strickland's second feature, is for you. It lampoons the giallo horror flicks that came out of Italy in the '70s while paying homage to the genre and the technicians who endured the screams, outre prog rock soundtracks and body horror FX that had to be dubbed on in post-production. The film is peppered with in-jokes and references to avant garde musicians and pioneers in sound techniques (the Berberian of the title refers to Cathy Berberian, experimental singer and wife of composer Luciano Berio) and the narrative is punctuated by the clunks of tape heads, the hiss of electronic noise as well as the ghostly wail of desecrated young women.

This is in many ways the blackest of comedies. Gilderoy - an obsessive nature documentary sound recordist who's mixing skills are honed in his garden shed - is shocked as soon as he arrives from England to find he's working on a giallo - a low budget shocker full of violated virgins and gibbering goblins (another in-joke referring to Dario Argento's house band of choice). The biggest joke is that the name of the film - The Equestrian Vortex - obviously made him think that he was working on a documentary about horses.

Toby Jones is perfect as Gilderoy. As the film progresses he looks more like Droopy, becoming more hangdog with every close-mic'd murder of a vegetable in pursuit of the most realistic foley effects. Like him, through his beloved world of sound, we begin to loathe the violence wrought on these innocent comestibles in the name of garish schlock.'NEVER call it horror' says director Santini (Antonio Mancino) in one of his memorably florid appearances: a brilliant caricature of a film-maker proclaiming himself an artist whilst groping the actresses and never paying anyone.

Everything about the world of Berberian Sound Studio seems Kafkaesque. Gilderoy can't even get paid for his flight: each attempt to get recompense is met with a stoney insolence by Bond girl Tonia Sotiropoulou as Elena. Everyone is either hostile to Gilderoy, or baffled by his obvious discomfort at being in close proximity to hot-headed mediterraneans; especially his snippy producer, Francesco, played with chiselled anger by Cosimo Fusco. Even the one actress who seems determined to join Gilderoy as an ally against the exploitation (Fatma Mohamed as Silvia) could just be using him for her own revenge.

The film is shot through with Lynchian dreamscapes, predictably awesome sound design and a suitably out-there soundtrack by Broadcast, But the cherry on the cake is the loving attention to what can only be described as retro-technology porn. But this is as it should be - for Gilderoy's real love is for sounds and the equipment that captures them. Only the tiny spiders trapped, like him, in the studio, really elicit his sympathy. He remembers microphone model numbers more easily than human names. In his suitcase is a tape of sounds from his home. These he weaves into the soundtrack of the film itself while his mother's letters from Surrey become increasingly hysterical and the line between reality and fantasy become increasingly blurred.

Eventually you're left disorientated, and in a freeform state of mind. Does Gilderoy find salvation from the demonic work he's forced to work on? Has he entered the film itself? Luckily Berberian Sound Studio refuses to give any answers to these questions - leaving you more unsettled and ill at ease than if you'd actually watched one of Dario Argento's movies.