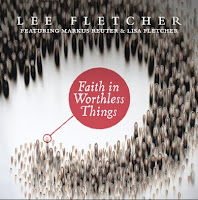 Late, as ever to the online party that is singing the praises of good pal Lee Fletcher, but here I go...
Previously featured on this blog, Lee's forte is SOUND. Seriously, the guy has the kind of golden ears that (especially if you're like me) make you realise that you're hearing the world in a slightly different, almost LESSER way. Repeated headphone listening makes his latest album, Faith In Worthless Things, a constantly unfolding landscape, filled with detail that uncovers itself with patience. A lot of work has gone into this.

FIWT is admirable on several levels. Most important, for anyone who's considering any kind of career in music and whether you like Lee's stuff or not, is the method of distribution. FIWT was produced using the Pledgemusic system of financing releases. Via social media Fletcher called on fans and friends to pledge money for various subsequent packages, from simple downloads through to signed and limited physical iterations of the album. This had the twofold efect of cutting down marketing costs, while getting directly and effectively to his core audience. At a time where the very fabric of the music industry unravels daily it becomes an inevitability that more and more 'serious' work gets sidelined, so this seems a fabulously lithe business model to raise the cash for distribution and production costs. And interestingly, featured artist, pedal steel player to the stars, B J Cole, is doing the same thing right now.

So, having identified his core audience, who IS Fletcher aiming at here? It'd be easy - seeing as FIWT is mainly played by folk who inhabit the various circles that surround and venerate Robert Fripp (who contributes a suitably astral soundscape on The Answer), to say that this is erm... 'intelligent prog'. But there's far more at work here. No Spock's Beard monstrosities abound, instead we get a record that contains not only the requisite tricky time changes and occasional mathematical undertow, but also a healthy dose of perfect pop (mainly provided by the whispered voice of partner Lisa Fletcher) as well as folk, grittier extemporisation and even elements of nu-jazz.

At times there's a sense of an odd fit. Music like this doesn't really acknowledge such bourgeois conceits as 'genre divisions', but mainly these juxtapositions surprise, confound expectation and delight. The very elusiveness is what makes FIWT intriguing and keeps the listener coming back for more.

With a cast like this it's no wonder that things get pretty King Crimsonesque at times. Markus Reuter (recently one third of Stick Men with Crimson alumni Tony Levin and Pat Mastelotto) and his touch guitar wig-outs form a major piece of this jigsaw - groaning and straining against the more polite Englishness of Lisa's voice.

It's this sense of a very Anglisised rural idyll countering the grind of Fletcher's more industrial work that gives the key. This is essentially an album that pits reality (nature, emotion, heart) against the venality and emptiness of 21st century culture. This can take us from the gorgeous delicacy of Miracles On Trees, with its chiming guitars and birdsong, to the jagged assemblage of Until The Playtime Whistle Sounds.

As such, FIWT has a rawness and honesty that's at odds with its polished outer shell, but which makes it far more worthy than 99% of what crosses my desk these days. We need to be thankful that work this beautiful still gets made.


Lee's album: 'Faith In Worthless Things' is available eiter as a download or in physical form here
Lee's blog is here
Posted by Chris Jones at Thursday, August 23, 2012