Hurrah for this. It still pops up in my mind on a regular basis. posted by Tom Coates six years ago, it signifies a kind of lost Golden Age to me, when the people I worked with, at least tangentially (they worked in the same office) were making great leaps forward in online thinking. While I hardly understood what Tom, Dan or any of those other brainy guys were doing, I was infected by their self belief - a quality I seem to have a minus amount of - and the way in which they taught me not only to use the web but how to enter into the spirit of the web. I didn't pretend to understand most of it, and I doubt Tom even remembers me, but this picture stands for something i still believe in.

I'm quite aware that the WAY I use the web these days is positively neanderthal, being the equivalent not really of a quill versus a touch screen interface, but more like some cave man banging his head against a cave wall and writing something crude in his own blood. But I did at least learn a little about the semantic web, the possibilities of what we quaintly used to call web 2.0 and erm… alt tags. A swerve of events and I'm working in social media: a field that is fabulously buzzy and equally venal. In fact more venal, let's be honest, now. I'm not, and have never have really been in the business of selling things. That doesn't mean to say I haven't DONE it. I was, after all, a bookseller for over a decade. But looking through these pages i wonder if anyone thinks I'm just being a second-rate PR company? Which brings me onto this:

In the tradition of middle-aged self-examination, I've been trying to reassess what exactly 1) this blog, 2) my photography or 3) my music are FOR. As Balthus said:
[Art] is also work, self-examination, consciousness, criticism, struggle.

The first of the three is best answered here. Not that this is in any way definitive, merely an attempt to make it clearer for myself. If you flick back through the virtual pages of this stupid thing you'll find that most reviews or commentaries - post-my questionable Lost-watching days - are mainly positive. They're about things that I loved and want you to see if you have eyeballs and opposable thumbs. How bland…

Well, yes and no. I do seem to have a gift for the hyperbolic. Everything's 'fantastic' and amazing' and 'genius'. This is now often hatefully branded as 'passion'. Everyone must now have 'passion' for his or her field. It's what helps a sad little blog like this become widely read. 'What comes across is the passion for X': how many times do you hear that a day? Food, clothing, the manufacture of dog biscuits. They can all be done with passion.

Well, my point is that the word's overused (in much the same way that 'genius' is) - and that this blog's full of 'passion'. So where's the critical distance that I grew up worshipping in MY favourite cultural critics? I read a few of my old reviews and I see a flash of that sometimes: the ability to constructively pull apart a faulty mechanism and point out its flaws with fairness and erm… passion. But it mainly got me into trouble.

At some point in the early part of the 21st century, in tandem with the rise of the internet as our prime means of communicating, we lost the ability to handle such stuff, often it seemed for fear of offending the people who were possibly passionate for something that you passionately hated. The result of this cultural shift was the awful five star 'marking' systems that blight arts pages. While the writing's often exemplary (YOU try summing up anything in less than 250 words) it still leads to lazy reductionism - three being bad and four good - for the reader. This is why I always hated the Observer Music Monthly. It made everything seem great. But everything isn't great. 90% of it is bad or mediocre. 9% is perfectly nice. And maybe 1% is truly marvellous.

I've long-since decided to eschew some quixotic crusade for a critical press that tells it like it is. I even understand why any culture needs to prop up its own infrastructure by constantly coaxing people to try new stuff. Most people don't consume it, or at least only a fraction of what's on offer. Culture needs all the help it can get. But I now realise that this blog should 'fess up to the fact that in most cases my hymns to the latest film/play/book/album/gig that gets me scribbling are there because I genuinely love whatever it is. This blog is also not a brothel. It will not sell you stuff that is useless: only recommend stuff that you're free to reject, or disagree with. And above all; stuff that I do really feel has some kind of worth. 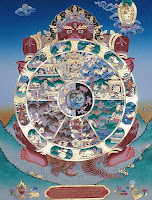 The 'irritability' quote in the blog title (from this) doesn't imply that I want to be angry all the time: find pleasure in being mean or gratuitously negative. In fact, it means that I react to those things that make me feel something. pleasant or unpleasant. Also, as a man who truly believes in the concept of Karma, I fail to see the point of using this blog to merely bitch about all the things that make my life, your life, anyone's life more of a living hell than it already is.

I'll still reserve the right to write more critical prose. Ridley Scott's Prometheus was such a giant let-down that I felt compelled to at least point out WHY. If only, again, more for my OWN purposes: writing does help you think more clearly. And I've actually held off writing about Christopher Nolan's third Batman movie, just for the reason that I loved it so much that I would easily exhibit more of that puppy dog passion. But in the end, you'll just have to trust me. If I write about something in glowing terms, I mean it. I really do. my next post will be about two films about London that I haven't seen (one by Julien Temple, one by Iain Sinclair and Andrew Kötting) and may contain references to the Olympic opening ceremony (despite my promises not to write about the Olympics): I'll probably love 'em. Just warning you...
Posted by Chris Jones at Sunday, July 29, 2012

Great post. I've been asking myself the same type of questions about my own blog lately. Mainly, what do I hope to accomplish/convey with this blog, and is it worth the effort?

Keep up the great work -- I really enjoy and learn a lot from your blog!