Little Things That Mean So Much pt2

As a follow-up to a recent post here's another prime snippet that always makes me smile. 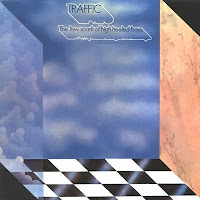 This time it's Paul Weller's favourite soul hippies: Traffic. From their jazziest (and best) album, this is definitely a case of: 'we're not going to do any better than that, lets' keep it, boys'. Especially so as this moment comes right at the end of an otherwise flawless track: A stately samba with some sublime sax from Chris Wood followed by a Canterbury-esque slice of fuzz Hammond from Winwood (sacrelegious, I know, but I always considered SW a better instrumentalist than either singer or writer), then back into verse and chorus and a final flourish on the organ from Stevie. But right at the end of the flourish? A chord which takes the breath away with its WRONGNESS. A bum note or a brave attempt at Schoenberg-like atonality? The devil's triad? Who knows... but the best thing about it is that Stevie, in the true spirit of the improviser, lives by his mistake and lets it hang for a full 15 seconds before fading. It's genius, and I don't often say that about anything Paul bloody Weller likes (apart from Nick Drake, John Martyn blah blah blah).
Posted by Chris Jones at Wednesday, August 26, 2009