A minor pleasure is still a pleasure worth sharing. My love of B movies, whether they be old or new (and I'll fight anyone who says they're not being made any more), drew me to this little beauty.

Outlander (Howard McCain, 2008) attracted my fleeting attention because of its premise. Aliens vs VIKINGS? Like, awesome, man. And so it proves to be...

Jim (James) Caviezel (The Passion Of The Christ, The Thin Red Line and Number 6 in the forthcoming reimagining of The Prisoner) plays a man from another galaxy who crash lands on Earth in the year 709AD and inadvertently sets free the Moorwen, a bioluminescent beast, in the heart of olde worlde Norway. Like all the best B movies it makes no bones about its mongrel origins (one poster even called it 'Beowulf meets Predator', which is just about what you're getting here, down to the finale's big cave face-off and a lot of non-historical nonsense about shield maidens, mead and suchlike). In this way it differs from a film like Sunshine (which I talked of many moons past here), where although the thievery was rife it still tried to pass itself off as 'serious'.

No such nonsense here: Jim, the handsome hunter, Kainan, from the stars, does a good Christian Bale-with-fighting-skills act. Sophia Myles plays the feisty (ie: no make up and a good way with a blade) heroine, John Hurt brings a little gravitas as King Rothgar and there are some great cameos from the likes of Ron 'Hellboy' Perlman who plays Gunnar, the rival chieftain with a nice line in skull crushing war hammers. 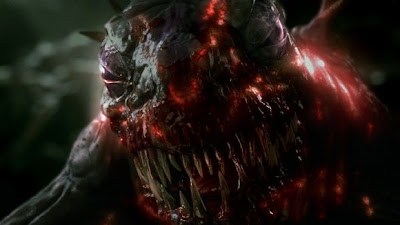 The alien is an amalgamation of, well... the Alien, Predator and something out of Jurassic Park.

It's a hoot and, as it's just getting a release in this country on DVD, I heartily recommend it for an evening's jolly entertainment. C'mon... Vikings, aliens, big swords, decapitation; how could you resist? Which is ironic as at the box office everyone DID. Apparently it only grossed 6 million dollars worldwide against a budget of 47 million. Pah.
Posted by Chris Jones at Wednesday, September 02, 2009