No, I didn't catch the Charlie Chaplin retrospective at the Ritzy, I watched (or was that ENDURED)'Downfall' last thursday night on Channel 4. Phew...talk about light entertainment. the laughs just kept on coming etc. etc.
Ok, it was a harrowing coupla hours that left you in equalparts appalled, mesmerised and (strangely) uplifted. The last could have just been because you felt proud to have made it through the sturm. But that aside, Bruno Ganz is astounding and this study of the reich's last gasp is beautifully paced. The first half hour seemed mundane and then you suddenly found yourself utterly unable to look away. Sound design was key to building the terrible sense of claustrophobia, and by the second half the sense of the sheer WEIGHT of history bearing down on these lunatics was palpable. Like karma times a zillion, all brought to bear on der fuhrer by the Russian artillery.
A friend pointed out that NOT seeing the crucial moments when Adolf and Eva (and Goebbels and his frau) bit the big one might be construed as the Germans still determined to give them some dignity, but I think it was just avoiding any charges of gratuity. Added to this, the prolonged scene where Frau Goebbels murders her children leaves you in absolutely no doubt as to what kind of monsters we're witnessing here. The worst shudder came when she said to her kids earlier in the film: 'let's go and see Uncle Hitler!' and they all go 'ja!'. Creepy beyond words.
> 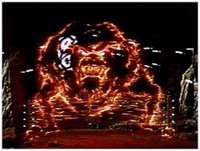 On a lighter vein I spent a proprtion of the weekend re-viewing some old sci fi stuff during Channel 5's 'Sci Fi Weekend' (natch). Forbidden Planet? Utterly marvellous, as always. The monster from the id (see above) still spooks me, while a very young Leslie Neilsen is hilarious as he pulls rank to get the space babe! A role model for James T Kirk if ever there was one!! But more interestingly the whole idea (originally lifted from the bard's Tempest) was then exposed as being TOTALLY ripped-off in the later showing of the excerable Sphere. Not only that, it was so obviously high in the minds of the creators of Lusht too. Island? Invisible monster? Caliban ahoy!!
Oh, and I watched episode 15 of series 2 of Lusht. But I promised I wouldn't talk about that any more...
Posted by Chris Jones at Monday, March 06, 2006