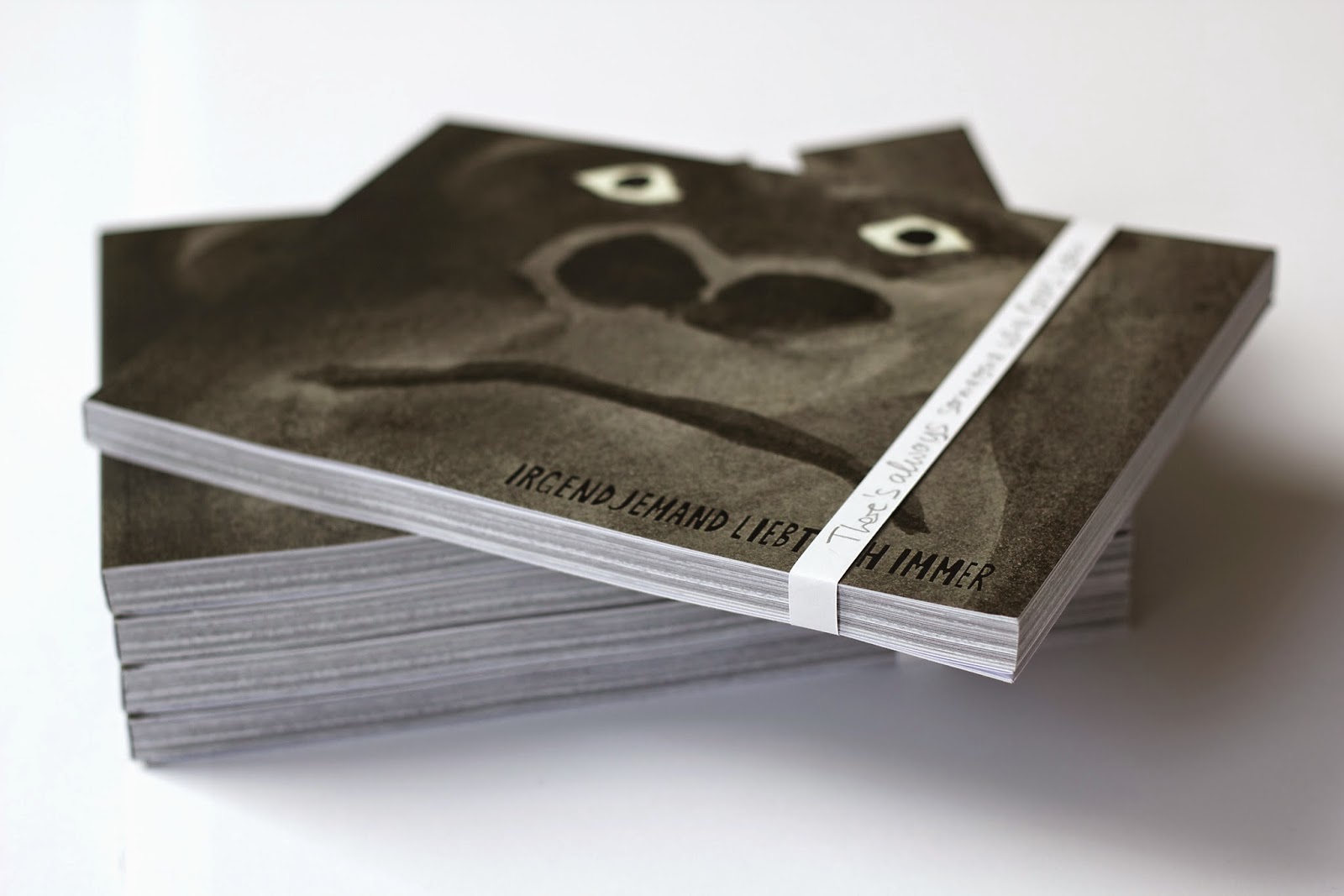 Earlier in 2014 I was honoured to be invited to give an opening speech at an exhibition in North Germany by two very splendid artists: Vera Brueggemann (N Germany) and Bruce LaMongo (Vienna, Austria). The exhibition - at Bielefeld's Artists Unlimited Gallery - was entitled Irgendjemand liebt dich immer (trans: There's Always Someone Who Loves You) and featured two rooms containing the individual works of either artist as well as one large room that exhibited the results of a collaborative project that the pair have been working on for the last two years. 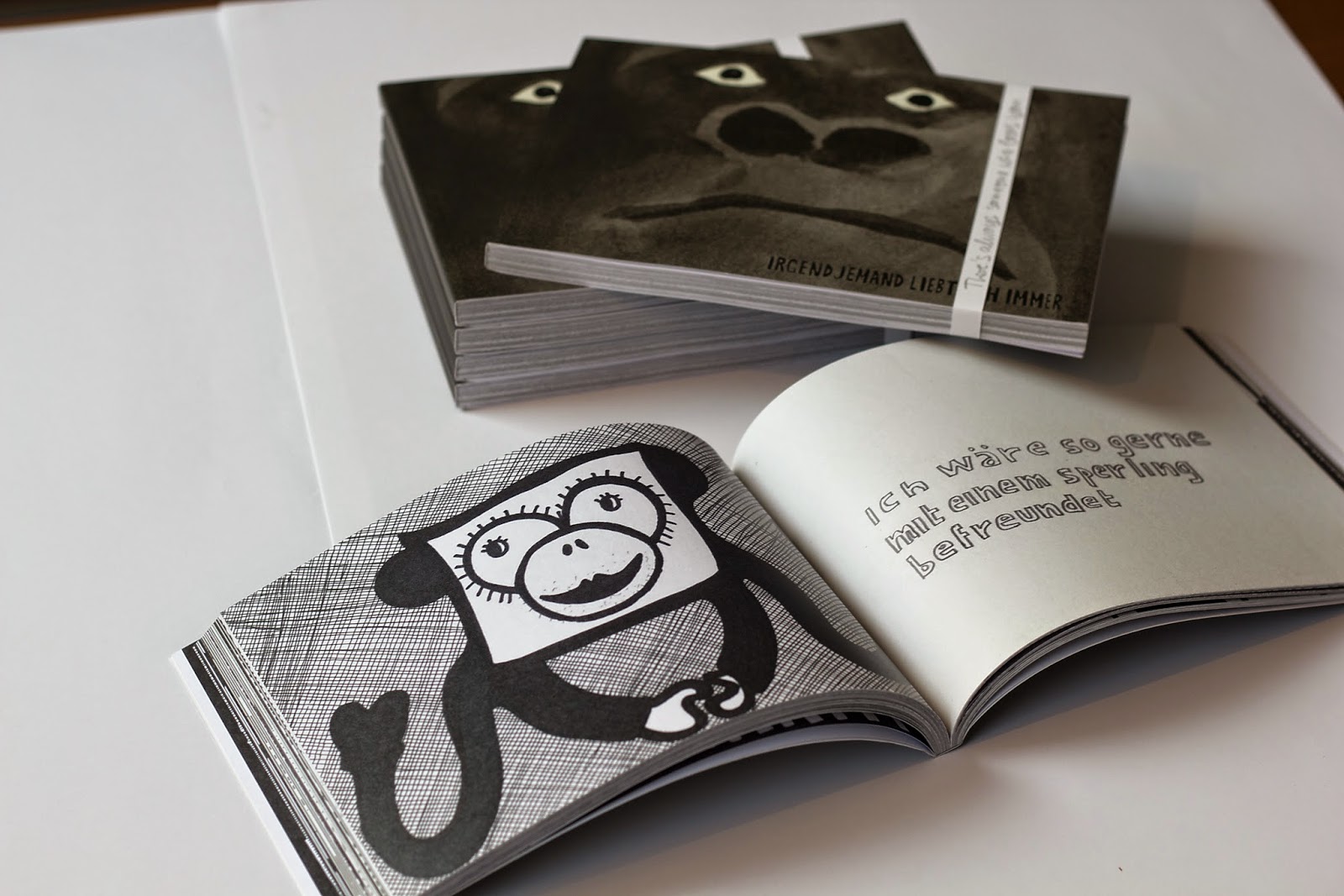 These last works consisted of texts sent to each other and then interpreted into graphic form according to each's own whims. The object was seemingly to enjoy not only each other's visions of phrases, cliches and popular sayings selected by the other, but to also revel in the misunderstanding and mis-communication that can result from the clash between two entirely separate cultures and intellects. The results were darkly humorous and wildly creative. Both artists dwell in the realm of the linear but their approaches are fabulously disparate, with LaMongo's perverse pop/trash culture references contrasting with Brueggemann's  more precise meditations on disappointment, desire and death. 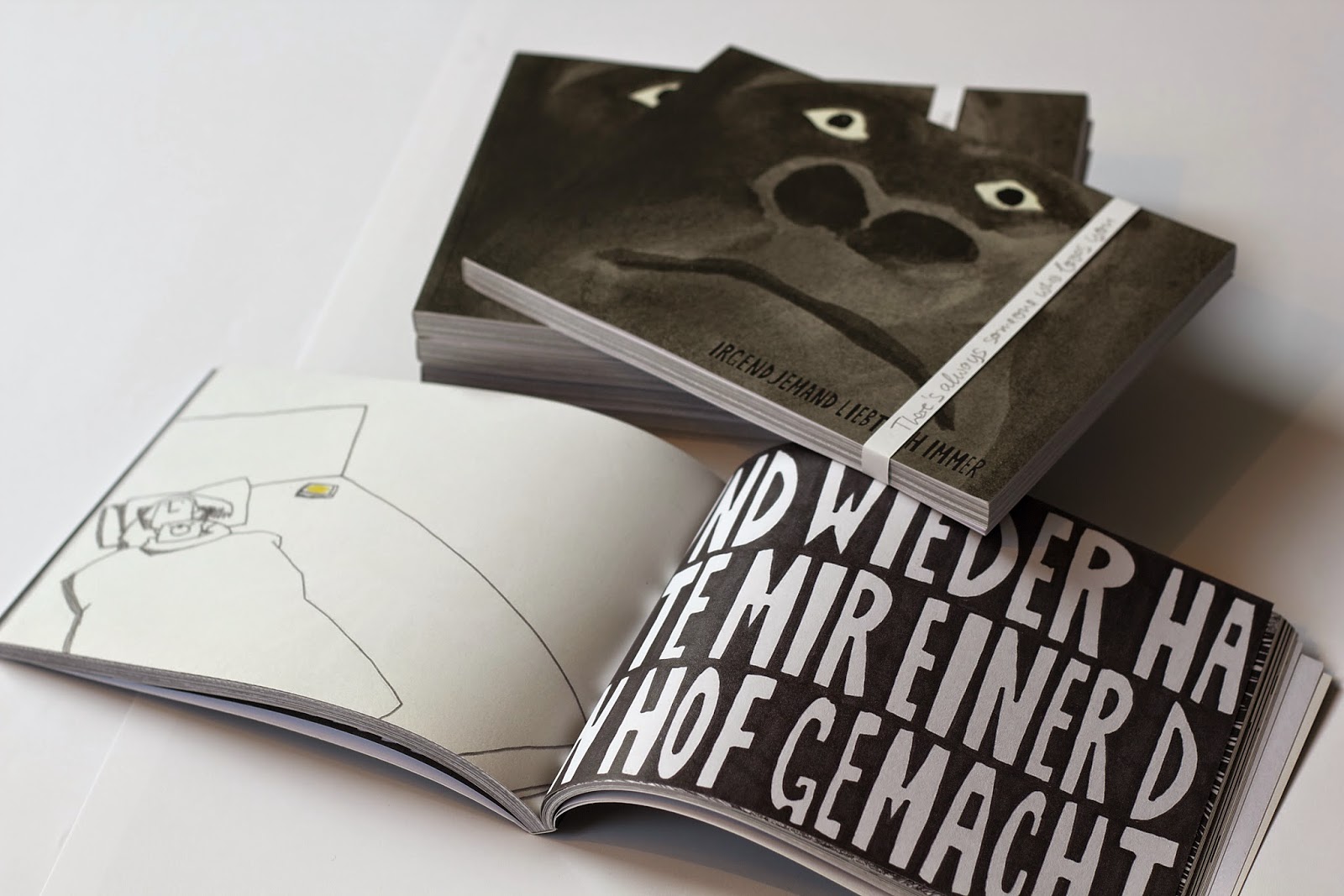 The final results of the duo taking their lines for a walk have now been collected in a single volume and I'm utterly proud to have been asked to write the commentary for the book (*below). My own text - in the true spirit of misunderstanding which drove the original concept - was written in English and translated (badly) via online translation engines. The book was beautifully designed by another Bielefeld artist, Jana Topel. The limited print run of Irgendjemand liebt dich immer is available to buy via the new Edition Guillotine website (which, incidentally, will be publishing more volumes by both these and other primarily German and Austrian artists in the coming year), for the ridiculously small price of €25 (plus p&p).

Get it while it's hot!

Like Chinese whispers, the pair’s dialogue - initially conducted long distance via the internet - is rife with misunderstanding and often (unintended) hilarious wrong-turns. Spurred on by the other’s phrases, they often seem to wilfully disregard any obvious interpretation. Instead we see the alchemy of misrepresentation and the occult science of nonsense, raised to the level of the profound.

Let’s face it: they got lucky.

This doesn’t mean to say that under their own steam these artists wouldn’t deliver the goods. Brueggemann casts a sly linear glance over the world: her wonderful drawings managing the balancing act of being both humorous and sinister. Sexual deviance; death and nature’s indifference all mingle in her worryingly artful pencil and ink work. Meanwhile, La Mongo stuffs his obsessively detailed work with layer upon layer of pop/trash culture references, making psychedelic vortices from the deepest recesses of his mind. It’s all brought to glorious life in felt-tips and forbidden imagery.

But, when put together, what do we get? A hilarious, weird juxtaposition of the precise with the messy; the childish with the ancient; the good, the bad and the ugly. Don’t say you weren’t warned…

At the planning stage this meeting of minds and temperaments would look disastrous, but, ironically, on paper it works perfectly. This book is the wreckage following the car crash between Westfalia and Vienna. An autopsy of how not to get along. La Mongo and Brueggemann: they may fight mediocrity, but they’re no longer speaking to each other…
Posted by Chris Jones at Sunday, January 04, 2015

A very interesting concept. I wonder how many other people could turn email/text communication into an art form...