The current re-acceptance/re-evaluation of the currency of progressive rock (or Prog) as a genre worthy of our renewed attention seems to have reached some kind of critical mass in the last couple of years. Magazines devoted to the subject; award ceremonies; endless deluxe reissues**; approval from indie bands who should know better; young bands with sixth form poetry names and Hipgnosis rip-off album covers; even Caribbean cruises, ferrchrissakes... I leave it to you to decide as to whether this is a good thing, but it cannot be denied that for anyone with more than a passing knowledge of the whitest popular music of the last fifty years there have been some fucking hilarious reminders of why, way back in its heyday, it came to be regarded as something of a joke.

One of the undeniable joys of life is watching This Is Spinal Tap, but I worry that a generation introduced to its pleasures these days may think that the antics of the Tap are some kind of extreme cartoon comedy version of the life of a band on the road in the '70s, and may not realise how close to reality the events depicted are. Rob Reiner's 'rockumentary' succeeded so well on its first release because just about everything that happens to the band is ridiculously close to the preposterous self-importance with which the music business took itself all those decades ago. This affectionate (and it is as affectionate as much as it is thorough) document is drawn from so many actual events that it's impossible to list them here, but as one example I draw your attention to this ELP documentary: The Manticore Special - a 1973 TV documentary which features several segments which Reiner et al HAD to have seen when preparing Spinal Tap. Carl Palmer's petulance regarding the quality of his hotel pillows is quite obviously the template for Nigel Tufnel's dressing room pre-show tantrum regarding the food on the rider. You're just waiting for him to say 'I've got this, and I don't want this'.

Anyway: this is digression. The reason I bring all this up is because I came across another splendid reminder of the high seriousness with which bands marketed themselves in the mid-'70s (just prior to the commercial reckoning/come-uppance that could only result from such hubris). 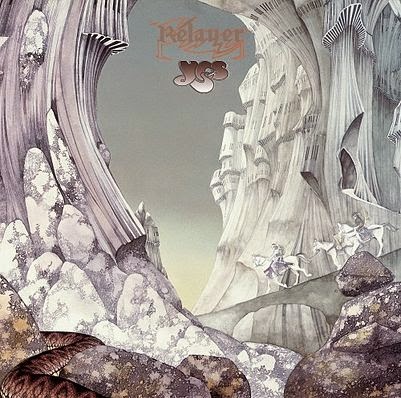 Another recent release in the seeming production line recontextualising of music from the era: Steven Wilson's remix of Yes' 1975 album, Relayer, is announced via the band's official website on a page that contains the tour programme that supported the promotion of the album. And it makes for superbly funny reading.

The tour programme begins with a reasonable biography of the band up until that point: from their beginnings as a post-psych bunch of ambitious chancers raised on Beatlesque consciousness-expansion and Simon and Garfunkel (a duo who seem to have been airbrushed from history with regards to their monumental influence on all popular music at the close of the '60s) to their then-zenith as stadium-stuffers.

It's at this point that the chuckles begin. A member-by-member bio consisting of a questionnaire-style series of answers to things such as 'musical influences', 'instruments played' etc. all seem fairly straight forward (and it's worth remembering that this was the standard format for most bands' tour programmes at the time - I have a very similar one somewhere in which Be Bop Deluxe answer very similar questions). But closer inspection reveals the level of contradiction and sheer nonsense that surrounded what was mainly a bunch of superannuated, self-taught 'musicians' (apart from Patrick Moraz: it seems that it was always the keyboards which demanded a more rigorous educational standard. No wonder they're always the snooty ones). 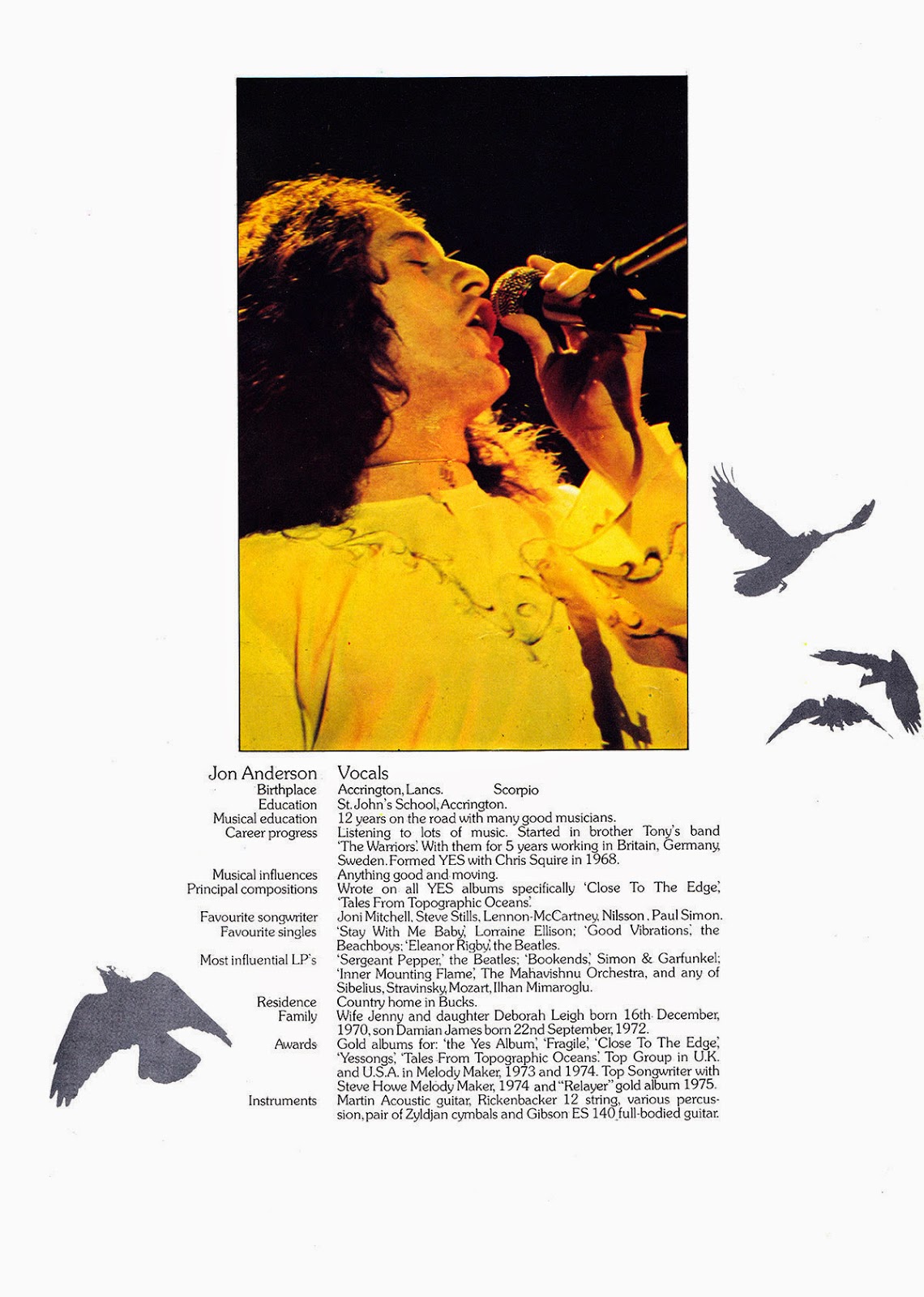 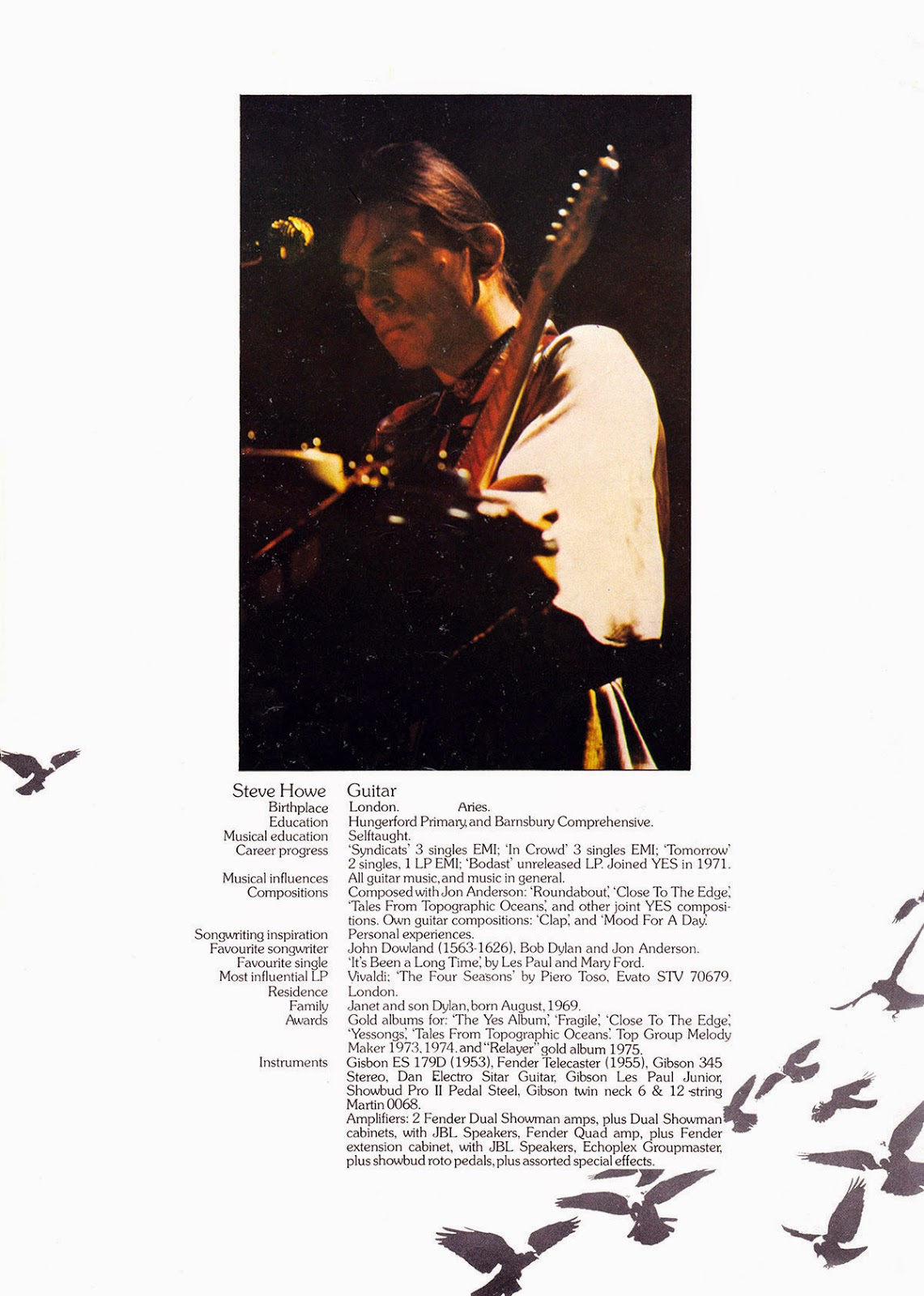 Starting with 'Maestro' Jon Anderson (as Bill Bruford once referred to him), we see a fairly unpretentious set of facts. A Scorpio from Accrington, this northern soul regards his influences as 'anything good and moving.' Fair enough, but then take a look at his 'Most influential LP's' (the apostrophe is theirs) - it's the usual bunch: Beatles; Simon and Garfunkel, Mahavishnu Orchestra (Relayer, of course, being the most jazz rock of all the band's albums) etc. until right at the end there's a nod to the obligatory classical stuff. To whit: '... and any of Sibelius, Stravinsky, Mozart, Ilhan Mimaroglu'

Woah... hold on there, Ilhan Mimaroglu?!?  Turkish avant garde electronica? Well, he was a house producer for Atlantic records at the time...

To continue; guitarist, Steve Howe, is also self-taught (and an Aries), his songwriting influences are 'personal experiences'. Deep stuff. But as I say, it's the details which draw you in. One of his favourite 'songwriters' is John Dowland (1563-1626) (note the need to include the DATES), after which he lists not only Verdi's Four Seasons as his favourite album, but notes the CATALOGUE NUMBER.

Chris Squire, appropriately for someone nicknamed 'The Fish' is a Pisces, and to be fair doesn't seem to be too up himself (which is possibly ironic as he's the most upper middle class of the lot). Meanwhile Gemini drummer, Alan White is doing ok until you find out that his 'Songwriting inspiration' is 'The World' and his 'Most influential LP' 'The big disc in the sky.' Good grief...

As if the astrological guff (which, of course, reappear in Spinal Tap in the form of David St Hubbins' girlfriend, Janine) and sense of self-importance conveyed here weren't enough, we then (after a run-down of the stage crew) get treated to an 'essay' by friend of the band, Donald Lemkuhl entitled (and I wish I was making this up): When life speaks, its voice is music. Listen. 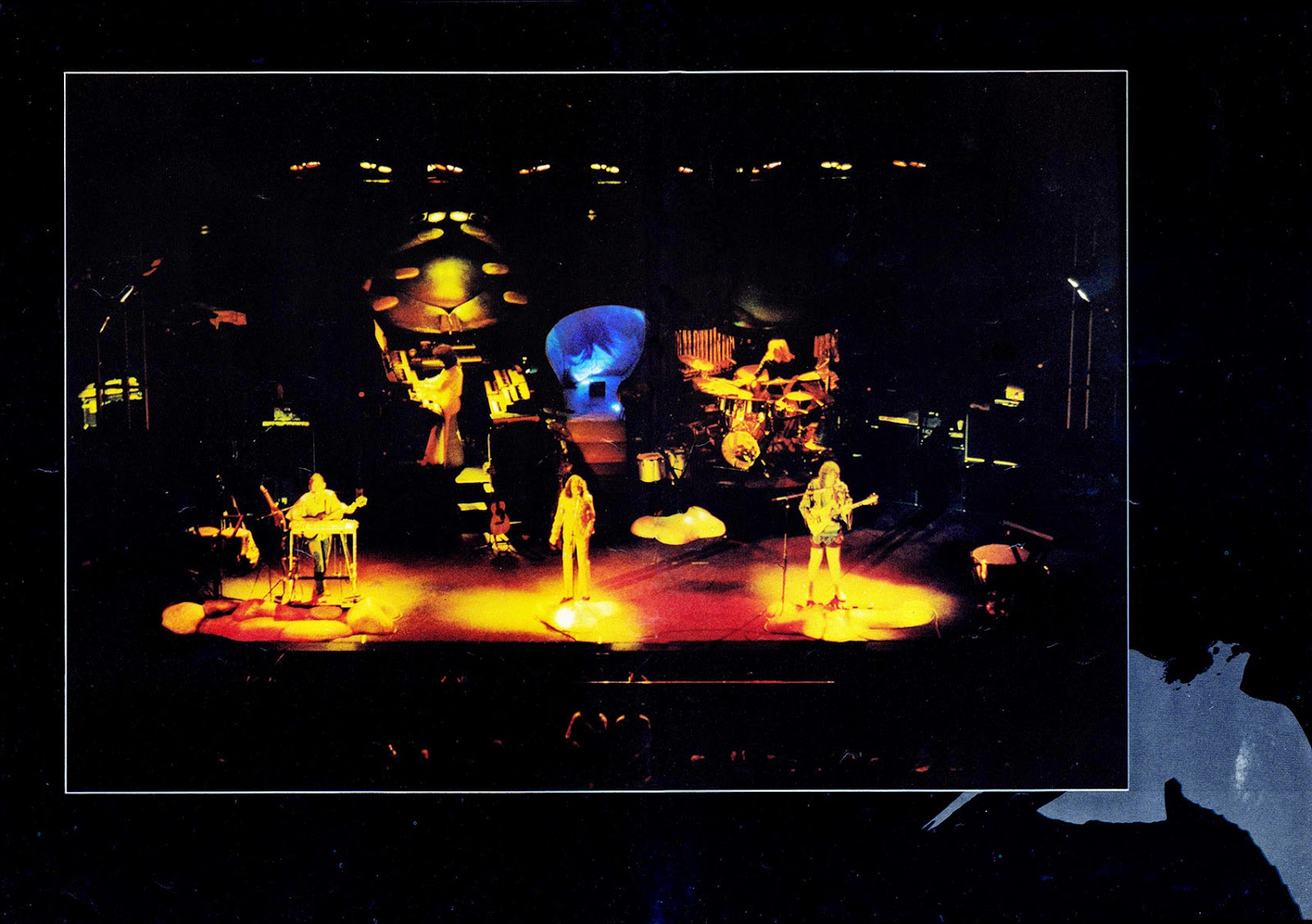 Lemkuhl was also a pal of the band's in-house designer at the time, Roger Dean (who along with his brother Martyn, designed the stage sets for this tour and which gets parodied, again in Spinal Tap, as the 'pods' in which bassist, Derek Smalls, gets trapped). He specialised in this kind of airy-fairy cosmic-speak, writing not only the the introduction to Dean's own first book, Views, but also 'composing' the poem which appeared on Relayer's cover as well as on the promotional advert. Another fine example of those far-off moments when ambition outstripped self-awareness.

Lemkuhl's prose in the tour program featured here features gems such as:

'It is the voice life in you. All music is your music. All music creates you and re-creates you. And you create music. Through music, you are creator and created in One.'


Later he concludes: 'You are more than human when you let the music become you. Listen. You are in tune with space. You become the music when the music plays.

So, listen. The air is full of music. You hear the music, now, for you are the music. And the music is you.'

Thanks, Donald. No really, thanks.

So, kids, your parents or elderly relatives may at some point insist that you watch Spinal Tap, and you may come away wondering why such a silly film is in any way important.

Remember: it's not a comedy, it's a LESSON. We can only avoid this kind of thing by learning our history.

*I'm a Virgo btw
**At some point I may get around to writing a serious piece on why I decry these endless 5.1/Blu-ray blah blah remixes. In short: I see no point in essentially reinventing (and radically re-imagining) their basic structure of works which, for their time, were noted as 'state of the art' productions - meaning that anyone discovering them for the first time now will hear something which really bears no relation to the original music as exoperienced by the audience back then. It seems a bit like reading a Dicken novel in 2014, re-written by J K Rowling.
Posted by Chris Jones at Sunday, October 05, 2014