Commemorating D-Day with a scientologist: Edge of Tomorrow (2014) 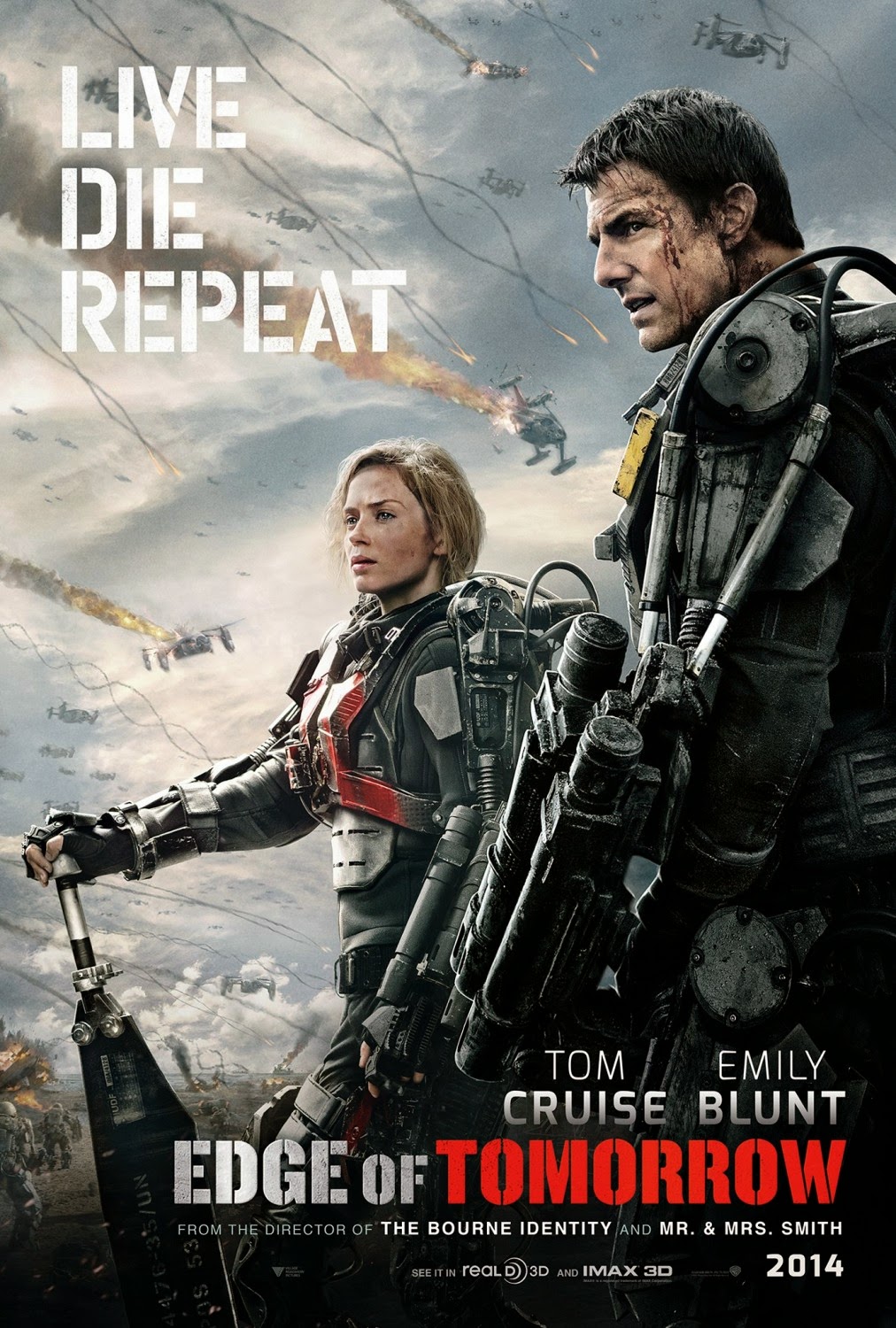 Edge of Tomorrow - this year's Tom Cruise sci-fi blockbuster - is, as most other reviews have made plain, a melange of many other films. But then, which blockbuster these days isn't? I seem to remember realising this when I saw Alex Garland's Sunshine. But remarkably it turns cliches to gold and never approaches dullness. For the literal-minded amongst you (and in similar fashion to Sight & Sound) I spotted the various component parts of Groundhog Day and Source Code (Tom, as Major Cage has to repeat the same day ad nauseum); The Matrix, Battleships, The Darkest Hour etc. etc. (squirmy CGI aliens); Aliens (post-'Nam troop fun with large exoskeletal battledress etc.); Mimic (well, the aliens are called mimics); Starship Troopers; Independence Day; Looper; Battle Los Angeles etc., as well as Saving Private Ryan.

Yes, you read the last one right - its release timed to perfection, with its central set piece battle, this is possibly the oddest commemoration of D-Day that you're likely to see all week. In this respect it functions well as a science fiction film, using scenario as metaphor, just as all genre work should.

Europe has fallen under the jackboot tentacle of an alien race borne to Earth via asteroid. Humanity looks out for the count, but a surprise victory (at Verdun of all places) led by tough resistance poster girl, Emily Blunt, has given the world hope again. Allied troops are massing in London (now officially the cool location city of choice for CGI blockbusters cf: Thor: The Dark World) ready for a invasion landing on, naturally, Normandy Beach where everything goes to hell. Our first experience in this battle is with the spearheading forces which include Tom. In this way the film functions as a re-telling of how the Yanks helped us kick Adolf's boys back in 1944. On paper that doesn't look too promising, but somehow no memories get sullied here and the aforementioned Frankenstein's Monster approach to putting together Edge of Tomorrow is saved by Doug Liman, a man who, with the Bourne series, showed us that the spy thriller could be retold for the post-modern age (and thus, subsequently laying the ground for the renaissance of James Bond). And if you think the script crackles, amuses and entertains more than usual it'll possibly be because two of the film's writers are none other than Jerusalem playwright, Jez Butterworth and his brother John-Henry.  This is no mere production-line pulp, even if it isn't (as the publicity claims) a really 'intelligent' sci-fi movie. But it sure ain't dumb…

As mentioned recently, we're now in a post-gaming environment where the game influences the film, rather than the other way around. Unlike Dredd and The Siege's simple level-by-level methodology, the concept of re-living the same battle over and over again is given life via the gaming cliche of being able to die repeatedly and being automatically put back at a fixed opening point until Tom and Emily can figure out how to kill, yes you guessed it… the big (blue) BOSS at the game's end (here referred to as the Omega). Emily Blunt's character is even nicknamed the 'Full Metal B*tch', in case we don't fully get the joke. And like Bill Murray's hapless weatherman in Groundhog Day, each rebirth offers scope for exploring the variations in formula as Tom meets Emily again and once more attempts to thwart the 'mimics'.  As if to demonstrate how well thought-through this concept is, at one point, I began to wonder why (a by-now pretty battle-hardened) Cruise had to work with Blunt, only to have Liman explore that very option for me. Talk about neat timing.

Virtuoso editing by James Herbert rushes you through Tom's many incarnations, often to comic effect as he wakes again and again to the (always wonderful) Bill Paxton as his Squadron Sergeant. The 12 certificate also in this case adds a certain dignity to the whole affair by never revealing too much gore, and leaving you to guess at how Cruise meets his grisly end at times. Paxton's just one of the joyful little touches that turn what could have been a boneheaded and deadly dull rehash of recent tropes into a genuinely entertaining film. There's also Brendan Gleeson (recently stunning in John Michael McDonough's Calvary) as the grumpy allies' general and Noah Taylor as Carter, the particle physicist who's the only one who understands exactly what is going on. Much has been made of the shaky opening premise that (for some reason) Cruise is sent to the front in some kind of revenge for his role as the US Army's PR man, depicting him for once as (initially) a craven coward - in other words, playing against type. Yet what he's really doing is putting us slap bang in the centre of the nightmare battle scenes, allowing us the imagine the sheer terror that any invading troops must feel. Beyond the A to B narrative arc, it's this aspect of the film that adds any real depth while never letting it get bogged down or over serious. For every war-weary failure there's a moment of genuine playfulness. Hell, there's even a caravan joke (which may have been insisted on by Cruise who has, himself, guested on the awful Top Gear). Goodness knows why certain reviewers found it dull… 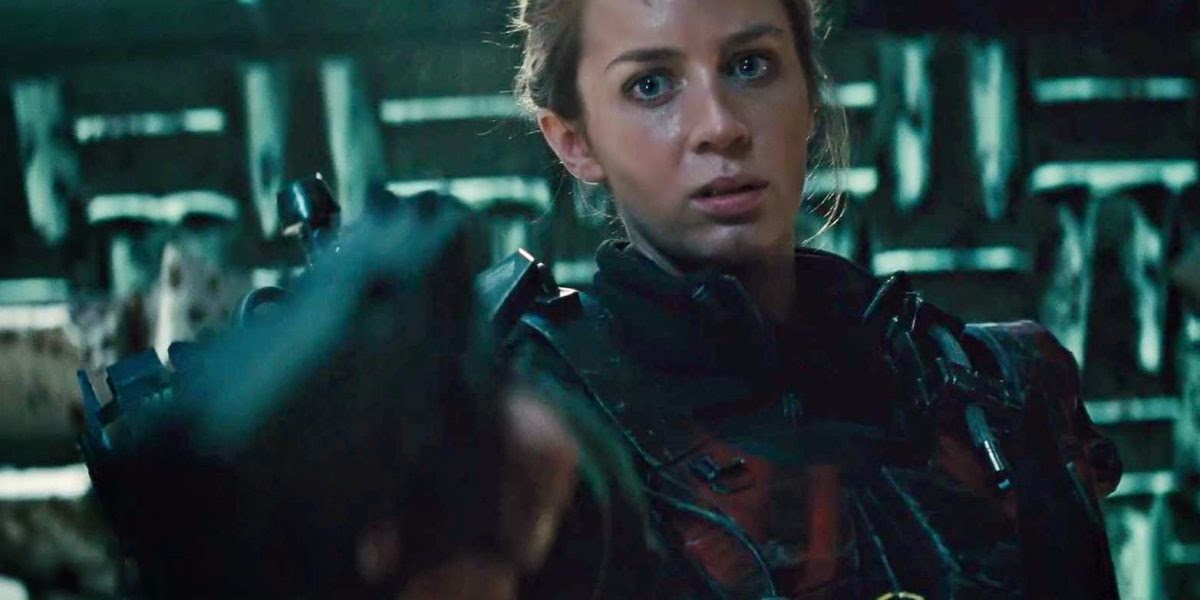 What's more, despite the film's central premise of reliving time again and again, the writers never attempt the kind of tricksy time travel plot twists that bedevilled crap like Looper, instead opting for a simple premise that allows us to enjoy the thrill ride as TC becomes gradually more and more like the pint-sized action hero that we all know and love. If there's a downside it's that the action sequences suffer from that 3D conversion process that leaves the whirling dervish machine aliens looking like hyperactive blurry octopi and battle scenes too chaotic a la Michael Bay. Yet the plot makes sure that these sequences are actually mercifully brief throughout, never sacrificing character or plot for sterile explosive scenarios. Be warned, there's nothing original about this film, and yet somehow this is one of the most charming (and it IS oddly charming) aspects. There are, after all, only seven stories in the world. Edge of Tomorrow remembers that it's how you tell these stories that draws in an audience.

But, in the end (without giving TOO much away) I'd say that the central premise of this film isn't really about re-imagining D-Day for a 21st century audience, or even about how one man can be transformed (in the 'crucible of battle' as his Sergeant jokes) into a true hero. No, Edge of Tomorrow  could be summed up as 'boy has goofy smile, boy loses goofy smile'. Yes, it's simply about one a-list screen actor's quest to rediscover his patent disarming, lopsided grin. Does he find it, folks?

Excellent review !
I'm kindly asking you to allow me to translate it and to post it into the non-profit online magazine "Fantastica" (www.fantastica.ro) of the Romanian Science Fiction&Fantasy Society.
You'll be credited as author, we'll mention your permission and insert a link towards the original review.
Thank you.