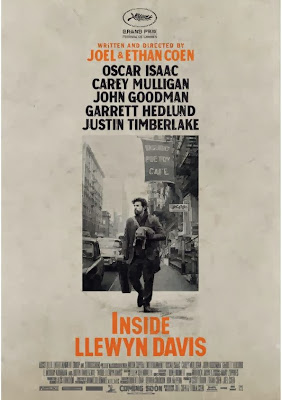 You don't really need me to tell you that the new Coen Brothers' movie, Inside LLewyn Davis, is great: the fact that it's already made many 'best of' lists before it even gets a general release tells you all you need to know. The brothers have been back on top form since 2007's No Country For Old Men (although I did find Burn After Reading a trifle to meandering and trivial for its own good). Yet again the pair have made a period piece that precisely captures a point in American history (in this case a week in the life of a homeless folk singer in Greenwich Village in 1961) and use it as the basis of another shaggy dog story that resounds with the profound nature of bad luck.

The film is a great one because it is at pains to reiterate the Coens' main gist, that life is wonderfully pointless in its injustices. In A Serious Man (which I think is their absolute masterpiece) life is pointless to a holy degree. In The Big Lebowski the life of the Dude is pointless both by design and by the activities of the artistic and the criminal. In No Country For Old Men the message was that the cruelty was unbearably pointless, if only for those who take it on themselves to be responsible for imposing order. But with Inside LLewyn Davis, the vagueries and coincidences that mean precisely nothing are viewed as unfairness that - because of the protagonist's generally pissy attitude - seems almost fair.

Sure, Llewyn, as we learn from scene one, has a talent that is god-given, but he seems to have little faith in himself and is hampered by the nagging doubt that he is lost without his former musical partner. He's grieving, but it's a mean sort of grief that leads him to rail at his long-suffering friends and heckle his peers. No matter that the latter may almost deserve his ire for their sappiness in peddling the type of 'folk' monstrosities that were lampooned in Christopher Guest's A Mighty Wind. We all wince when Stark Sands as soldier on leave, Troy Nelson, sings Tom Paxton's 'Last Thing On My Mind' or when Llewyn sits in on a session for a piece of jokey schlock called, of all things, 'Please Mister Kennedy', yet these people at least maintain a decent standard of humanity that Davis replaces with self pity. And while ultimately you doubt Carey Mulligan's motives behind her ire at Llewyn's freeloading unreliability, in this particular universe the bad luck is measured out in almost direct proportion to his bad decisions and bad mouthing.

The Coen's research in their source material here is peerless. Just as Bob Dylan spent much of his formative years in Greenwich dossing on couches, stealing records from richer middle class patrons, Llewyn relies on the hapless Gorfein's in their upper westside apartment to pick him up no matter how much he badmouths them; repaying them by stealing, or rather carelessly abducting their nameless ginger cat (possibly the true star of the film).

The cat as a metaphor changes identity and even sex but it's the touchstone of Llewyn's inability to really care enough about others. At various points it's lost, abandoned and even (spoiler alert) run over but always returns to haunt him. Just as the plot's circularity brings him back to the same song and same merciless beating from a faceless punter. Oscar Isaac's performance makes us empathise with Llewyn but never enough to feel too much pain when it all goes to shit. A key scene sees him simply shrug off a rejection from a stony faced Chicago promoter (played by F. Murray Abraham) despite having given a transcendent performance. It's the final straw, even if a subsequent decision to quit and rejoin the rat race is met with equal, hilarious failure.

Like the best of the Coen's work, the shaggy dog nature of the plot is always second to the tall tales conjured in the telling. John Goodman's smacked-up jazz has-been; Justin Timberlake's frankly revelatory bearded do-gooding folkie partner of Carey Mulligan, Mel: Llewyn's useless ageing jewish agent and even Llewyn's straight-laced disapproving older sister: these are all wonderfully amusing characters who will join the brother's canon of screen oddities and who make Inside LLewyn Davis another low-key masterpiece.
Posted by Chris Jones at Tuesday, December 17, 2013