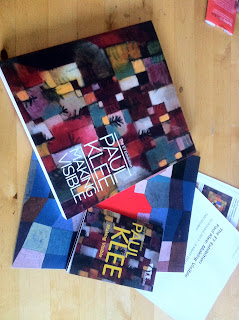 Starting this week at London’s Tate Modern, the EY exhibition of Paul Klee: Making Visible stays true to perhaps his most oft-quoted aphorism: that drawing is merely taking a line for a walk - for, like the best of Klee’s work, this new retrospective is linear in just about every aspect.

Taking a purely chronological approach, Making Visible starts with early work from 1912 and moves through his major phases with an almost prosaic adherence to his lifeline until we reach his premature death at the age of 60 in 1940. The curators have rightly assumed that Klee’s work itself does most of the talking as, despite snippets of historical context and numerous references to his teaching practices (which took up nearly as much of his career as his actually visual works), his is an art that seems to almost exist in its own private universe. Starting when he was already mature (at age 33) from the first paintings (Group of Houses; When God Considered the Creation of the Plants etc) here was a man who not only restlessly exploited his own natural methodical nature in search of new means of expression, but who also balanced it with (at least on paper and canvas) a god-given talent for expressing the spiritual via the infinitesimal. If his work contains any hints at stress and struggle (this is a man lived who through one world war, only to die at the onset of another more terrible one from a dreadful wasting disease) it is always tempered with a calmness and humour that overwhelms any real sense of transgression and immediate danger. It’s this meditative and childlike aura that always draws one in, leaving the emotional turmoil and grit of everyday existence to bubble up in its wake.

And therein lies the danger with Klee. So easy to like and so difficult to criticise, his oeuvre is - as the curators themselves state - a strange parallel cosmos of personal signifiers and transmuted modernist technique, always inspiring but never easy to fit into the warp and weft of the surrounding milieu. Maybe this is why the exhibition draws you back again and again to the equally important work he achieved at Gropius’ Bauhaus as a teacher. His writings (especially his most famous volume: The Pedagogical Sketchbook: 1924) display a mind which sought to balance the mystical and the experimental and which, from his earliest days as a member of Franz Marc and Kandinsky’s Blaue Reiter group, was obviously wonderfully open and non-judgemental, valuing the impulse of intuition just as much as sheer hard graft. 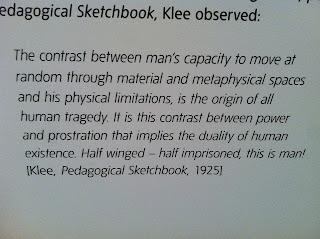 You can see it in his subtlest works.  His 1926 ink and watercolour works Sacred Islands or View of a Mountain Sanctuary combine an almost occidental Zen purity with a miniscule detailing and new techniques in background colour that only becomes clear after minutes of contemplation. This is the most quiet form of revolutionary art imaginable. 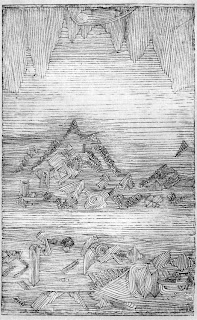 It doesn’t mean to say that Klee was above social commentary (as the exhibitors are often at too many pains to point out) such as his post-war work from c.1920, Memorial To The Kaiser or They’re Biting. Here his work displays the spidery caricature-like lines that seem to anticipate the fun of later satirists such as Ronald Searle and other ‘50s cartoonists and animators. But Klee’s humour is never overly cruel or blunt, always preferring a gentle lampooning.

Compared to many of his German contemporaries his semi-abstraction may lack shock value, but then that was never his aim, and besides: the mark of a true innovator is to see his or her work subsumed into future aesthetic language, making so much of Making Visible almost too familiar. If you’re going make sure you take your time, for it’s hard to see such genius with really fresh eyes. Especially when you consider that for many of us the ease with which Klee slips the radical into your view means that he’s one of those modernists who’s adopted as an early art hero by teenagers. I certainly loved Klee long before I ever fell for Ernst or Duchamp. 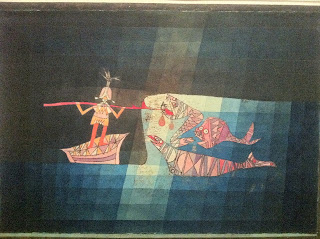 Making Visible is by no means a great retrospective. There’s no juvenilia, scant supporting literature, with only his earliest attempts at cataloguing his own work and preparatory notes for teaching included in the first room, and while – when you take into account how popular this will be - I can see why each room has so few works (a maximum of about ten per gallery, which isn’t a lot when you think how SMALL his stuff is), you still come away wanting more.

The famous satori of his trip to Tunis with Macke and Moilliet that opened his eyes to the use of colour is mentioned, but there seem to be few examples of the trip’s immediate effects and contemporary photographs are non-existence. All of which reinforces the myth of Klee as a man removed from time and creating in some platonic bubble.


Only in the last two rooms where events began to overwhelm him do we get a sense of frustration and bleakness, albeit represented by some paintings of witches which seem to draw on Jungian archetypes. By the last room equilibrium returns in the contrasting works which display, to the very end, a striving for new means of expression (the geometric linear style of Diagram of a Fight, 1939) as well as a sense of calm acceptance in the final Twilight Flowers (below) painted before his death in 1940 as he fruitlessly awaited citizenship from his Swiss homeland. It was granted six days after his death. I’m sure he would have accepted that ironic news with the same grace that he seemed to have lived his life. 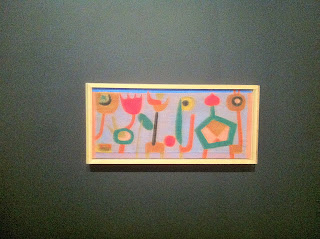