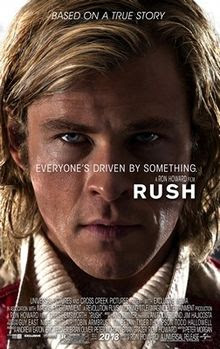 First, the amazing news: Chris Hemsworth can act! The fact that the Australian’s most notable performances have seen him either wading through both improbable dialogue (as Thor) and unbelievable accents and improbable dialogue (Snow White and the Huntsman) was probably doing a good job at hiding his hunky light under some pretty clunky bushels, but in Rush he’s perfectly cast as James Hunt, the playboy racing driver who was one of the last embodiments of  that dying breed: dashing young men who flirt with death. Coming from the team that gave you Frost/Nixon - director Ron Howard and writer Peter Morgan - this is a vastly entertaining romp through the career of Hunt and his famed rivalry with Austrian, Niki Lauda, which ultimately led to Lauda’s near-fatal crash in Germany in 1976.

In essence, it’s a politically incorrect Boy’s Own tale of derring-do on the world’s race tracks: loud, cliché-stuffed and playing fast and loose with the facts. But, despite the nagging sense that somewhere Jeremy Clarkson and his reactionary ilk would be soiling themselves in pleasure on seeing the movie, I found myself completely drawn in. The masterful editing; the wholly authentic ‘70s fashions, palette and soundtrack (Slade! Thin Lizzy!!) along with a script that crackles with hilarity, never allows itself to be taken too seriously and yet still has something mildly profound to say about the allure of young men who love to show off in close proximity to speeding metal and high octane fuel: all of these things add up to a film that almost manages to explain why on earth millions are spent on a bunch of boys toys (as Hunt’s first wife, Suzy, refers to them on their first encounter) going round in circles for hours. 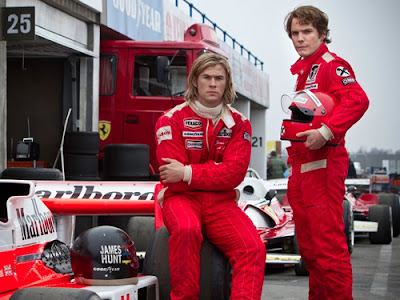 Let me state for the record: I have no love for Formula One, cars, or any kind of dangerous ‘manly’ motor sports. But as a child of the ‘60s it was impossible to ignore the coming of age of Formula One that the Hunt/Lauda rivalry represented, as well as the pop star allure that F1 drivers held in those pre-Nigel Mansell days. I remember my sister being fairly lovestruck by Emerson Fittipaldi (and his black and gold John Player Special), and Rush does an amazing job via the sound of screaming engines, some diabolically kinetic camerawork and a bevy of doe-eyed female supports in conveying something of what it was like to be alive in those more freewheeling days.

It’s no solid gold classic. However, I have an avowed weakness for larger than life biopics (hence my championing ad nauseum of Scorcese’s brilliant The Aviator) and let’s be honest here, this is a perfect example of the Hollywood biopic. By that I mean that facts are lost, twisted, mangled and outright forgotten in favour of a wholly romanticised duel of the upper middle class English eccentric with a love for a lifestyle every bit as fast as his cars, and the far more prosaic and meticulous Austrian for whom a ‘20% risk of death is acceptable. No more’. The characterisation of Lauda as a cold, friendless, driven (ha) man for whom the sport is all about performance and risk percentages verges on mild racism. But contextualised within the backdrop of the mid-‘70s , and also within a narrative that foregrounds a battle of head vs. heart you somehow forgive it. This is the true skill of Morgan and Howard. By the final battle under the shadow of a cloud-shrouded Mount Fuji I was biting my nails and feeling about as gung ho as a pasty middle class aesthete can get. 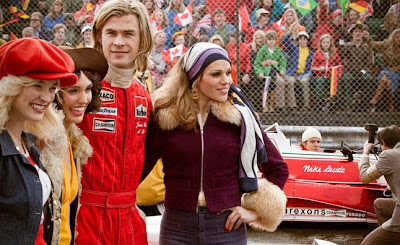 Ron ‘Ritchie Cunningham’ Howard, of course, has form in the art of not letting boring facts get in the way of a cracking ‘real life’ story: Apollo 13; Frost/Nixon (also with Morgan); A Beautiful Mind; The Da Vinci Code (ho ho) - yet he also knows how to craft human stories. Whisper it, but I’ve always had a soft spot for Parenthood.

No mention is made of the fact that Hunt and Lauda were friends (they shared a flat early in their careers) meaning that instead we’re told that a bitter tension between the two was the key reason for their explosive encounter in the 1976 World Championship, eventually (naturally) developing into grudging masculine respect for each other.

But the basic facts of the story do remain intact. Lauda’s astounding determination to re-enter - after only six weeks - the competition following his near-fatal crash which saw half of his head burned away is jaw-dropping. And Daniel Brühl’s portrayal of the wiry Austrian (despite his accent being slightly more Amsterdam than Vienna) is fearless. Yet best of all is Hemsworth’s uncanny portrayal of Hunt as a man who can’t see the point of any life not turned up to 11. And despite publicly stating that he found it troublesome to master, his accent is pitch perfect.


Up until this point I would have described Howard as possibly Hollywood’s most reliable mainstream director, consistently delivering huge box office hits while never really being mind-blowing (with the possible exception of Frost/Nixon), but the fact that he’s a well-known petrol head (urgh, I hate that term) seems to have unlocked a previously unseen passion in his film-making. Rush is by no means original, and as I say, contains more cinematic clichés than I’ve seen in a long time, and yet it still manages to be thrilling, funny and never, ever boring. I’m sure James Hunt would approve...

Rush is released in UK cinemas on September 13th
Posted by Chris Jones at Wednesday, September 04, 2013

Nice review, CJ. Like you, I'm in no way an F1 fan, but I'm looking forward to this enormously - a slice of our youth, as you say. And two of my favourite, er, art things of the last few year's is Asif Kapadia's Senna - through which I blubbed like a baby pretty much throughout - and the Andreas Gursky F1 pics: http://jalopnik.com/5461476/andreas-gurskys-formula-one-pattern-recognition

Ta monsieur!
And in a weird set of coincidences I was given a copy of Senna yesterday!
Really looking fwd to it, although not as much as 'Riddick', which I plan to see this weekend ;-)