Last night, watching the new Jacques Audiard film, Rust and Bone (or De rouille et d'os to give it its proper name - the distributors obviously thought that leaving it in the original French would put off audiences) I was struck by another example of how directors (or music researchers) seem to have developed a recent form of shorthand for 'I'm pushing the creative envelope here'. This is the use of music that is either incongruous or inappropriate for the scene happening in front of your eyes. 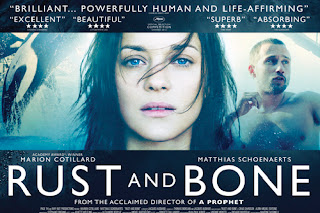 With Audiard the example was a scene where male lead, Matthias Schoenaerts, a bare knuckle fighter is doing his morning run while wearing an iPod. As he approached the camera we begin to hear what it is that he's listening to. Some pumping techno to pace his pavement pounding? Some soaring rock anthem to motivate him in his seemingly dead end existence at the lower end of Southern France's working classes? Nope. It's the tinny Martin Hannett-produced proto- electronica of… John Cooper Clarke's Chicken Town!  Gosh!! What's more it's the studio version that replaces all the 'fucking's with 'bloody's - which I always thought made this coruscating portrait of post-industrial urban blight too tame.

It's a bold move, obviously designed to signal several things at once: that the director (or music researcher - these guys are the unsung heroes of production - whoever chooses the background music in Come Dine With Me is a genius) is culturally cool enough to not only chose some suitably plaintive contemporary whinge-rock to go with the sensitive parts, but can also demonstrate a  vast knowledge of the last 50 years of popular music and is simultaneously brave enough to throw you a musical curveball.

(This is not to say that Rust and Bone is bad - in fact it's a beautifully honed slice of emotional drama, with a wonderfully nuanced performance by Marion Cotillard.) 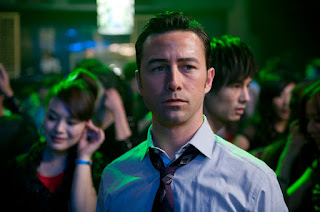 But the trend seems to be endemic: the execrable Looper (for the last time: WHY NOT JUST KILL THE VICTIMS BEFORE YOU SEND THEM BACK IN TIME, DOLTS?!?) featured an unintentionally gauche moment as Joseph Gordon-Levitt wooed his prostitute sort-of-girlfriend to the strains of... the folk rock, brass band classic: I Want To See The Bright Lights Tonight by Richard and Linda Thompson. That made me sit up alright.

Sometimes bravery tips over into pretension. This was one of those moments - although it was a welcome relief from the ditzy stoner logic which blighted the whole film.

Historical evidence seems to point to, who else? but the king of post-modern incongruity, Quentin Tarantino and his use of '70s MOR folk pop, Stuck In The Middle With You to accompany Michael Madsen slicing off a policeman's ear in Reservoir Dogs. 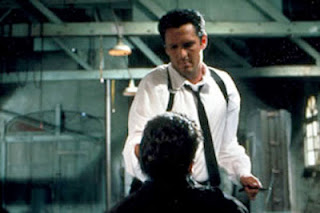 It was revolutionary 20 years ago. Surely we can do better now?

I'm not saying that all music should fit the narrative like a glove in terms of mood, historical accuracy or even with relevance to the plot, but the examples above are just lazy shorthand for a technique which, when used well can be stunning. Look at Martin Scorsese's use of hard rock in his gangster epics. You can bet that Sam 'Ace' Rothstein didn't listen to Cream or the Allmans - probably preferring Sinatra or Mel Torme - but the edge of drug-infused rock against early '70s violence works brilliantly. Likewise, Wes Anderson in The Life Aquatic... pulls a masterstroke with Seu Jorge's reinterpretations of Bowie and, more importantly, the incredible use of The Zombies' obscurity, The Way I Feel Inside in the film's most poignant moment. Colin Blunstone's almost a cappella voice breaking hearts is perfection.
This laziness results in truly awful moments such as one that can be seen this week in cinemas across the UK: fitting a slice of hairy old Ladbroke Grove space rock to a car advert. That's like seeing your Gran, coked-up and in lycra hotpants, pole dancing, or something. (There's also a Halfords ad which uses a jingle belled version of The Skids' Into the Valley in the background at the moment (really!) - but I think that's just a sign of an ad agency that have lost all contact with reality.)

Anyway it's not big or clever. Trust me, pretty soon you'll be laughing it up as Lars Von Trier sets a rape scene to Chas and Dave, or something.

I shall be reporting back with any more egregious examples heard. Feel free to send your own contributions here.

This post was written while listening to the inappropriate soundtrack of Jimmy Smith, Frank Zappa and Jackie O Motherfucker.
Posted by Chris Jones at Tuesday, October 30, 2012

Ohh the Zombie Movie is my Favrourite one included in New Trends.