On Some Faraway Beach 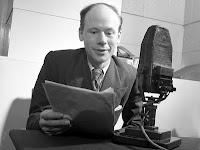 It must be my age, but I've recently become equally entranced and appalled by Desert Island Discs. Colour me 70 years behind the times!

The estimable franchise - set up by godlike Roy Plomley all those years ago (29 January 1942!) - now comes equipped for 21st century nerdy trawling and curation via the internet. The website has a fully searchable database wherein you can stack and slice the stats according to guest name, music chosen and even by luxury items chosen (have a look at how many guests chose drugs or fags). This can lead to literally MINUTES of late night fun and discussion when exploring the peculiar tastes and choices of guests.

I admit to being drawn to the site following Brian Moore's recent turn. Moore is (apparently) a rugby player. Means nothing to me about my life, but how my aged ears pricked up as he chose (somewhat apologetically) a Peter Gabriel-era Genesis track (In The Cage) - from their weightiest double concept album, The Lamb Lies Down On Broadway. Congnoscenti will know this as the tipping point point for the Charterhouse oiks, where hubris outweighed camaraderie, and the singer left them to their increasing search for chart success.

So when Mr Moore plumped for such a hoary old prog tune I thought some research was in order.

Let's look at the information from a very Jonesisdying perspective. How WAS the most reviled rock genre represented in the listings? How would 15 minute songs in 17/8 about the book of revelations fare on Roy's idyllic, conceptual isle? The answer was (predictably), not so well. Yet there were still some surprises…

Not one Yes track; one King Crimson track (Alice Cooper choosing 21st Century Schizoid Man); Genesis get 5 choices but only two of those are pre-Phil Collins as singer era (David Gower chooses I Know What I Like (In Your Wardrobe) - what is it with sportsmen and tricky time signatures?), Jethro Tull get one (Jenny Agutter chose Bouree?!?); no ELP and there's predictably no Van Der Graaf Generator. Mind you (and this is amazing) there IS a Gentle Giant track in there: but it's unsurprisingly chosen by snooker-playing Magma fanboy Steve 'Interesting' Davies. In fact Steve's entire show is just plain weird. He goes for a Christian Vander solo track instead of one by Magma, AND he chooses TWO George Duke tracks. I bet Sue Lawley loved all that…

By extension, Peter Gabriel, the man who sparked off this futile nonsense, gets eight listings, mainly for his political 'masterpiece', Biko or sappy unemployment duet with Kate Bush, Don't Give Up, although uber bloke, Jeremy Clarkson, does go for Solsbury Hill (which, as you all know, chronicles his departure from Genesis). John Cale, in true miserabilist form takes the apocalyptic Here Come The Flood. Oh, and avuncular old Terry Wogan chooses That'll Do - from the soundtrack of Babe 2: Pig In The City. Well, the allegorical tale of a small pig, lost in an urban jungle doesn't sound a million miles from a prog rock concept, does it?

Proto-prog and art rock is, definitely better served. Ladies seem to love the Moody Blues, with both songstress Clodagh Rogers and football-loving chef Delia Smith going for the Brum-based mellotron-botherers. But only irksome Chris Tarrant chooses the predictable Nights In White Satin. Respect to the girls! Procol Harum get on the list five times (including Oswald Moseley's wife), but only 'crossword compiler' John Graham dares to choose something other than you-know-what. And it's Homburg, not something off Exotic Birds and Fruit. Pah…

With our legacy acts reaching (or outstripping) retirement age, these days it's not surprising that both the bassist and guitarist from Pink Floyd have been on the show by now. But as for the other guests choosing their work? It's all mainly DSOTM, Wish You Were Here or (urgh) Wall tracks in the 25 listed. Only Desmond Morris and explorer Christina Dodwell break ranks, with Morris taking Syd Barrett's masterful Interstellar Overdrive and Dodwell the eery One Of These Days. Meanwhile flautist James Galway gets bonus points for settling for the whole first side of Atom Heart Mother. Logic tells me that this is because he possibly played on it. I can't think of any other reason that anyone would choose that.

The Velvets? Six time choosees: one of those by the aforementioned Cale. Roxy Music? Eight choices with only George Michael choosing Eno-era stuff (Do The Strand), and Brian Eno (who guested himself in 2008) amazingly has only been chosen once (by Superman actor, Christopher Reeve).

Anyone hoping for a blast of Canterbury scene jazz prog will be sorely disappointed. With no Caravan, Soft Machine or even Henry Cow to leaven the stodge, it's left to Lenny Henry to choose Robert Wyatt's Shipbuilding. I'm not a fan of Henry, but his choices do seem to indicate that he knows and cares for music. Only his choice of Bob Marley seems dull alongside Bootsy, Funkadelic, Prince and Ry Cooder.

And going further - no, there's no krautrock, and let's not even touch on either experimental music or jazz, suffice it to say that there are far more Miles tracks picked than, say, Ornette Coleman.

But this is the point: any amount of slicing can be merely made to serve the researcher's own prejudices. Of course there's little of the stuff that moves ME, and of course the choices will seem predictable ie: everyone who chose Massive Attack only went for Unfinished Sympathy. In my geeky excitement I'd lost the point, that music was chosen not just for being GREAT but having significance for the individual. And most individuals have other, more important stuff to be doing with their lives.

In the past the show was primarily filled with classical choices. Go back into the archives before about 1973 and, naturally, the tracks and the castaways all seem to be far too worthy and staid. The establishment did not condone rock 'n' roll and pre-80s almost NO popular musician was a castaway, unless they had gained recognition via the honours list or hung out with aristocracy (which must be why Georgie Fame, of all people, appeared on the show in 1973). This still seems to be the case, hence Phil Collins, Bob Geldof, Paul McCartney… although I'm perplexed as to why, from the Stones, only Charlie Watts has been a guest. Maybe because they knew he'd pick tasteful jazz.

But as I grow older the guests grow more contemporaneous and their choices reflect my own demographic (well, up to a point): and thus I turn into my parents…

But it was (and will remain) a fun game to play, and for this I thank Radio 4. Try it yourself.
Posted by Chris Jones at Thursday, March 08, 2012