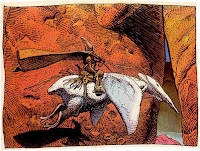 A few hastily penned words to express my feelings at the passing of another of my real heroes, Jean Giraud aka Moebius: the french graphic novelist and artist who, along with Philippe Drulliet and Pierre Dionnet founded Metal Hurlant, the magazine that single-handedly revolutionised the way that I looked at 'comics'.

I came to Giraud's work in the late seventies much like many others of my generation, via the American offshoot of Metal Hurlant - Heavy Metal. In amongst the more lurid and juvenile work of the US artists, the work of Moebius and Druillet (along with other European giants such as Enki Bilal) seemed like renaissance masterpieces. Only in time did I realise how right that impression was. For absorbing a far more radical and rarified diet of art cinema, leftist politics and countercultural science fiction, their typically Gallic mix that saw no distinction between this and the work of Jack Kirby or the westerns of John Ford, resulted in a giant evolutionary step in what the French call BD: bandes dessinées. Suddenly narrative wasn't the key, and taking a cue from the American underground heroes that founded Zap! comix, the journey became as important as the outcome. 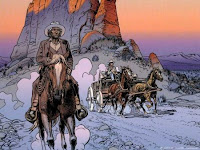 Giraud himself had learned his chops as Gir, the author (with writer, Jean-Michel Charlier) of the Blueberry western comics. And he took that vision of Ford's Monument Valley landscape and transmuted it into the alien vernacular that we take for granted these days. Only yesterday I saw John Carter, a film which pays tribute to Giraud in many of its cityscapes and deserts.

It wasn't just the frank portrayal of adult themes, but the exquisite line work and hallucinatory worlds that effortlessly sprang from his pen that turned a teenage boy's head to mush. His work made a brilliant companion to the soundtrack of my youth. Poring over his epic Garage Hermetique or the dialogue-free Arzach whilst listening to Eno or Krautrock; it seemed like these worlds were made for each other. I was more than hooked, I idolised his ability to allow the escape and the dreams to pour forth. I even wrote my third year dissertation on Moebius, Druillet and Bilal - my triumvirate of graphic novel excellence. 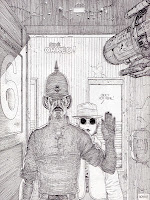 His work on film is probably better known - the production design work which included Ridley Scott's Alien, Tron, The Fifth Element, Willow and so many more had begun years before with his inclusion (along with H R Giger, another of Alien's key players) on Jodorowsky's aborted Dune project. His Incal series completed with Jodorowsky was his later, crowning achievement.

In many ways Giraud spoiled my enjoyment of comics for ever. No one really ever came close to equalling his work in my eyes. The detailed linework, the fabulous way he rendered the human form in strange circumstances, the ability to imagine whole civilisations complete with an architectural language fully-formed to boot: all of this and so much more are his legacy to me.

Also Willow? That's new to me. Thanks alot for this nice review (sorry doe my bad english).