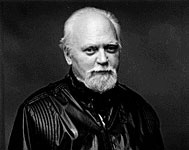 A new year (and a lengthy blog hiatus - sorry Jones fans) broken with sad tidings. Not only has Alice Coltrane shuffled off, but one of my original heroes - Robert Anton Wilson.
It was originally his Illuminatus! Trilogy which fried my imagination as a young whippersnapper. Whereas most of my peers were getting 'turned on' by the usual suspects such as 'Zen and the Art...', 'On The Road' and Carlos bloody Casteneda - I fell for RAW's healthy, playful, questioning agnosticism and love of connectivity in the universe. Probably the modern father of conspiracy theorists, he was a prankster of the highest order and introduced me to more esoteric lore and leftfield theorists than was healthy for a young man ;-)
Hail Eris, and goodbye Bob. The next 23 spliffs are for you...
Posted by Chris Jones at Wednesday, January 17, 2007