Got that? I'M GIVING STUFF AWAY HERE! Ok, for all you Sky-watching freaks, stop now.
However, it's my sworn duty to report on what appears to be a severe crisis at Lusht production central. Now into its two-month 'hiatus' (ie: christ, let's really go back to the drawing board before we get cancelled, guys) until February. The first 6 episodes of series 3 of the national tourist board of Hawaii's premier TV show (Check the utterly Lushtous pic below) is floundering badly. The trouble is, I still enjoy it. 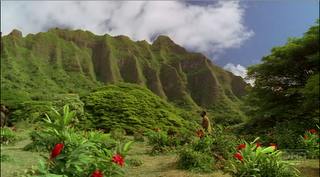 The initial trick (as mentioned earlier) of making Jack quite a sympathetic character has been dulled by the endless dragging out of the whole Henry gale/Ben plotline about his bloody spinal tumour. Maybe it's the fact that the 'Others' are turning out to be as unpleasant, bitchy and disorganised as those island inhabitants who stupidly flew Oceanic, but the 'mysteries' behind everything seem to be mere placeholders to keep an increasingly flimsy series of illogical events in place. Not even the reappearance of the 'monster' in the latest episode could bring back the old magic. And why take a character like Eko to whole new bad-ass levels (the murderation in Yemi's church was ace), only to squish him against a tree? Eko's opposite number, John Locke, is looking increasingly less like the keeper of deeper knowledge and more like a middle-aged fuck up floundering through portents and visions (but at least we now know that he knows how to grow weed, hehe).
There HAVE been some great little moments. Ben/Henry telling Kate how unpleasant the next two weeks were going to be; Desmond's strange psychic/future vison stuff, and who is the man with the eyepatch???
But boy, the whole Others stuff at the Hydra station is really beginning to feel like the producers have NO idea to go until they get their big screeen version in the pipeline. At first it seemed that the mind games were all very cool, but now it just seeems as though we're gonna have to go with Kate, Sawyer and Jack's 'Escape from Stalag Lost' and just put up with EVERYBODY'S inability to answer a question in a straightforward manner. Meanwhile the beach dwellers continue to flail pointlessly until someone decides to give Desmond a bigger role, stop Sayid being so fucking serious (ok, I know he's been through a lot) , throw Charlie in a hole and give us more about the Hanso stuff. Hey ABC, I'm still here, but it's looking more and more likely that, like Twin Peaks, a cutting-edge piece of psycho-drama is turning into a bloody expensive soap.
Posted by Chris Jones at Sunday, November 12, 2006