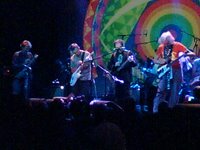 A belated report of last weeknd's rather spiffing Gong Family UnConvention which was held over three days at Amterdam's Melkweg. The venue, it transpires, was where Daevid Allen first had one of his seed visions of the 'electric temple', whatever that means ;-). But seriously, it was an utterly splendid event, immensely well organised and filed with surprisingly great performances.
While my love of the Pothead Pixies goes all the way back to my schooldays in the early 70s I'm not such an uber fan as to forgive the somewhat suspect ramblings of all of the 'family's' many branches and offshoots (viz: kangaroo Moon, hem hem). Thus it was a cherry-picked smorgasbord, interpsersed with some great food, gallery visits and general digging of the civilized vibe prevalent in such a wonderful place. Canaltastic.
Friday's treat involved the Gliss Orchestra (see pic), featuring both Allen, Harry Williamson, various Acid Mothers, Steffie Sharpstrings of Here and Now and, best of all, Steve Hillage - who gave his all over the three days. Here and Now were a rather mixed bag, though Keith The Missile seems to have matured into the Mani of the Hippie set. Saturday's highlight was the four-to-the-floor techno of System 7. A guilty pleasure fer sure, as their brand of dance music is somewhat dated these days but Hillage and Giraudy make one hell of a groovy racket for a pair of 50 somethings and Steve's soloing was somewhere gorgeous between Manuel Gottsching and the Orb.
Sunday's climax was the double-header of Hillage's band (with Mike Howlett on bass), recreating most of Fish Rising followed seamlessly by Gong themselves with as near to the original 'classsic' line-up as was posssible, despite Pip Pyle and Pierre Moerlen having shuffled off over the last year. While many may see the Anglo French jazz rock jesters as a whimsical footnote in musical history, I was, and still am, inspired buy their irreverence, playfulness and benign wisdom combined with frankly fearsome playing. Allen's glissando technique is peerless, while Didier Malherbe's Coltranesque soprano still adds just the right dash of cosmic jazz (proof here, folks). He doesn't appear to have aged a day either. Ditto Hillage who, I confess, is still an idol for me. (I heartily reccommend the forthcoming re-releases on Virgin). The finest moment came about ten minutes into his preceding set when someone shouted in unbelieving wonder: "Steve Fucking Hillage!". I knew exactly what he meant. After 30 years it was simply incredible to see this man still being as deft, articulate and unashamedly FAR OUT. When I was in my early 20s I used to DREAM about seeeing him live again, especially with Allen and co. Observers have told me I had the biggest sh*t-eating grin all night. They played for hours and as we finally staggered into the Netherlandish night there was a genuine feeeling of having been part of something at once intimate and special. One for the 'best gigs ever' list...
Posted by Chris Jones at Sunday, November 12, 2006

i think you mis-spelt 'spiffing'.

And I wish you'd been there too matey. You woulda loved it. It suddenly occurred to me halfway through the weekend that probably loads of my old mates were there, probably disguised as fat old hippies. Weird...

U was there too and took some pics. Am looking for other guys to share pics with. Meet me at my blog
http://piper-at-the-gates-of-dawn.blogspot.com/

I was that guy who shouted "Steve fucking Hillage Man" What a great event.