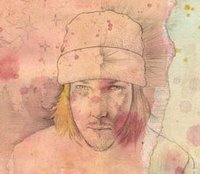 Many people would disagree, but I'm gonna go out on a limb here and say it: David Sylvian has finally arrived!
What fresh madness is this? you ask...Well, having now lived with Blemish (and its remix sibling The Good Son vs The Only Daughter) and Snow Borne Sorrow (by his Nine Horses project) for a long while now I'm finally having to 'fess up to just ADORING his stuff these days. In the past I was never able to get past his faux-Ferryisms, his pretentious literary references and the sheer ARCHNESS of his earlier work. He chose all the best people to make records with (Danny Thompson, Holger Czukay, Robert Fripp, Nils Petter Molvaer, Bill Nelson, Jon Hassell - heroes, every man jack of 'em), but it always seemed a little TOO controlled and premeditated.
But Blemish was different.
It relied only on DS, a little Fennesz and a little Derek Bailey (gawd rest his soul etc). His voice, wracked by the emotional honesty of what he was relating (his marriage's disintegration) was suddenly a mature thing, filled not with second hand philosophy, but with first hand grief. It the first Sylvian album I unconditionally loved. Not only that - it was sparse enough to be remixed, but resilient enough to retain its identity (and in some cases gain considerable resonance - I point you at Sweet Billy Pilgrim's remix of "The Heart Knows Better" - it's almost heartbreaking). It is in fact one of the ONLY remix albums that manages to improve stuff (cf: Beck's latest offering - pooey!).
The Nine Horses album slips into rockism in places, but now the contributions by Arve Henriksen, Stina Nordenstam etc. seem integral, not 'cool', and his lyrics are starting to have political bite and are even (whisper it) quite humorous! After 20 years of wanting to like him, I finally can.
Now he'll probably reform Japan and spoil it all...
Posted by Chris Jones at Tuesday, March 07, 2006