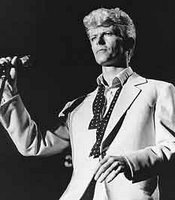 There is nothing like a Dame! A weekend of self-enforced nothing has meant that mine eyes have merely glanced tube/screenwards. However, Friday night was graced with a run-through of the forthcoming DVD release of David Bowie's 1983 Serious Moonlight tour. Stop...come back! Ok, the man was a walking mass of contradictions at this point. For the first time in his entire career he was sporting a truly awful look - blonde barnet and Miamai Vice chic baggy suit etc. In public he was coming over all reformed and cleaned-up, whilst, as Carlos Alomar and others testify in David Buckley's excellent book, Strange Fascination, he wasn't as squeaky clean as he made out. What's more, the tour - which finally put Bowie in the 'untouchable' earnings bracket - was widely seen as a cash cow (as someone points out in the book, there's usually a heavy divorce settlement or allimony to pay behind such gargantuan tours, though it was probably Mr Jones' ginormous gak bill that he was still paying off in this case).
Indeed the costumes/dance routines of the backing singers are eye-poppingly naff, and the band, bumped up by the Borneo horns are far too slick. Station To Station veteran, Earl Slick showboats like nobody's business (replacing Stevie Ray Vaughn, who apparently was thrown out of rehearsals for having an overly pushy David St Hubbins-style girlfriend!) and Alomar does his Nehru impersonation...BUT (as Peewee Herman sez, everyone has a big BUT)...this Vancouver concert still rocks with the undeniable power of the thin white dook's muse.
What really struck me is the fact that all this great material was squeezed from just over ten years of mayhem. Indeed, almost a lifetime's worth. And how many stadium-filling acts would you see singing the lines: "Here are we, one magical moment, such is the stuff
From where dreams are woven
Bending sound, dredging the ocean, lost in my circle
Here am i, flashing no colour
Tall in this room overlooking the ocean
Here are we, one magical movement from kether to malkuth
There are you, drive like a demon from station to station"?
I mean, come on, U2, 5 years later, got as far as Martin Luther King - this man is talking about Eliphas Levi, the Kabbalistic Tree Of Life (DON'T mention Madge) and cocaine neurosis in front of 30,000 people. Kinda makes Coldplay look a litle weak...
Textually, the DVD is flawed by the cutting of numbers from the setlist such as ''Stay'' (Slick's finest moment) and ''TVC15'', 80s editing techniques, and why does the Dame mime on ''Ashes To Ashes''? But it's still thrilling.
Posted by Chris Jones at Monday, February 13, 2006