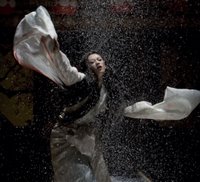 Well, quite pretty in places, but Memoirs Of A Geisha is essentially a casebook study on why Hollywood can't do Japan. The cast were lovely but the material was flimsy. Dialogue that sounded clumsy - delivered in heavy accents, as if it were aimed at morons who don't mind almost watching it in Japanese but couldn't be bothered to read subtitles- and a plotline suited more for a beach read than great cinema. Don't expect to see it and cry.
Beauty is measured in purely western terms. The female cast represents a good chunk of the royalty of eastern film right now but make no mistake, this is not international movie-making. It's half perfume advert and half convincingly claustrophobic portrayal of a pre war, post feudal world of ritual and repression. And it looks like it was made by computers. I found myself wondering at the little cgi'd haloes of light around every match lit. Gorgeous, but entirely mannered and essentially pointless.
Even more amazing is the inclusion of a 'we have to get the kid ready in six months' montage which, of course, is a classic lowly protaganist against the world staple since Rocky ran up and down those steps. But in a GEISHA movie?
Posted by Chris Jones at Saturday, January 28, 2006