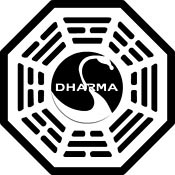 Oh dear God...I've still got issues with this series, but now I'm virtually up to speed with series 2 of Lush (see below) and after a wee bit of investigation have discovered the true extent of this phenomenon. As my v good friend the VCDH sez of the wealth of 'supporting' material out there: "It's metamedia not multimedia". The point being; that this raises the bar for any future cult, watercooler-type TV series. Way high...
The evidence is frightening, and makes the programme itself begin to look more like the X Files (probably the show's most immediate predecessor). For starters we have the official network site; then we have the 'fake' sites for the airline and the Hanso Foundation stuffed with clues. There's even a subscribable Dharma Initiative site which, presumably allows you to somehow partake in the plot development. This is the key to the programme. The wily producers take their cues from the fans (apparently the long break in series 2 over Xmas was merely to write and film the next parts - yes, they really are making it up as they go along!) and boy, do they love to burble on...
The show itself has the Fuselage community site where fans discuss every aspect of the episodes, from what the smokey monster is, to those damn NUMBERS...
And talking of Hurley's arch nemesis; there's stuff like THIS , where you can really get into the nitty gritty. This, of course is merely the tip of the syndicated iceberg. Combine this with greedy, impatient bit torrent monkeyism and you've got a show that virtually becomes a self-sufficient mini-eco system with producers feeding off fans who feed off...etc.
Finally to take a step back and get a proper perspective again, VCDH alerted me to THIS. For half-cynics like moi, it caters to my underlying fear that yes, it's just a big, expensive soap opera...with polar bears.
(mind you, have you noticed that Jack and Locke are almost completely mirrored by Ana Lucia and Mr Eko? Y'know, in a kinda black/white yin/yang way? Far out...;-))
Posted by Chris Jones at Tuesday, January 31, 2006

Hello, it's the DMFRDH (Dim-witted, flu-ridden Dan Hill) here ... Oh yes indeedy. Steven Johnson, who has basically written a book on this process of developing layered, interwoven media which engages/spurs fans to create further media ('Everything Bad Is Good For You'), wrote about Lost in the Times a while back. It's clearly a proof-of-concept moment for him, and looking at Television Without Pity, I reckon he's right! TWP is fantastically interesting too, as semi-professional fanboy TV 'parasite' (in best sense), now owned by Yahoo! and therefore very much professional media organ, as Yahoo switches sights to TV. TWP is smart as it still manages to retain its cred/humour (check any recaps by the genius Erin) so somehow sits like a kind of buffer zone between the unruly wild west of blogs, livejournals and unofficial fansites and the shiny corporate boulevards of Big Media. Very clever - and not in a machiavellian sense yet - again, check the fora to see the true devotion/sharp insight/rapier wit/apparently unlimited time of kids who want to talk about telly ... Look at the number of replies and views!

Anyway. Wikipedia also has some good stuff on the black/white allusions etc.. Could this show have occurred in this form before the internet? I think not. That's not to say that previous shows didn't occasionally have depth, discussion, mythology, complexity etc. They clearly did - it's just a different kind of depth. Google for the title of your post and you'll see ...