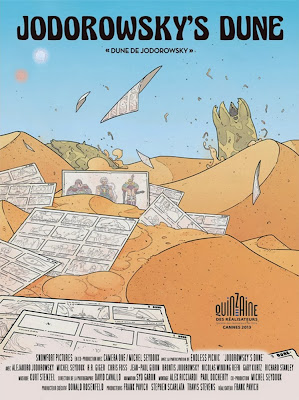 At last! You could probably hear my cries of relief and joy all over the home counties this weekend as I finally saw the documentary film which, above all others, ticks innumerable boxes in my personal pantheon of GOOD STUFF: Jodorowsky’s Dune.

Frank Pavich’s film concerns itself with the career of the great maverick director/shaman/writer Alejandro Jodorowsky up until 1972 and his subsequent attempt to make the greatest science fiction film of all time: Dune. To clarify: for anyone who doesn’t know (although I doubt that you’d have read this far unless you DID know about it): this is not about David Lynch’s epic folly (of which more later) or the truly dull TV series, but a film which was never allowed to progress beyond a meticulous planning stage and thus gained a mythical status, not just for its breadth of vision but also for the team which ‘Jodo’ (as he’s nicknamed by his friends) assembled to make his vision materialise.

Pavich’s documentary is a treat because, even to an obsessive like myself, there are plenty of facts hitherto unrelated, as well as Jodo’s own ability to talk with seemingly endless energy and commitment to a body of work which to many would be a bitter reminder of a still-born project, doomed by Hollywood money men and people who weren’t brave enough to trust in his vision. Only at the very end of the movie, after Jodo reaches the point in the story where the death blow comes, do we even glimpse him as anything like the 84-year old man he actually is. At other times you’d swear he was half that age. Such is the power of the man.

As an avowed fan of his previous mystical films, ElTopo and The Holy Mountain, it might be easy to see this as hagiography, but once you’ve sat through Jodorowsky’s Dune I’m willing to bet that even the most prosaic amongst you would have fallen for him. 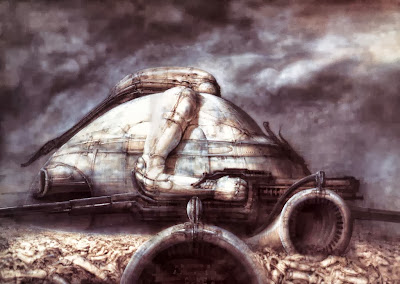 But why should such folly be so celebrated? The reasons are manifold: At the London Film Festival screening I attended other legendary unborn projects such as Orson Welles’ Heart of Darkness were mentioned, and that’s no coincidence. Because Jodo’s Dune was all set to bring together not only actors like Welles, Gloria Swanson, Mick Jagger, David Carradine, Amanda Lear and even Salvador Dali (as the Emperor), but more importantly a production team that included Dan O’Bannon, H.R Giger, Jean ‘Moebius’ Giraud, Chris Foss and music by bands such as Pink Floyd (harangued into the project in the middle of mixing Dark Side of the Moon while having a break for burgers) and Magma. And that’s not to say that these were just on Jodo’s wish-list for the film. They’d all agreed to take part in what he wanted to be nothing less than a new form of revolutionary cinema which, in his words, would be the equivalent of an acid trip. But overall, the reason that Dune is still mentioned in awed tones is because just about everyone connected went on to have a massive effect on the way in which we view not only Science Fiction cinema, but cinema as a whole.

The real star of the film isn’t, however the hyperactive Jodo, but the book which he and his producer Michel Seydoux took to Hollywood, containing not only a complete shot-by-shot storyboard of the script (drawn by Moebius) but also all the production designs for costumes, spaceships and buildings. Only two copies of this legendary book exist and the film lingers long over the pages of Jodo’s copy, demonstrating Nicholas Winding Refn's (who dedicated his last film to Jodo and is regarded by the master as his successor) claims that when Alejandro sat down and went through the storyboard with him frame by frame, explaining the plot, he was, in effect, the only man to have ‘seen’ the unmade film.

The size of a telephone book (as Frank Herbert apparently described it) THIS is the real film. Any publisher with an ounce of intelligence would, at this very moment, be negotiating the rights to publish it.

Without giving away too much, the stories surrounding Jodo’s Dune are often (as you’d expect from a Tarot master and countercultural icon) larger than life itself. The basic facts are themselves hilarious. Jodo never even bothered to read Frank Herbert’s book before approaching his producer (“I could have made Romeo and Juliet, I just chose Dune because I knew it was popular’). Actually it seemed that very few of the production team of Jodo’s ‘spiritual warriors’ had more than a passing familiarity with the source material. Jodo’s cast and crew were assembled from a wish list that became reality by a process of almost literally magic coincidence and Chilean guile. Orson Welles was tracked down by staking out all the best Parisian restaurants and lured by the promise of catering from his favourite chef; Dali was promised the largest rate per minute of all time for any film actor (little did he realise that Jodo only wanted about three minutes work from him); but best of all is Dan O’Bannon’s tale of how Jodo got him stoned on ‘very special marijuana’ and then seemed to hypnotise him into agreeing to move all of his life to Paris to work with the other ‘warriors’.

Most importantly Jodo seemed to operate on a brilliant combination of gut instinct and dream-fulfilment to choose his cast. When he met the legendary Doug Trumbull to ask him to design the special effects he instantly disliked him for his lack of spiritual depth. Never mind that Trumbull was THE guy at the time for FX (2001 etc), if it didn’t feel right he wasn’t onboard. This integrity only adds to the sense that Jodo knew what he was doing.

Central to all of this was Jodo’s vision of a film that would loosely use Herbert’s tale of intergalactic Jihad and planetary consciousness-raising as a jumping of point to convey his own tale of transformation and rebirth. And so committed was Jodo that he even cast his 12-year old son Brontis (who also had starred with his dad in El Topo) as the central Paul Atriedes character; committing him to a punishing regime of martial arts training in a move that, even to this day, neither father nor son seem to know whether it was cruelty or artistically justified. It has to be said, however, that the extremely handsome Brontis seems like one of the most well-balanced men you could hope to meet.

Months of hard work resulted in the legendary production bible that then was taken to Hollywood to raise the final $5 million. Only then did the moneymen realise what they were signing on for. Jodo himself thought the film could easily run for 10 or 20 hours, but even discounting such bravado, what seems to have finally sunk the project was the fact that his vision was SO complete. Meeting with film industry financiers with just about every detail fixed and realised seems to have scared them more than a Don Simpson-like 30 second high concept pitch and a line of toot. Already a little freaked out by El Topo and The Holy Mountain the whole grand design unravelled. Hauling the book around the studios it became rapidly apparent that this was doomed to failure. No one would back him. The production stalled and finally the rights were bought by Dino DeLaurentis; the rest being rather painful history.

It’s here that the film falters a little. It’s very easy indeed to poke fun at Lynch’s critically-flawed attempt at capturing the sweep of a story that – let’s face it – could only be done justice to in a 20 hour movie. Cut down from a five-hour print, Lynch’s film isn’t ALL bad. It has its own production design delights and (as you’d expect from Lynch) its dark portrayal of the evil Harkonnen family is brilliantly twisted. While it’s a joy to see Jodo relate how he finally gave in to friends’ insistence that he needed to see Lynch’s version, only to discover to his relief that it was awful (‘It was a human reaction’), Pavich admits that he hasn’t seen it, making the mocking tone a little hypocritical. 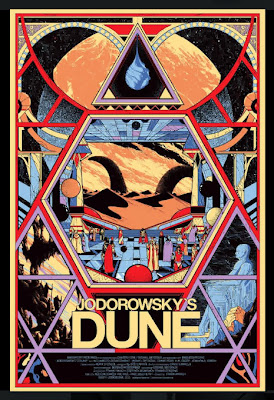 But this is a small gripe. The film’s point (well-reinforced by a montage of clips from other films at the denouement) that what Dune really did was provide creative fuel for a whole generation of great movies (O’Bannon, Moebius and Giger making Alien for starters) is well made. Essentially Dune did more good as an unmade production, and in a sense, as Jodo points out, it was made: not only in the various elements that crept into other films but in the subsequent collaborations that Alejandro completed with Moebius (The Incal) amongst others. Ultimastely it’s a story of creative freedom versus the money machine, and of how one man’s indomitable spirit refused to be broken. More than just a SF fanboy’s dream, Jodorowsky’s Dune shows us all how to be brave in the face of adversity.
Posted by Chris Jones at Friday, October 18, 2013