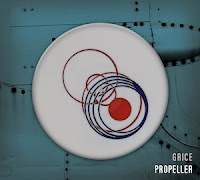 An all too brief and all too delayed response to something rather splendid which came my way a few weeks back: Propeller is a new album by vocalist (and multi-instrumentalist) GRICE, teamed with producer and arranger Lee Fletcher, and out now on Hungersleep records. It's a bit of a corker, really.

What we have here is an example of what happens when artist and producer hit that sweet spot where ambition meets the creative space that's perfect for reaching the sounds in the artist's head. Propeller has the sound of an album that's had a lengthy gestation, at least conceptually - it has the effortlessness of something that has been born out of necessity and the intricacy that signifies people who KNOW WHAT THEY'RE DOING.

Vocally GRICE inhabits that space that could only be described as that of the modern post-prog milieu: mixing the intensity of Mark Hollis or Tim Bowness with a Beatle-esque sweetness. In fact the harmonies are the first thing to hit the ear, a kind of warm West Coast layering, bent to the service of perfect pop. Fans of everything from CSN&Y to Jellyfish will all feel at home here, right from the first number.

Grown up arrangements lift songs while eschewing too many obvious routes, allowing the listener to safely journey between, say, the avant string abstraction of Summer Screams to a more conventional (in a Crowded House kinda way) song like The Cage without feeling any bumps. But what really brings the whole thing alive is Fletcher's production. Glimmers of dusty electronica, found sound (including birdsong at one point) and filtered fragments haunt the cracks and snapshots between the songs, spiced up by the soundscapes of Markus Reuter.

In fact, overall the duo have managed to assemble a fairly impressive cast of musicians to add the requisite fairy dust. Pedal steel legend B J Cole appears on two tracks, while elsewhere you can feel the benefit of Luca Calabrese's Hassell-esque trumpet and not least the sax of Raphael 'Baker Street' Ravenscroft. In fact it's the inclusion of Ravenscroft along with the Fender Rhodes of Fred Ehresmann which gives tracks like Broken Arrow a wonderfully jazzy vibe, not unlike some lost Island album from the early 70s. This is a good thing.

It's not all plain sailing. Lyrically the album tends to veer between cliche and rather wilful obtuseness (is that a deliberate referencing of the Beach Boys' God Only Knows at the start of the rockier Highly Strung?), while on tracks such as Let It Go, vocal performances can over-egg the straining credibility. And this reviewer always feels slightly uncomfortable when Uillean pipes are whipped out (on the title track) to signify 'yearning'. Yet these are minor gripes. When GRICE's lyrics err on the side of bitter honesty as on Broken Arrow none of this matters. The power of the material wins you over.

As a piece Propeller stands proud as an example of what can be achieved by talented people who still believe in the old fashioned notion of good songwriting, especially when teamed with sonic adventurousness of Fletcher's ilk.

In short: this is highly recommended.
Posted by Chris Jones at Friday, April 20, 2012

Thank you for this review Chris :-) Much appreciated!

Thanks Chris for your review of my album - I have put a link to it on the new releases page of my website.
best - GRICE

An absolute pleasure, GRICE. It's a great piece of work. Congrats