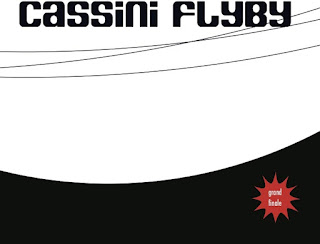 No, it's not the end of this blog (although time constraints and more activity on my other site have made this place all but redundant these days), but the title of the debut album by my band from South London: Cassini Flyby.
Recorded over two years ago, it's been a slow journey (not unlike the Cassini mission) to a conclusive physical (and streamable) release. To save time, here's the official PR release to set you straight on what to expect on the album. Without being too egotistical about it all, it's a pretty cool slice of space jazz rock, propelled by Tom and Pete's fantastic rhythm section. My guitar just adds icing to an already explosive cake.


"In 2016 Tom Clarke (drums), Peter Marsh (bass & electronics) and Chris Jones (guitars) – all veterans of London's improvisational/experimental music scene - began regular sessions in the heart of London's Brixton. Combining a shared love of jazz, krautrock, Canterbury and electronica, the band began exploring the possibilities of improvisation, but combined with a strong rhythmic undertow.

Simultaneously, NASA's Cassini-Huygens probe, which had begun its own exploratory journey nearly 20 years beforehand, had entered the final phase of its mission: a series of data-gathering 'flybys' of Saturn and its satellites. During the band's earliest sessions, the probe was regularly sending back sublime and awe-inspiring images of our Solar System that seemed to mirror the ominous yet driving aesthetic at the heart of the trio's music. Suddenly, the band had a name…

Like all semi-improvised music, this was a delicate balancing act between form and chaos; between the solid and the ethereal. At the beginning of 2017, Tom and Peter entered Baby Microbe studios in Brixton to record a set of backing tracks which were subsequently sent to Chris; now living in Northern Germany. Guitar overdubs were recorded in Germany and then taken back to London to be mixed.

The Cassini mission's final approach toward Saturn's surface was known as the 'Grand Finale': a carefully pre-planned and audacious dance between the various moons and rings of the giant planet that ended in a fiery plunge into the super-dense atmosphere. This combination of daring, science and auto-destruction also plays out in the band's debut album. From the vastness of space to the microscopic click's and buzzes of digital circuitry under duress, Grand Finale is a wild ride into the unknown…"

The album was released on October 18th and is available via the Off label site here.
Alternatively the album is available to download or stream at these locations.
Posted by Chris Jones at Tuesday, October 22, 2019