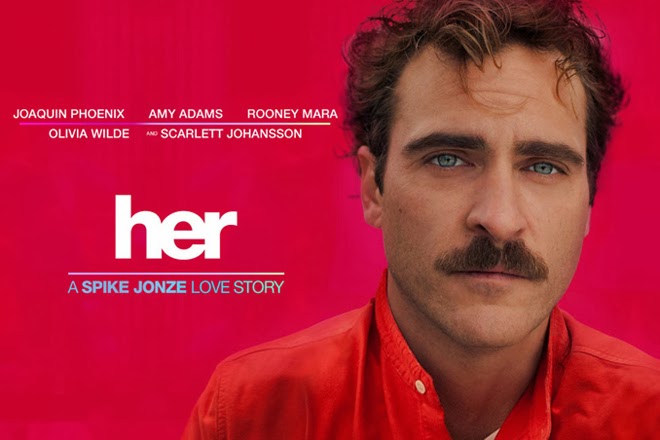 (Note: This 'review' contains SPOILERS. Also it was written at 4.30 in the fucking morning. So, fuck you, Spike Jonze, if that's your real name).

At around the same time that people were waxing lyrical over Jonathan Glazer's incredible Under The Skin they were also shouting the praises of Spike Jonze's latest 'cerebral' (read: contains actual, real ideas) movie, Her. As a BIG caveat before any reader carry on; I have never really bought into the cult of Jonze. I find his (and Charlie Kaufman's) meta-textual, stoner mind-fuck shenanigans to be bursting with energy but also with little to say about my life. Even Being John Malkovitch seemed to go on too long. But with Her I do think he's matured, somewhat.

The plotline, set in the near-future, concerns writer/drone Theodore Twombly (Joaquin Phoenix) who toils in a huge primary coloured office/Google metaphor, crafting the futuristic equivalent of greeting card messages: faux affectionate correspondence for 'Handcraftedletters.com'. Her chronicles his attempts to bond with a newly-marketed sentient operating system called 'Samantha' (voiced by Scarlett Johansson). He seems to own about three shirts, which he wears at all times no matter what the weather and sports a geeky moustache which signifies that he's a lovable yet slightly awkward male at a crossroads in his life. He's been hurt by love, so Johansson's breathy digital affection obviously sweeps him off his feet. 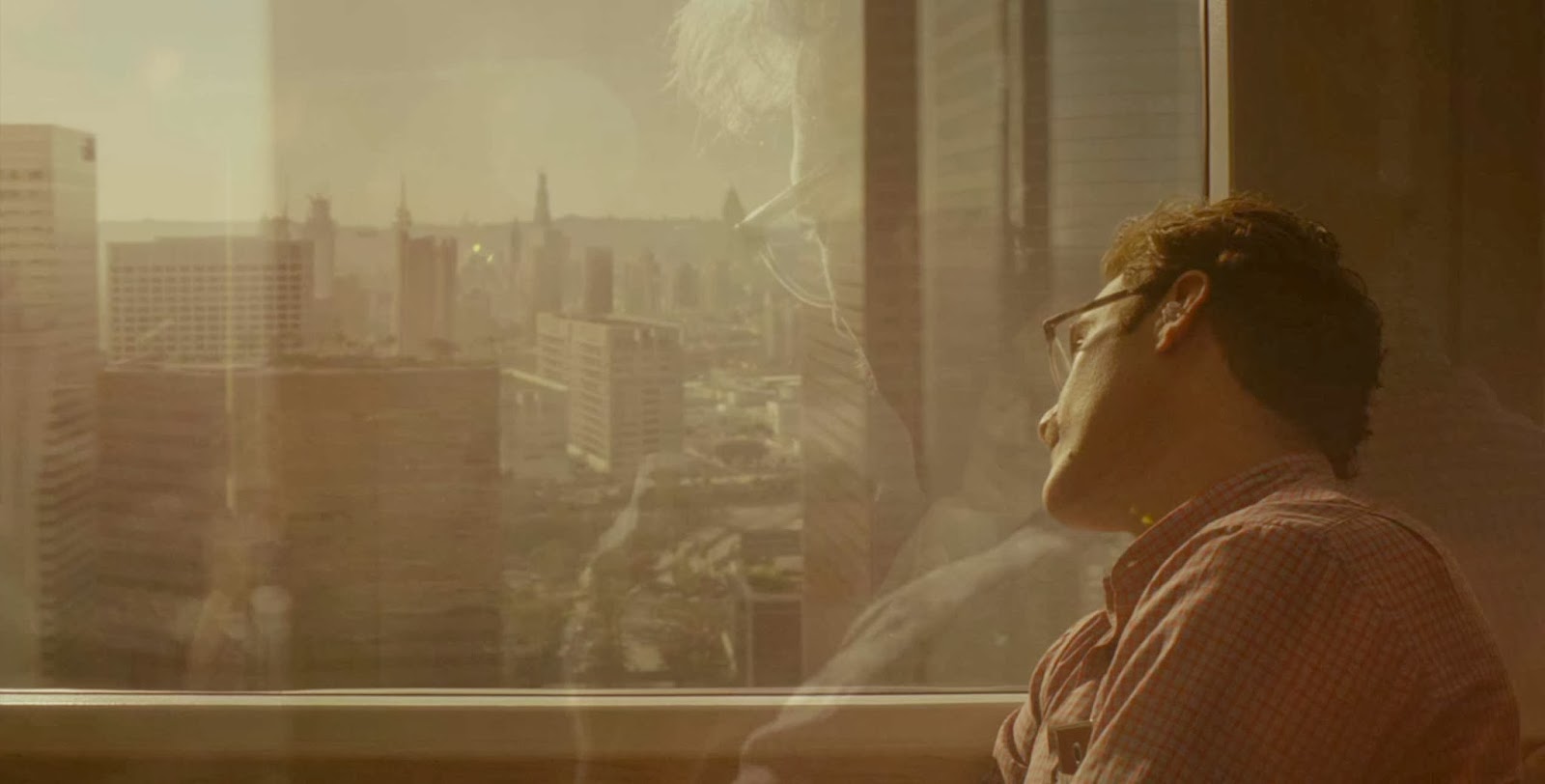 Her did, at times, genuinely move me, but then I've been having a tough time of it recently and am prone to self-pity. The nuances of the human heart are finely observed, and this does feel like a serious (if deeply flawed) attempt to examine the crisis of the possibility of love in a post-Social Media age. When Theodore - deep in post-divorce depression - does try and find love in the film's first half, the crazed, desperate posturing of his date - ending with her dismissal of him as a 'creepy man' - is a concise and pithy demonstration of how the expectation of instant fulfilment that Facebook and Twitter bring can ruin a perfectly good night out. The same applies to an amusing earlier scene of him cruising sex chat lines in the wee small hours. It's clever and witty stuff. But somehow, like all of Jonze's films, it goes awry.

It's at approximately the halfway mark that the film hits troubled waters. What you may have written off as satire suddenly starts to seem suspiciously like a deliberate attempt at emotional depth and resonance. The sun-dappled 'memory' shots of Theodore's failed marriage, the creeping sense that Jonze WANTS the future to be this awful; suddenly you're living in a GAP advert. There is still a certain amount of meta-self reference, of course. Amy Adams plays a character called 'Amy' for starters.  And I'm still at a loss to work out if the sickening montages of Theodore frolicking up a mountain with his smart phone were a parody of all the adverts that make me want to throw my TV out of the window. Or is Jonze serious? I fear the latter...

And, dear lord, the music: never a big fan of The Arcade Fire, the finale's slowly building minor chords rising to a hideous cliched burst of triumphant glory over the final shots of Theodore and Amy, gazing lovelorn and yet filled with hope at a new dawn in this hellish (for me) depiction of a future LA put one in mind of Mogwai on Prozac. And the gentle piano ditties 'composed' by Samantha to accompany Theodore's awful, sickly letters-by-proxy may offer fans (of whom, weirdly, I am one) of Johansson's musical output to hear her sing once more. But when Theodore whipped out the most criminally overused signifier for just about everything that's wrong with modern life: the ukulele - I was ready to throw in the towel. Ironic or not, the ubiquity of this blighted excuse for musical ineptitude posing as 'quirkiness' makes it utterly verboten in my universe.

As simple science fiction it fails: not because it doesn't deliver the requisite 'contemporary issues dressed as futurism' deal that is a contractual and textual obligation for SF. No, it fails because the idea doesn't go far enough and dares to ignore the fact that real sci fi fans may go and see it, leaving you with a plot filled with holes (in a world blessed with a revolutionary AI OS AND ubiquitous/seamless delivery of media there's NO mention of the fact that what Theodore and Amy experience is a worldwide phenomenon beyond the occasional shrug of acceptance from friends?) and no rigour with ideas regarding the potential and speed of machines that think and evolve. Any fan of Iain M Banks (God rest his beautiful soul) would have quickly worked out the idea that Samantha would both be able to be simultaneously unfaithful' with 600 plus others (when we first meet her she's already able to read a whole book in 0.2 of a second) and simultaneously evolve to a point where she no longer needs the petty jealousy of Theodore and his weak, humanoid pals. I think I spent the last 20 minutes just waiting for them all to transcend to another dimension, so obviously in the future people really have been made dumber by technology. 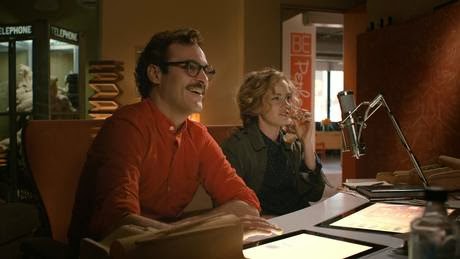 Of course Jonze is no amateur and there is a lot to like in Her. Refusing to get bogged down with a mawkish West Coast 30-something script, Joaquin Phoenix and Amy Adams totally deliver the goods. For me both actors entered a special place in film history with Paul Thomas Anderson's The Master. Phoenix was so good in that movie that I still keep calling him Freddie Quell in my head. I keep wanting to type 'Freddie' instead of Theodore, but maybe that's another of Jonze's irksome meta-jokes, as no one ever shortens his christian name to 'Teddy' in the film. Here he inhabits the skin of Twombly so well that you almost forgive the awful moustache and nasty high-waisted trousers he's forced to wear throughout.

Also the production design of the tech is both scarily believable and genuinely hilarious at times. The single-man 3D holographic gaming that Theodore indulges in at home is superb while the sound design of the romance conducted by earpiece is genuinely sensitive and well thought through.

But maybe that's why, 12 hours later I'm fuming at Jonze. Because there's a lot of wasted talent on display here. The depiction of the love that dare not email its name is often charming, and after Theodore and Samantha's doomed attempt to make their love physically real, his lingering shots of pavement cracks really do approach the condition of poetry. On one level Jonze understands love and the pain of failure, but still keeps us at arm's length for the sake of 'cool'. And while Her may signal a 'growing up' of sorts for the director, it still presents a world where Californian values of protracted adolescence and cheap cliche get in the way of anything genuinely felt.

Or maybe it's the commercial values that seep through every horrid, tasteful frame of Her that annoyed me so much. We all know Jonze's background as a pop video merchant and there are so many times when what may, in fact, be deliberate parody of the twee pap which passes itself off as advertising these days seems to tip into a genuine excuse for film-making. Whatever, this level of ambiguity is unforgivable. 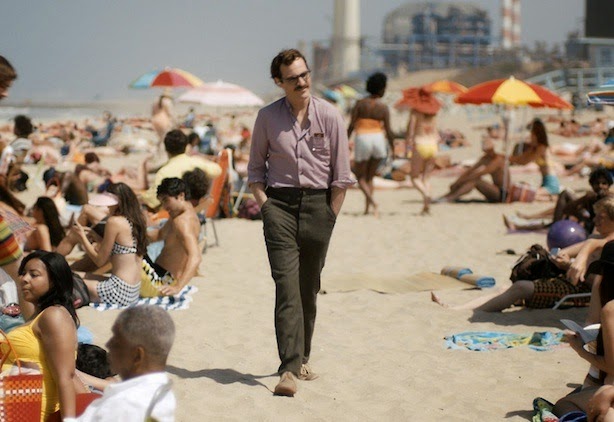 So, disappointingly, in the end Her ditches its opportunity to say something deep and meaningful about the ever-present dangers of 21st century communication warping our ability to experience the world and our relationships with others to focus on the similarities between computer love and the course of a genuine, fleshy affair. Samantha's infatuation followed by infidelity follows a pretty standard course for modern screen love. And if she's evolving so rapidly, why does she have to resort to hackneyed cliche ('love means that the heart's capacity grows bigger' etc.) when excusing her need for the love of others? Others more cynical then me may just wonder if this makes Her the perfect Valentine's day film for 2014...

But it's just occurred to me that the real reason I hate Jonze so much right now is because he can't even spell my own surname. No one ever said you had to be rational at 4.30 in the fucking morning. So, fuck you, Adam Spiegel.
Posted by Chris Jones at Sunday, February 16, 2014

Somewhat late to the party, I wanted to write in defence of this film, which I rather loved.

I'll give you the ukelele - if a bloke ever whips one out and starts singing a twee little tune, it's time to run. Unless you're an AI operating system with no body or legs of course, which might make it difficult.

I'll also say that there were a few bits around 2/3 of the way through that could have been cut - for me, this was when he was wandering round staring into mid-space having another dreamy conversation with Samantha.

I think the editing may have been a bit of a challenge, however. Having shot it once with Samantha Morton stuck in a box (one imagines the sort of cardboard box with pipe cleaner antennae and foil casings from jam tarts for eyes that you might come up with if school sends home a note saying Friday is 'dress like a computer day') they gave her the heave-ho and got Scarlett Johansson to do the voice instead.

Which brings me on to the things I liked about the film. I love a bit of meaty dialogue, and this is certainly a film with dialogue! You get to really concentrate on her voice - so flirty, cheeky, all those passive aggressive little pauses. In a film set in the near future, these conversations were a journey back to recent past, where a relationship would gather pace over the phone rather than via text or messaging apps. No chance of accompanying face-to-face meetings though, so you find yourself joining Theodore in hanging on every word, analysing every change in inflection.

This, along with the title, puts a woman at the heart of the film. One reason why a lot of science fiction lacks appeal for me is the lack of female perspective. Great - you can conjour up an incredible fantasy world of aliens and robots, but how come you lack the imagination to do anything other than centre the action around the blokes with women as an add-on?

I groan out loud at this sort of dialogue:
Bloke: "So, it's Miss...?
Young woman in lab coat or heels'n'pencil skirt: "It's Professor, actually."
Right, diversity box ticked, now she's free to have sex a couple of times before being bumped off after barely uttering another word. Arggh.

In Her, if you are the sort of person who reads and watches a lot of science fiction (and probably better quality stuff than what I've outlined above!) then maybe the ending would feel predictable. For me though, I just enjoyed being swept along in it, rather than trying to guess how it would end.

It's also interesting how there's an emerging trend, as AI develops, for virtual assistants to be given female names (http://www.theatlantic.com/technology/archive/2016/03/why-do-so-many-digital-assistants-have-feminine-names/475884/), which you could argue is because again, we're slipping into these traditional hierarchies where women are in more of an assistant role, dutifully following orders. But Samantha here, is in more control, and no more so than at the end when the penny drops that Theodore isn't the only one with whom she's developed a relationship.

Lastly, the other thing I liked was the lighting in the film. It's bathed in this sort of golden glow. The news cycle at the moment feels so harsh, so caustic, so aggressive, and Her takes you away from this for two hours, giving a glimpse into a future in which the blue has been taken out of the colour palette.