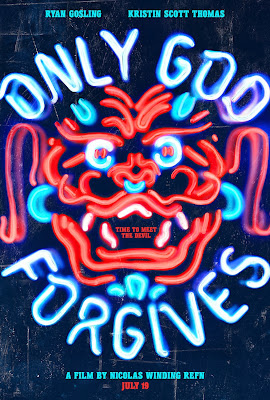 One of the most amusing things about London in its pre-Xmas orgy of consumerist debasement, is seeing the incongruity of advertising the DVD edition Nicholas Winding Refn's Only God Forgives (out today) as if it were some 'must-see' blockbuster for slavering fans of Ryan Gosling. Anyone who has seen this homage to male impotence, castration, ultra-violence and religious futility (no, really) knows full well that this movie strays about as far as you can get from anything Gosling's done before. One excellent review rightly pointed out that whereas Drive - the movie that established RG as the closest we have to a modern-day Steve McQueen - is a Gosling movie made by Refn, OGF is a Nicholas Winding Refn movie which just happens to feature Ryan. And so it is.

Recently I seem to be seeing a lot of films that feature either little dialogue or few characters. Or both. Jonathan Glazer's film Under The Skin (which I'll write about once I'm done with this piece) has both of these traits. Cuarón's Gravity got away with pretty much Sandra Bullock all alone in space with her grief. Is this laziness in screenwriting? A kind of anti-Altmanesque tendency for minimalism in an age of austerity? Who knows? But OGF cruises by fuelled mainly by enigmatic silence punctuated by both visual and semantic violence, along with a palette that is drenched in hellish neon tones. Wordy, it ain't. Stylish it surely is. And a really great movie to boot. 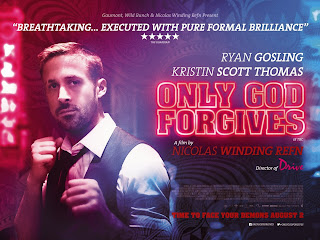 What's more, despite the poster (above) that wants to tempt all the Gosfans in, Gosling is absolutely not the hero. You may be tempted to say that the hero is Vithaya Pansringarm, the man who plays the un-named Chang: dispenser of intractable justice who dishes it out with a sword; fists, guns, and - for five excruciating minutes - with flower arranging spikes and fruit knives. But as Refn makes completely clear, Chang's not a character to be understood or empathised with. He's God: literally. And when Ryan asks him late in the film whether he wants a fight, you know that  there is never any doubt that God is in charge and that Gosling will get his attractive little ass whipped. He's already survived an assassination attempt, and given a grim, tortuous lesson in old testament theology to one of his assailants. And when Chang relaxes at the end of a day's maiming and score settling by singing a little karaoke you actually feel as respectful as his audience of police minions. 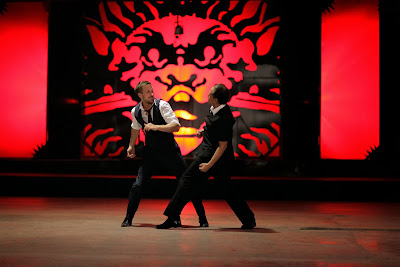 I came late to OGF, missing its theatrical release, but in the intervening period before its release on Blu-Ray and DVD I saw two films which made me excited to finally catch it.

One was the documentary on Jodorowsky's Dune which I've written about on the is blog. This features an interview with Refn who, as mentioned in most reviews, dedicated OGF to Jodo. More on the Chilean's influence later.

The second film I saw was Refn's own earlier film, Valhalla Rising (2009), which also has hardly any dialogue (and in fact none whatsoever from the 'star', Mads Mikkelsen): an everyday tale of vikings, aliens and - again - God.

Throughout Refn's career thus far he's been lauded by all the right critics, but has yet not quite found his own signature style (beyond his self-admitted pornographic approach to extreme brutality and a tendency to shoot cityscapes at night), but at least he's been looking in ALL the right places.Valhalla Rising references Herzog (in its Quixotic quest for fabled lands unknown to Christian pioneers), as well as (the good bits of) Terrence Mallick's New World.  Drive, a film which he and Gosling rescued together, owes a whole lot to late period Michael Mann as well as a small amount of Mulholland Drive-era David Lynch. But both of these films, as well as OGF prove without a shadow of a doubt that Refn should continue in an upward trajectory, making arthouse thrillers for the post-Scorsese generation that never give away too much. He makes you do at least some of the work yourself. 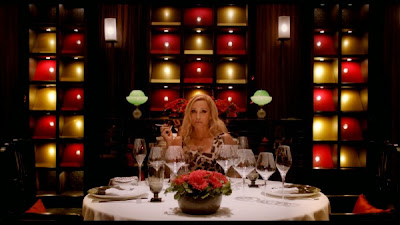 Like the anti-Tarantino; when he's the writer his dialogue is so sparse as to make you leave the cinema feeling like there was none at all. Valhalla Rising was pretty much a silent movie. But OGF uses the enigmatic silences to really focus on the words when they finally do arrive in tiny bursts. No one is leaving a screening without remembering Kristin Scott Thomas (as a brilliantly foul-mouthed mother-cum-Donatella Versace from hell) talking trash about Ryan's cock (in relation to the size of his brother's, that is) just after she's insulted his prostitute girlfriend. And when Ryan finally says to Chang 'Wanna fight?' it's quite comic. Deliberately so, I feel. Refn always knows when the nail-bitten-to -the-quick tension needs some jocularity. And after all, OGF is about opposites. It's about God living in the modern hell of downtown Bangkok. It's the film where Ryan Gosling dresses up in a three-piece suit to have his face-off with his maker and destroyer. It's a film where bad guys lose every single time because the law is absolute. 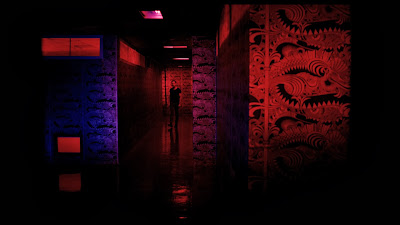 This lack of moral ambiguity explains why the film's been talked up by the director as a Western. The plot is a paragraph of slim action and the running time is amazingly brief. One of two drug-dealing brothers dies after committing an atrocity. The gangster mother comes to town seeking revenge. She berates her younger son for not exacting revenge (because he's the one bad guy who actually seems to guess that he can't win). Everyone gets killed or maimed by the vengeance of the lord. The end. But Refn understands that the best westerns adapt mythical stories. Contained in OGF is a huge chunk of Oedipus: Gosling's transference of his sexual fantasy life to his mother is something that's almost laughably blatant, shocking and literally visceral. But the Freudian bent of the film (lots of darkened doorways leading to amputation), slow tracking shots along blood red corridors decorated with dragons etc. is maybe the least interesting part of the whole movie. It's too Lynchian.

Other references would be Refn's pal, Gaspar Noe's Enter The Void*, with its night time neon glow making most of the film seem like it's shot in some underwater inferno. But overall I think OGF shows that Refn has moved much closer to refining his own approach. Which brings me back to the Jodorowsky references. While you can't deny Refn's admiration and devotion to Jodo, it's hard any overt influence on his film making except in his willingness to depict men as metaphors, allegorical signifiers conveying spiritual truth. And pretty primal truth, at that. Many critics saw the brooding silences and monosyllabic acting as a sign that Refn was sacrificing content for style and covering up a lack of substance. I disagree. I think he's stripping away the trivial to try and get to some very deep notions, ones that are definitely worth ruminating over. It matters not that the mysticism of Jodorowsky is buried beneath buckets of severed limbs and skewered eardrums. I still came away from this tight, exciting film with a sense that something profound had been said. In the same way that Drive left you feeling that you hadn't really seen a film about a getaway driver and some gangsters, you'll come away from OGF feeling that this wasn't actually a film about revenge at all. Maybe this is Refn's signature style: the smuggling of truth in unusual ways. And maybe this is the perfect time for Refn to announce that he's going to make a film version of Jodorowsky and Moebius' Incal graphic novels. I'm certainly excited by the prospect.

So, Only God Forgives may not be the heart-warming family film for Boxing day, but it is a beautiful meditation on violence and retribution. It's definitely one of my films of the year.

*While many critics saw OGF as unforgivably pretentious, it was nothing compared to that film.

Only God Forgives is released on DVD and Blu-Ray on December 2nd.