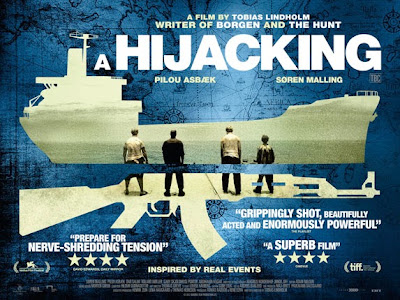 Directed and written by Tobias Lindholm, who both co-wrote the truly astounding The Hunt with Thomas Vinterberg as well as several episodes of the equally highly-regarded TV series, Borgen, A Hijacking bears out the simple fact that, for reasons far more complex than I know about, the Danish seem to be making just about the most interesting on-screen stuff in the world at the moment.

Regular readers will know how blown away I was by The Hunt – which pushed Mads Mikkelsen into a world-beating category (for me). And despite not being totally convinced of Nicolas Winding Refn’s genius as yet (I haven’t seen Only God Forgives so far), I really enjoyed catching up with the completely barking Valhalla Rising recently (which also stars Mikkelsen, albeit in silent uber-violent mode: possibly Winding Refn’s real USP when it comes to acting tropes, it seems. Cf: Ryan Gosling in Drive) – kind of Aguirre: Wrath of God meets Outlander.

Anyway, enough digression; A Hijacking stars two of Borgen’s stars as the main characters: Pilou Asbæk plays Mikkel, the ship’s cook, who (due to his language skills) is chosen as intermediary between the Somalian pirates and the heads of the shipping company who own the tanker held for ransom in the middle of the Indian Ocean while en route to Mumbai. Meanwhile his dramatic counterpart is Søren Malling who plays the (initially) steely CEO of the company, Peter. 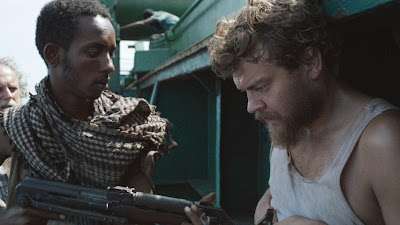 At the heart of the film is the tug of two forms of free market capitalism focused on their profit-margins while, in the centre, are the human beings and their messy inconvenient emotions. Even the pirate's middleman, Omar, seems to hate his part in the whole business, remonstrating when it's implied that he is one of the brigands.

On the ship owner’s side is the nagging insistence that negotiations be wrapped up as soon as possible before the negative PR sends stocks tumbling, while the pirates hold out for as large a slice of Western currency as they can. Meanwhile the real people left to do the dealing slowly
unravel in front of our eyes as the four-month talks drag on and on.

Shot very much in vérité style with no recourse to Hollywood sensationalism, the film mostly eschews any onscreen violence in favour of brilliantly filmed reaction shots or the dramatic aftermath. A key scene in the portrayal of Mikkel’s transformation from chirpy, homesick crew member to traumatised thousand-yard-stare casualty is when he’s forced by the pirates to slaughter a goat for food. Only following the act does the camera travel slowly down to show him gently stroking the dying beast. It’s unbelievably powerful story-telling. 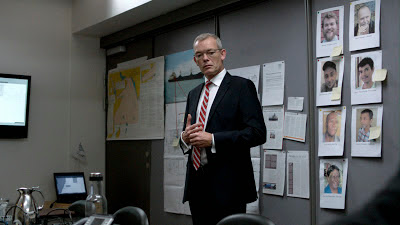 Instead the camera follows events impassively. The film’s other key transformational scene comes when CEO Peter is left at the end of a phone, unsure as to whether Mikkel has been shot. Alone, he moves the portrait of the cook onto the office's main whiteboard, unable anymore to ignore the responsibility he has for his men’s lives.

At just over 75 minutes this is spare, economic film-making which leaves you in no doubt as to the real cost of such events. Like The Hunt, it will leave you shaken but uplifted. Catch it if you can…
Posted by Chris Jones at Tuesday, August 27, 2013