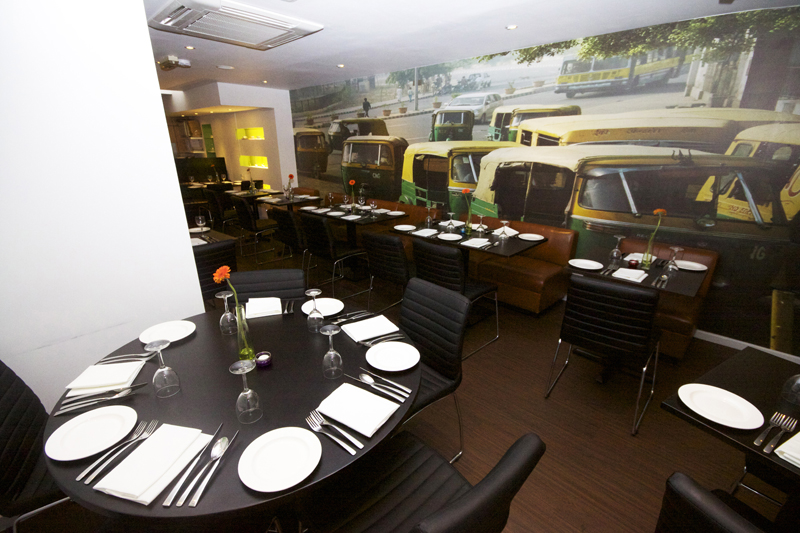 An unusual one for this blog, but sometimes we have to go beyond our comfort zones.


Having said that: this is all about comfort. Amirah's Kitchen - positioned a mere hop and a skip from Wandsworth Town overground - and thus easily accessible for all within the environs of the newly-completed Ginger Line - isn't brand new, but deserves a mention for essentially altering my whole conception of Indian cuisine.


The restaurant is situated on the charmingly village-y Old York Road in Wandsworth, surrounded by a healthy amount of local businesses (a mid-meal discussion concerned the disaproval being meted out by locals for the recent arrival of a branch of Sainsbury's). While I'm no food critic, I'm well aware that a lot of Indian eateries have moved on from the red-flock-wallpaper-and-generic-sitar-soundtrack experience that we've come to know and love. What I didn't know was exactly HOW far. Invited to taste a full range of their very tasty wares I attempted to be clever by repeating a piece of information that I'd actually picked up from one of my current projects: namely that Chicken Tikka Masala is a) the UK's favourite dish and b) it was invented in Britain to cater for our tastes for having meat in a sauce. The manager not only knew all this but also proceeded to eloquently discuss far more interesting facts about the history and importance of Indian cooking to British history (which, of course, I promptly forgot).

The term 'street food' seems more than useless these days. It seems that every vaguely ethnic restaurant describes itself thus. The Begging Bowl, at the end of my home street in Peckham seems to use this as an excuse to replicate the crush of a Thai diner while charging over-inflated prices, but Amirah's uses it to underline the authenticity of its food while allowing its patrons to eat in comfort.

Decorated in a quirky contemporary style with a vast mural of tuk-tuks stretching along one wall, the elongated space is delightfully arranged for a feeling of maximum space. The detailing is well thought out, to the point that I was even fascinated by the unusual cutlery. On the verge of starting a new diet/exercise regime (it's for work) I was concerned that my meal be not only delicious but fulfil my needs for protein and fresh veg. While huge amounts of Indian food subscribe almost entirely to these constraints, I was imensely pleased that our host not only took this into account, but seemed so familiar with the menus nutritional DNA that he could instantly recommend a huge selection of suitable food stuffs. This picture below shows the delights of our starter menu which contained light, fluffy fishcakes, succulent lamb chops and juicy king prawns. This was all served after a well-made G&T (not something you expect from any restaurant, really) and served with a very fine bottle of red (again, expertly chosen easpecially when you consider how much fish we had). To go on too much more would only expose my shortcomings as any kind of food critic, but in summation: the food is light, delicate and unbelievably flavourful. The staff were, as stated, knowledgeable, friendly and ﻿accomodating for someone as fussy as I've had to become. In short, heartily recommended.