I went to the official opening of the new Barbican Cinemas 2 & 3 on Beech St last night. These new screening rooms are ultra high-tech and beautifully designed to show the type of film the Barbican has become renowned for programming. As a treat the guests were treated to a selection of hilarious silent early shorts (each with a musical theme) and (more excitingly for me) two vintage '60s shorts about the planning and building of The Barbican Centre.


The first shown was Barbican Regained (1963): a brilliant little film directed by Stephen Cross and accompanied by a wry poem by A P Herbert, the humorist, novelist, playwright and law reform activist best known for his Misleading Cases. It portrays the 40-acre site that lay fallow and broken for years following WW2. It's amazing to see St Giles standing alone amongst the rubble, as well as the views of St Pauls that will never be repeated. Here it is:

The second film was Barbican (1969) which takes a sardonic look at the planning process behind the area's redevelopment as well as a first look at the ultra-modern interiors of the new apartments. Be warned: in keeping with the era, there is nudity...

These is all deeply nostalgic stuff for me. And as I was in the area I decided to take a few photos which can be found here. 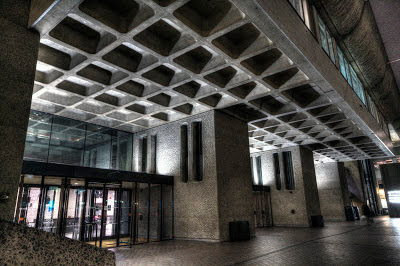