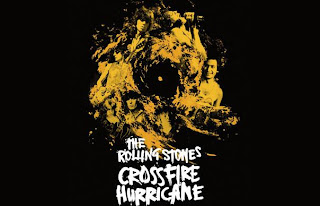 A quick recommendation for anyone who cares about such things. You may, like me, wonder why the Rolling Stones bother to drag their weary carcasses around world stages or release new material beyond paying for huge alimony/medical bills. For me, their continued presence daily diminishes any seismic affect they may have wrought on late 20th century culture. Every self-reinventing remark from the uber-rebel Keef is more embarrassing than the last, seen through a retrospective filter of a post-modern idea of how a rock star should behave. At times you'd think he invented the blues, rather than just appropriating the form in the service of a white middle class music industry.

But last night I watched Brett Morgen's new documentary Crossfire Hurricane (briefly available on the BBC iPlayer, but released on DVD in January) and was astounded. Produced by Old Rubber Lips himself, it's both an honest and excitingly edited summary of exactly HOW important the band were to the '60s and early '70s, and it's also (finally) a salve for any fans who long ago gave up on the band and their increasing irrelevance.

Finally, we get proper respect for the criminally underrated Mick Taylor, who succeeded in replacing the terminally messed-up Brian Jones after he spiralled into self-destruction as he saw what had been his band drift beyond his faltering grasp.

We get voiceovers from all band members, including Taylor and Bill Wyman (who, until recently,  both looked like they'd been airbrushed from history), while the documentary seems to acknowledge that the band's best work preceded the adoption of Ronnie Wood (who, I always thought was taken on more as a drinking/drug buddy for Keef than for any talent he had as a guitarist).

While this only deepens the question as to why the band see fit to drag out their existence, it still confirms what all true fans of the band have always known. It does this by giving us a treasure trove of unseen and rare footage (yes, plenty of it from Robert Frank's grim Cocksucker Blues and the Maysles' Brothers' Gimme Shelter: the footage of Altamont is still scary as hell) - some of it utterly unafraid to show the key role drugs took in shaping their journey. The shot of Jagger having a pre-show toot from the end of a switchblade seems ridiculously posed and still somehow louchely dangerous, perhaps as a slap to Richards who seems to believe that he's cornered the market in scarf-wearing decadence. 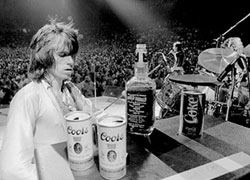 Of course the hypocrisy of Richards' persona really kicks in when he expresses despair at Brian Jones' increasing inability to function on a massive diet of chemicals. I think it was Nick Kent who once spotted that in the boy's club of the band the only crime you could commit was not keeping up, recalling how saxophonist Bobby Keys was sent home in disgrace from an early '70s tour, for not being able to handle the huge amounts of cocaine and booze. 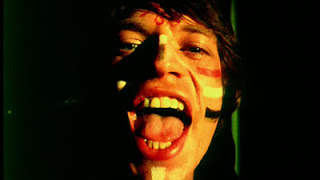 It's by no means a perfect documentary - there's no mention of sixth founding member and road manager, Ian Stewart - but then, for a band who openly admit that for them whole chunks of the period covered are now missing it's probably how it should be. Through a combination of period interviews, rapid editing, private backstage footage (often hilariously at odds with what you're seeing on screen: again Richards' proclamations of how a few days in Wormwood Scrubs somehow transformed him into a bona fide criminal seem woefully self-mythologising, while he still tries to point out that it was worse than Jagger's place of incarceration), you not only get a sense of how insane it must have been to be a member of the band but also how dangerous the band really did seem to the establishment. Richards estimates that for a good two years in the mid '60s the band never even finished a gig. It genuinely does make any so-called rock band from the last 20 years look tame. But then, this Pandora's box could only be opened once,. By 1977 only something like punk, something more about nihilism than sex, could ever come close to replicating what had come before.

Above all Crossfire Hurricane does what Mick Taylor, in his opening remarks asks it to - it reminds you just how much FUN the Stones brought into the lives of a couple of generations. Yes, for a while they really were the greatest rock 'n' roll band in the world.

If only that could be enough for them now.
Posted by Chris Jones at Monday, November 26, 2012