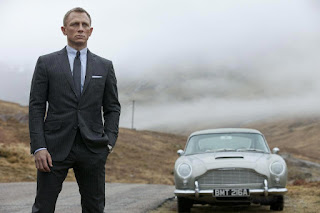 'Where are we going?' asks M, two thirds of the way through Skyfall, 'Back in time' says 007, and he's quite right too. Already greeted by all the heavyweights as a tip top evening out for one and all, this Bond movie seems destined to reside in the top  five all-time incarnations of the world's favourite killing machine, and it does it by plundering all the good bits that reside in the franchise's yesteryears.

Sam Mendes has cleverly reverse engineered the brand, rightfully distilling all the good things that we want from Bond. The martini, the tux (I almost cheered when he finally donned the bow tie), the Aston Martin (which did get a round of applause), the Walther PPK and the occasional hammy quip - all firmly in place but used sparingly. In fact everything is spare about Skyfall. A simple revenge plot that dispenses with hi-tech lairs and millions of bullets and becomes less and less implausible and more human-scale, renouncing the globe-trotting locations for home soil as we approach the denouement.

That's not to say that there isn't the requisite amount of Kiss Kiss Bang Bang here. Train top scuffles, crashing tube trains, a sparkling night time cityscape of Shanghai… even a pit full of Kimodo dragons. The best sequence is a silhouetted fight atop a glass skyscraper - the point where style and action become perfectly aligned. But what makes Skyfall so great is the things that are left out. 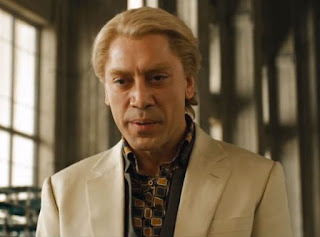 Of course, gone forever (as if we doubted it after Casino Royale or Quantum of Solace) are the 'shag anything' days, with their sleazy, predatory, sexually inappropriate edge. Craig's a far from perfect 007, but his efficiency, as we found out from Casino Royale, is based on his borderline psychopathic tendencies, not as a pervert. Here we're given a little clue into where those issues spring from. The very term 'Bond Girl' seems redundant in this universe. As if to punch the point home, Bond's main libidinous target is dispatched within mere hours of completing the act. Meanwhile Naomie Harris as Eve, a fellow agent, is smart, self-aware and more than a match for the slightly sexist badinage of 007.

Gone, also, is the cheese in the delivery of puns. Dialogue's snappy, and (almost unknown since the days of Roald Dahl scripting You Only Live Twice) genuinely witty, even if it does ham up the Britishness a little too much (no one yet gets to say 'fuck' in 007's world). 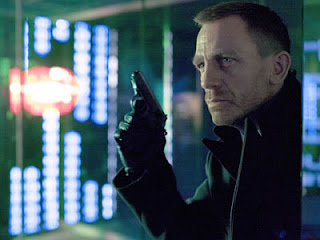 Of course, the reinvention of this (and other) franchises is Hollywood's stock-in-trade right now. So we get a new nerdy young Q (Ben Whishaw - superb), a grittier subterranean headquarters etc. Even Christopher Nolan's finishing piece of his Dark Knight trilogy, having resurrected something made terminally camp by successive blundering by the likes of Joel Schumacher or even Tim Burton, seemed to offer the chance of J Gordon Levitt returning as the Bat. But what's even more amazing is how Mendes has both managed to allow a little arthouse into MI6  and turned things on their head getting all metaphorical and symbolic in the midst of the action, repeatedly using mirrors, the notion of ageing, knives and underground lairs (but this time for MI6, not the villain). And adding to the overall sense of class and (yes) beauty is superb cinematography by DP Roger Deakins.

Add to all this some great performances by Rory Kinnear, Ralph Fiennes and Albert Finney, and you've got a triumphant return for Bond.

At the risk of appearing superficial ... Does we get to see Craig in his pants?