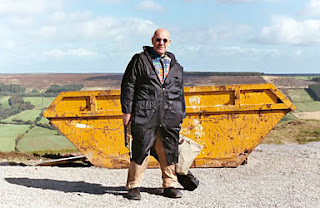 I met him only once. On that occasion I was working behind a desk at Waterstone's in Charing Cross Road, and he asked me for a book about the history of EMI records. He wanted it because he was in it, he told me. I (of course, being the kind of man who cares about such stuff) recognised him immediately, and said hello. We must have spoken for, oooh, at least a minute. He struck me as being extremely nice and self-effacing.

Like the lightweight I am, I really know Lol's work via the releases that were the closest to 'commercial' that he ever got, with Kevin Ayers and also Gong: one of the satellites of the Canterbury scene. It was only much later that souls far more hardy and knowledgeable than I introduced me to both his work with people such as Steve Miller (no, not THAT one) on the rather fabulous double-sided duo album The Story So Far/Oh Really? and his relentless dedication to the art of free playing. I know at least four people who have played live with him (mainly in London) - and they all spoke affectionately of their experiences with Lol as an artist.

It's a rank cliche, I know, but he really was part of a dying breed. A man who could appear on a rock album, play freeform soprano squalls like the world was ending and also once toured Britain in a skip (see above). Talk about yer 'genre-hopping mavericks'.