What started a few months back with an afternoon's jaunt to the house/museum of Sigmund Freud at 19 Berg Gasse in Vienna appears to be now burgeoning into something approaching one of Carl Jung's famous 'non-coincidences': everything last week came with a Freudian connection in one way or the other. Firstly, and most importantly, I saw the new David Cronenberg movie, A Dangerous Method. based on the play by Christopher Hampton (which, in turn was based on John Kerr's book, A Very Dangerous Method).

Months before it had already garnered mixed reviews since the film's premiere at the Venice Film Festival in September despite this concise, witty and unprepossessing film marking another high point in Cronenberg's journey from the king of body horror to elegant elder statesman of the darker side of human nature.

I think most of the mixed reviews probably come from those who yearn for a return to the excesses of Videodrome or Shivers. And to be sure, Dangerous... consists mainly of dialogue and interior shots, all tastefully captured in muted whites and with a distinct lack of suppurating wounds or penis substitutes. But the move towards more elegant and mature work which began all those years ago with the gynaecological shocker, Dead Ringers is now completed. Unlike, say, John Carpenter, Cronenberg has matured, eschewing his fabulous, but essentially genre-hamstrung juvenilia.

In A Dangerous Method he returns to his first love - the internal landscape of the psyche. And while critics may bemoan the lack of cheap thrills we still get the occasional spanking, references to female masturbation and even drug abuse (from free love advocating, proto-hippie Otto Gross, played by the estimable Vincent Cassel ). Yet in A Dangerous Method - as in his earlier underrated masterpiece of concision, Spider - the source material guides the structure. It's all about the performances, with man of the moment, Michael Fassbender, giving a beautifully uptight yet intense performance as Carl Jung; a man equally in thrall and appalled at the godlike status of his mentor, friend and father figure, Freud.

Viggo Mortensen, now a Cronenberg regular, gives exactly the top notch performance you'd expect: conveying wry world weariness with cigar-chomping gravitas. Only Keira Knightley strikes a slightly sour note; with her performance maybe drawing a little too much attention to the effort she has poured into her portrayal of mysterious patient, pupil and sexual misfit, Sabina Spielrein. In fact she's undercut by a stunning turn by Sarah Gadon as Jung's long-suffering, devoted wife.

The strange 'non-coincidence' here, for me was that only the weekend before I'd been in Copenhagen, looking at a major retrospective of painter Vilhelm Hammershøi. Hammershøi's major work stems from the same period of Freud and Jung's breakthroughs, and his dreamlike interiors, often empty, but sometimes populated by the singular figure of his wife glimpsed from behind, seemed to literally mirror the viewpoint of the film, where Jung's explorations of Spielrein's 'hysteria' are conducted in the classic psychoanalysts position, from behind his patient. One wonders how much of Hammershøi's work also alludes to the same turn of the century anxiety that Hampton's screenplay focuses on: the political and philosophical tensions undercut by a society that's now at leisure to investigate what's under each of our psychological bonnets. 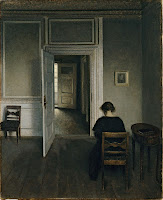 In the end, A Dangerous Method works equally well on all levels as a study of the dangers of lust in the workplace and the home, a fascinating investigation of the relationship between the two giants of 20th century psychoanalysis as well as an allegory for the sturm und drang a about to tear central Europe to shreds, this is a lovely little film that deserves better than a bunch of 80s film students moaning about a lack of gore. Go and see it.

If this wasn't enough couch-based soul-bearing, I've been also reading the new William Boyd novel, Waiting For Sunrise. Set in turn of the century Vienna (you're ahead of me, aren't you?) it concerns itself with a young man's adventures at the hands of the 'talking cure' set against a backdrop of Europe about to tear its... well, you get the picture. It's a meandering, slightly dissatisfying read - but it just goes to show that this stuff is mighty hip right now...

And in the next non-coincidence, the following day saw a visit to the National Portait Gallery's retrospective of the portraiture of grandson to the old man: Lucian. This is a collection that's comprehensive, well laid out and avoids too much of the biographical context. Freud hated labelling or naming, preferring to let the setting and the use of faces that had an inner life to provide a narrative. 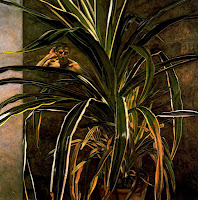 Ignoring the background of lovers, tangled lives and excess, it's nonetheless a topsy-turvy history of a painter whose early work is possibly more challenging than his later, more famous stuff. To be fair, his final works do demonstrate the ceaseless search for new expression; using a gross impasto to make the canvas surface bubble and boil. Yet one comes away feeling a certain sense of loss for those early years of more brutal existentialism. Abandoning the precise, obsessive linear dissections and exaggerations of work such as the portraits of first wife, Kitty, you're left with the impression that, once he'd gone through the impressively seismic shift into painterly abandon in the early '60s - perfecting his paradoxically anti-realist fetish for overgrown extremities and butcher's window flesh depicted in voluminous oil - his work took on an almost chocolate box glibness. For this reason, my favourite work in the exhibition is his Interior with Plant, Reflection Listening (Self-Portrait) (1968 pictured above) where the linear abstraction in the gigantic aloe vera plant competes (and wins) with the background image of Freud himself, balancing both aspects of his development.

Maybe it's the opulent life (the same one which allowed him to make so free with his parentage - 14 known kids and counting...) that undercuts his credibility here. Pictures of him hugging Kate Moss in bed certainly don't help. For once in my life I find myself in agreement with Brian Sewell. Who'd have thought it?
Posted by Chris Jones at Thursday, February 09, 2012