A few weeks back I went to see the Uk's premier legacy space rock act, Hawkwind.

Stop laughing at the back, there...

Now I fully understood, with only one original member on board the notional spaceship, that this wasn't going to be the best of musical evenings. I've seen the 'Wind many, many times (as Betty Marsden would say) and at various points in their journey through the cosmos. These gigs have been, at times, transcendent. I was a fanboy - worshipping at the altar of their early United Artist years as they melded Krautrock-ish motorik grooves with Michael Moorcock sword and sorcery; I went to Robert Calvert solo shows in Soho; I even saw them with Ginger Baker on drums more than once, and I doubt even Ginger remembers THOSE gigs. Now, with only lead singer/writer Dave Brock at the helm, the object of the night was more ageing curiosity than the expectation of being transported by the spirit of the age of afghan coats and Liquid Len's legendary lightshow. But what I got was far more depressing for several reasons.

Firstly, the band (and let's not forget that part of their charm was the beautifully cavalier approach to 'musical chops' in an age of flashy technique: ie: they were plodding three chord rockers with synthesizers) were pretty inept. Leaving aside the fact that Tim Blake - a man whose issues with substance abuse would have possibly rendered him more incapable than many - was the musical star of the evening, the rest of the band seemed desultory at best. Frankly I wasn't too taken aback by this, but Brock's disdain for the crowd (and the sartorial choice of wearing a pair of UGGS) coupled with a truly appalling sound system rendered the whole experience a bit like watching a screensaver with a migraine.

Brock relegated most singing duties to a large dude in a German WW2-style biker helmet and those awful goth biker boots that you only see worn in Camden on a Saturday afternoon. I think he was hoping that the two dancers and naff computerised graphics of fractals and cannabis leaves would distract us from the paucity of the deal we were getting. Certainly, the vast array of inappropriate pony tails and beards in the audience seemed fooled. But this, in itself, was surprising considering the average age of the punters. Was no one aware of the disrespect being flung at them? 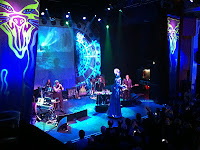 Look at the photo above. Yes, the silver, stilted dancer is impressive, in an arts collective, circussy kinda way. But pay closer attention to the banners at the side of the stage. See that image of an art deco panther? Here's a detail:

This is artwork taken from the band's legendary Space Ritual album. The album sleeve - a fabulous folding puzzle of a thing in its original vinyl edition (and actually well- reproduced in its CD incarnation) was one of the finest examples of the work of none other than Barney Bubbles. 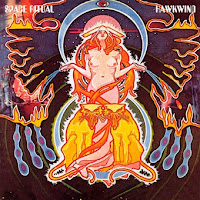 Those who know me will be aware that I am currently writing a book whose background is centred on the early '70s counter-cultural landscape of West London's Ladbroke Grove. No such book could pass without at least a veiled reference to Bubbles. A deeply troubled man who eventually took his own life - until recently Barney (or to give him his real name, Colin Fulcher) was a forgotten figure of 70s music: a designer/artist whose work challenged modern notions of typography, packaging, logo design and even promotional material. He was an idealist, inveterate stoner and was at various stages ripped off, ignored and ill-treated by the artists he served as well as the record companies he worked for. A recent book (Reasons To Be Cheerful by Paul Gorman) sought to change that, with an introduction from Peter Saville outlining the debt modern designers owe to him and a comprehensive cataloguing of classics rendered for clients as diverse as Strongbow Cider (the logo), Stiff records and the NME.

Simply put, he was the in-house designer for early Hawkwind. In the same way that Roger Dean almost single-handedly created the look and feel of Yes' prog zenith years, Bubbles provided fascinating sleeves and posters for the band that featured his trademark early '70s amalgamation of art nouveau, deco, 50s pulp comics and mind-expanding mandalas. Albums came with origami-like housings, complete with booklets, garish inner sleeves and more than made up for any musicological shorfalls contained on the grooves therein. My favourite of his was always Doremi Fasol Latido (which also happens to be Hawkwind's finest album) - its silver and black sleeve with the radiator grill logo never lost its allure. 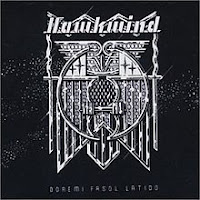 So, at the Shepherd's Bush Empire in December I was suddenly gripped by a notion more saddening than even Captain Brock's sorry attitude to his 'fans'. It was the realisation that, 40 years after the fact, Bubbles' work is stil being used to prop up an establishment (and yes, I'm aware of the irony of such a word, applied to such a 'people's' band, known for free gigs and communty fund-raisers when they had people such as Lemmy in their ranks) and (I'm guessing) NO ONE is being paid. It's one more insult to the memory of a man who really did change our ideas about how challenging popular culture can be, if you go that little bit further. Possibly far more than some of the acts he added a touch of class to.

As if that wasn't enough, this week Radio 4 played this. A documentary about the 'life' of Bubbles. At best perfunctory (how can be anything else in a mere 30 minutes?) - I was disappointed to find that no reference was made to Paul Gorman or his book. As it turns out, he was allegedly told he was unwanted. So, while we did get a little insight from old mucker Nik Turner (a man who seems to be constantly at war over Hawkwind's legacy with Brock) and some very touching words from his sister, we got little or no plaudits or critical insight into his work from actual designers or artists, and were left knowing only that he did some groovy stuff, took too many drugs and eventually found life too awful to bear. Frankly, half an hour on Google will get you more detail. It was a massive wasted opportunity. And while I still urge anyone to listen (while you still can), it's pretty thin gruel. I urge you to buy the book, LOOK at the amazing stuff he created, and avoid anyone who, at the age of 70 is still trying to charge you 20 quid for the mistaken belief that they're trying to uphold any anti-establishment values or change the world.
Posted by Chris Jones at Wednesday, January 04, 2012