Smile, when your heart is breaking...

Inspired by a late night conversation with the EBP, I decided to do a one day census of what’s now gone beyond ‘ubiquitous’ into ‘insanely overproduced’ territory – the Xmas comedy DVD. Over the last month your eyeballs couldn’t swivel, whilst pacing the corridors of the London Underground, without being assailed by gurning stand-ups hawking their wares in time for that most special of days: a grim evening in mid-January when you finally get round to taking off the shrink-wrap and hearing those same jokes that you’ve mildly chuckled to over the course of the last year; all delivered in a live context, to howls of approval.

And what quantities of mirth-juice have been digitised this year! In a single afternoon of snapping and googling I found no less than 23 ‘major’ names in stand-up had produced DVDS; and all of them released in a single fortnight at the beginning of November. Undoubtedly someone more learned than I will point out that in times of recession we NEED to laugh more. As a fan of the BBC’s digital radio channel 4Extra, I’m well-versed in the type of radio fare that kept our post-war lives slightly less tainted by food shortages and Luftwaffe-sponsored bombsites. The British are masters at the self-deprecating, ‘you’ve gotta laugh unless you cry’-type of humour in times of stress. But at least in those far-off days we didn’t have to LOOK at these faces urging us to cheer the fuck up.

OK, I’m being a tad cynical here, and as an avowed fan of some of these names I have to admit to enjoying their regular appearances on, well, just about any quiz show or stand-up variety package broadcast after 9pm on terrestrial TV. I’m just shocked by the overwhelming quantity as well as the notion that anyone would really want to watch such a thing more than once… or twice if you really are a student of the art of timing/delivery/being hilariously offensive. EBP mentioned that he was more fascinated to uncover the hidden meanings in the various stances/expressions/states of rictus displayed on these throwaway artefacts. So… let’s look at the categories, shall we?

Zany, wacky, bonkers, madcap… how many irritating ways can you choose to take up oxygen? Like Dave Lee Travis writ large, these loonies want you to know that when you push the disc into the maw of your player you’ll be transported into a magical world of ‘surreal’ comedy. This mis-use of the word has always stymied me. Let’s go back to Andre Breton’s peerless definition: ‘n. Pure psychic automatism, by which one proposes to express, either verbally, in writing, or by any other manner, the real functioning of thought. Dictation of thought in the absence of all control exercised by reason, outside of all aesthetic and moral preoccupation.’ In this context, a description of Milton Jones as ‘King of The Surreal one-liners’ seems a little wayward doesn’t it? 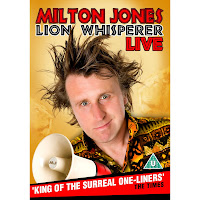 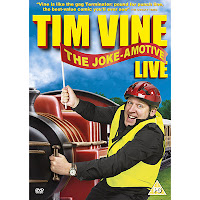 Both Jones and Tim Vine operate in the same area of wordplay that I find amusing. But backing it up with a silly shirt/hairstyle/costume seems over the top. This is probably why I prefer Milton on the radio (The Very World Of Milton Jones). Also, to be fair, neither of these have appeared on a tube wall, to my knowledge. 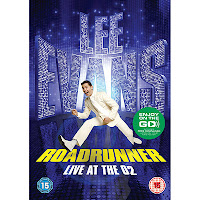 Lee Evans’ stance is actually a fair representation of his physical schtick. He does come at you like Norman Wisdom on speed, and becomes just as irritating as well. At the heart of Evans is a very serious man who works ridiculously hard to make himself seem ridiculous. No work for a grown man. 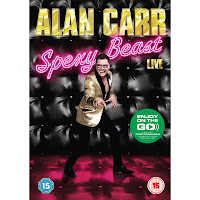 Alan Carr at least drips with irony. The fake twinkle, the nod to glasses NOT being sexy, the camp lustre of lurex and leather: very knowing, and probably not as bad as it seems. His Radio 2 show is often most diverting and I get the impression he’s pretty intelligent. It’s just a shame he had to soil his CV so heinously, and so early on by working with that prize c*** Justin Lee Collins. 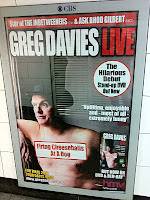 Finally we have Greg Davis, who seems to have achieved something actually surreal with his semi-naked avec topper stance. Not even looking at the viewer, Davies is a stalwart whose appearances in Who’s Line Is It Anyway? onwards always seemed too non-threatening to allow him to be that mainstream.

It pains me to include Sarah Millican in any of this. Her faux chat show on Radio 4 with Simon Day this year was priceless; her stand-up is simultaneously mumsy and outrageous, and she constantly reminds me how North Easterners (as opposed to Liverpudlians, but we’ll get round to THEM in a moment) are possibly the naturally funniest people on the planet. But here she is, a minxy sideways glance and those eyebrows which denote: ‘I’m a bit cheeky and am liable to make observational quips.’ Likewise the Patrick Monahan effort, where he looks like he just soiled himself and despite his years, still finds this funny. Jimmy Carr, as far as I can work out, only has two expressions: eyebrows up, or in a frown. Obviously he’s used up his other on previous tapes, so it’s the surprised mode we get this year. The pink background merely denotes ‘bored marketing designer trying desprately to catch your eye’. Actually I quite admire the meta-obvious title. Straight to the point, and no mistake. 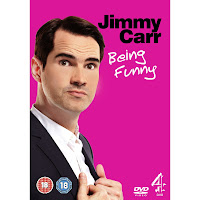 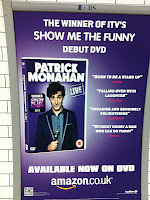 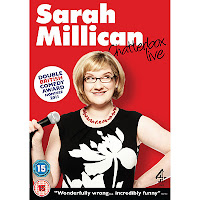 Micky Flanagan’s eyebrows are basically his USP, so if he didn’t lift the buggers he’d end up looking like a cross between Ron Jeremy and a hedge. Note also his provocative finger pointing. We better listen to his routine because it’ll make us think. Other cheeky pointers include Kevin Bridges and, likewise, Stephen Merchant (whose stand-up is actually pretty good, despite his work with you-know-who) – although Merchant breaks the mould by having a REPRESENTATION of himself in vaguely geeky hyperreal fashion. It’s undeniably intriguing, although the title detracts. Russell Kane also seems to have done something vaguely ‘naughty’, possibly in a childish attempt to gain attention. Let’s ignore him… 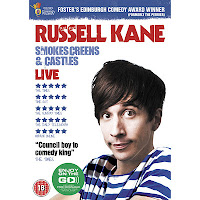 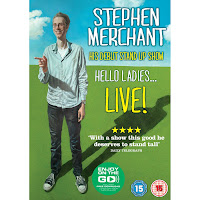 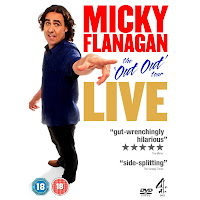 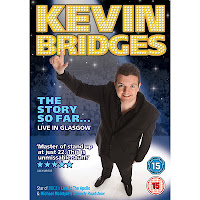 John Cleese’s painfully venal release tries, vainly, to straddle the eyebrow-lifting and madcap expression divide. Strengthened by what looks like the bastard offspring of Mr Bean’s ‘teddy’ on his shoulder, the result is demeaning in the extreme. This man once starred in the Life Of Brian. Oh dear. 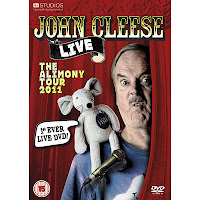 Cleese’s DVD also straddles a sub-genre which is made up of one other release: Peter Kay’s: appearing from behind a curtain. ‘His first new DVD in 8 years!’ proclaims the poster. Well, he could have waited a little longer, surely? His boyish (by now photoshopped, I’d imagine) grin makes me want to maim. Enough of him and his frankly pants observational style. 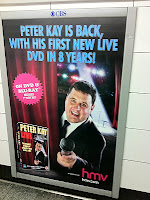 Comedy is a SERIOUS BUSINESS

The ‘wry’ smile’ or the lack of any smile at all either denotes a new-found wish to be regarded seriously, or that the comedy may be slightly political or awkwardly personal/self-confessional. First up is Russell Howard. His appearances always mar Mock The Week. His BBC Three series seemed aimed at students with the IQ of ten-year olds. No, I’m, not a bloody fan. And I’m not going to be won over by his grungy shirt and product-drenched hair. Fuck him. Mark Watson won't look at you. he's SENSITIVE. Next we come to Jason Manford, the first of my least favourite scousers. Following a woeful attempt to woo prime time pensioners on BBC’s One Show (and blowing it spectacularly by some indiscrete texting) he now reappears looking world weary and… like he’s stolen the shirt of Syd Barrett. Good grief. 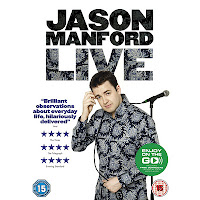 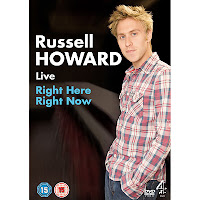 Dylan Moran is just funny, so shut up, we won’t dissect him too much. And Reginald D Hunter seems to have gone SO far into the desecration of his own visage (with SERIOUS words) that you are in no doubt that his rather good comedy will be laced with HOME TRUTHS. Andy Parsons is, by nature political and relies on his cynicism to pack the punch needed in his stand up. He deserves extra kudos for lying down. Which brings me to John Bishop. God, I hate John Bishop. His slurred delivery, hopeless timing and down-to-earth Liverpool take on life all make me feel like I’ve taken some kind of tranquiliser that slows the world down to a crawl. Will he ever get to the punch line? And when he does, was that really IT? He’s wearing a suit: that suit denotes ‘I’ve arrived and I’ve sold out a kerzillion seater stadiums’. If one of these DVDs denotes the parlous state of our nation it’s this. Dreary, anti-intellectual and barely articulate. And he’s here all week… 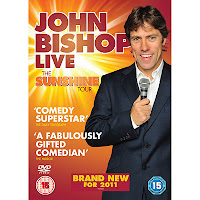 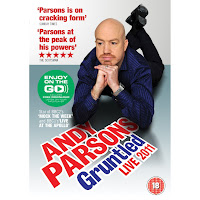 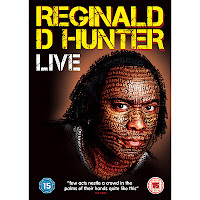 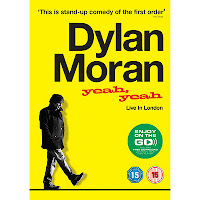 (Note: NOT included here were Billy Connolly's 'Greatest Hits' package which furthered his desire to be thought of as some safe old rocker by having him leaning on a JUKEBOX (see what he did there?), and the latest one from Angelos Epithemiou & Friends - which features a character actor and a cast larger than one. And it's probably quite funny, too).
Posted by Chris Jones at Wednesday, December 07, 2011