Look Up - It's a Huge Metaphor!

So I went to see Melancholia, the latest Lars Von Trier epic. And this one IS epic. It's about ending it all as a big blue planet careers towards the Earth. As a caveat to this post: I have not really been up to speed on the controversial Mr Von T in recent years. Aware of the shock, awe and reportedly wilful baiting of audiences and critics alike, I was not prepared for this - I was expecting 'pretentious', 'perverse', 'sexist, and maybe even 'gratuitous'. Of course in modern parlance these are merely code words for 'challenging', 'thought-provoking' or even 'deep'. One suspects that if it was by Bergman (and it does belong in that fine tradition of Scandinavians getting all existential on our asses) it would have been praised to the rafters. 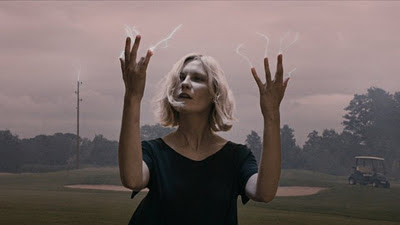 At just over two hours it's no Magnolia, and criticism of its pace dragging merely serves to highlight contemporary audience's goldfish attention span. Other reviews that judge it on its Sci Fi chops miss the point as well. The best Sci Fi is always metaphorical, holds a mirror up to our world. And like most previous arthouse attempts at the genre - this relies on few special effects and is all the better for it (Tarkovsky's Sacrifice springs to mind). But that's not to say that Lars don't manage some incredible montages and uses of hi tech toys. In fact the first ten minutes are amazing; HD fantasy accompanied by Wagner's overture to Tristan und Isolde. That this lushness gives way to a much more dogme-like handheld approach only makes the whole more poignant. Only the last few minutes disappoint slightly - the silhouette of the three main protagonists holding hands in their 'cave' made of sticks as Melancholia consumes them all is straight from the Speilberg book of apocalyptic sentimentality. But this really is the anti-Emmerich last days film.

Reviews have been somewhat galling in their inability to get over their obvious dislike of Von Trier the man. And they also show a worrying inability to handle either real representations of mental issues or what are fairly straightforward metaphors. David Sexton in The ES, talking of the film's opening claims: ’This overture is a collage of haunting, inexplicable images.’ Inexplicable? In what way unless you didn’t stay until the end of the movie? In this stunning prologue the use of a high speed camera captures each key moment in the film to follow, often rendering ‘real’ events as allegory but still accurately mirroring the plot (Kirsten Dunst tells of being feeling dragged back by tendrils of wool, her horse sits beneath her when beaten, Charlotte Gainsbourg’s character does indeed suffer traumatic events on a putting green etc etc). 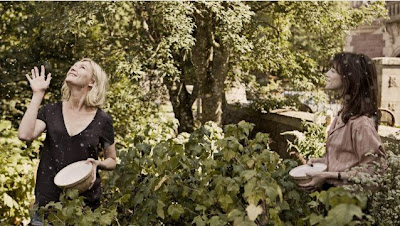 The sisters (Dunst as the depressive Justine and Charlotte Gainsbourg as the continually tense Claire whose wealthy husband, Keifer Sutherland, bankrolls the lavish and disastrous wedding of the movie's first half) are the two planets. Locked on a collision course, the power balance moves subtly between the two. Gainsbourg is the fretful soul of modern society, Dunst, like the big blue nemesis, sucks the atmosphere from others in her self-interested misery, and revives as disaster becomes inevitable. Cleverly and ironically it's Sutherland who commits suicide in the face of his rational world falling apart.

Von Trier has made a brilliant film about depression. A MODERN film about depression but one that rejects the cold intellectualisation of the rich surroundings in which it is set. I think the key moment in the whole film is one that could almost be overlooked. During the wedding Dunst enters a library and suddenly takes all the books of modern art on display and replaces them with older images – Brueghels filled with allegory and human nature, as opposed to Maleviches – cold abstracts pushing the cold nihilism of formalism. This is an almost perfect representation of the tendency of depression to seek warmth in inappropriate places. 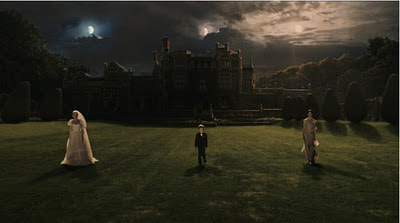 The moment where the two sisters cross the Last Year At Marienbad-style lawn under the equal glare of both moon and baleful blue planet marks the turning point, where the spectre of melancholia outshines the rationality of moonshine. Justine bathes naked the reflected glow of Melancholia - possibly the only reference to eroticism throughout the whole film. Sex is either unwanted intimacy or a self-berating form of release. But to sufferers of depression the tropes are stark and ultimately TRUTHFUL. The selfishness, the lack of empathy, the childish reliance on cheap sentimentality (Justine's love of her eccentric father played by John Hurt, while she obviously takes after her coldly dismissive mother, played brutally by Charlotte Rampling, a previous generation's very own Charlotte Gainsbourg), the relish in the idea of oblivion: not just for the individual but the whole sorry mess that we call civilisation. And let's not forget the BATHS. Mother and daughter both choose to retreat to the womb at the most inconvenient part of a wedding reception.

This is not a masterpiece, but it's serious, not to be dismissed lightly and to anyone who's ever owned a black dog, unmissable...
Posted by Chris Jones at Wednesday, October 05, 2011