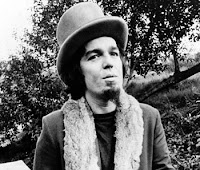 I'd been considering how and when to return to the writing game for a while now, but didn't really want to be nudged into it by this. Captain Beefheart is dead at the age of 69 - someone who genuinely changed my life. I loved the Captain's work but I'd be lying if I said that I'd not given up on ever hearing new music from the man. He'd long since retreated into semi-retirement, and was well-known to be seriously ill. His work was so singular that it demanded a singular kind of attention too: despite his protestations, he obviously channelled the blues. But also far more than channelled: he mutated it; stretched it; warped it; moulded it like sculpture's clay until it fitted around his own personal vision like a pair of crow's wings wrapped around a fabulous luminescent deep sea creature. The touchstone/key text of 1969's Trout Mask Replica takes the legacy of the Delta and pulls and twists it to breaking point. Notoriously awkward, it resists all but the most dedicated of attention spans until it finally reveals itself to be stunningly complex, remarkably hummable (really!) in places, seriously funny (no one else ever got a laugh out of the words 'fast and bUUUlbous') and, ultimately, startlingly ORIGINAL. A pure distillation of West Coast liberalism, art school smarts and a passing love of free jazz.

Like many of his peers, Don understood the value of mythology in the role of the (then) modern rock icon. Spotting (as did say, Bowie or indeed Zappa) that pop stars were our contemporary myths and deities in the making, his life was a glorious patchwork of half-truths, whispered rumour and blindingly obvious talent. Don (Van) Vliet (even the 'Van' was disputed) was a childhood artistic prodigy who appeared on TV and barely attended school? Maybe. An eight octave vocal range that could perform magical tasks? Probably not (Rock's Back Pages contains a vintage interview by Miles with Don at the time of the original Zappa-led sessions for Shiny Beast (Bat Chain Puller) where he claims to be able to shatter a glass with his voice alone. He fails - blaming tiredness). Forcing the Magic Band to learn and rehearse Trout Mask Replica for six months in a run down house on minimum wages and existing on a diet of soya beans while Don spent huge amounts on getting the trees in the garden looked after by a tree surgeon due to the negative effects of the music? Definitely true in parts, if you believe Bill Harkelroad (whose book about his tenure as Zoot Horn Rollo is well worth hunting down). Hypochondriac, megalomaniac, radical ecologist, craven opportunist, poet, abstract expressionist, rampant self promoter and oddly-old-soul-within-a-young-body: he was all of the above and much more.

The chances of ever hearing the thing that drew us to him in the first place were zero - so his passing is made easier, albeit obviously too soon (when isn't it?) and robbing us of any more of his fabulously oblique if often concisely accurate insights. I first heard Don played on an edition of 'My Top Ten' (a Radio One programme featuring an artist of note's favourite tracks), wherein Jethro Tull's Ian Anderson chose 'Yellow Brick Road' from Safe As Milk. From the opening announcement (''The following tone is a recording tone…'') it was obvious that this was equally repellant in its oddness and alluring in its equally odd tunefulness. So THIS was the infamous Captain Beefheart? It was several years - via brief brushes such as Trout Mask Replica overheard at a teenage party (how many parties these days would have THAT playing?), or Don glimpsed in his commercial nadir on the Old Grey Whistle Test - before I finally bought TMR. And again it was a few years before I finally both understood what that album was about, and that not all of Don's work was as tricky. From that point I was hooked, and I had to have it all…

Textually? The Captain's work, like all great artists, was variegated and diverse, falling into distinct camps. The Howlin' Wolf grit of the early years (with Ry Cooder on Safe As Milk) which still contained the wild strains of psychedelia (cf: Electricity - ''lighthouse beacons straight ahead, straight ahead'') And what about Strictly Personal? A transitional work of phased blues genius that Don allegedly disowned due to Bob Krasnow's far-out mixing job? Another eminently disputable 'fact'. And then the quantum leap to Trout Mask Replica, funded by school friend Zappa and (again) supposedly dashed off in a day after all the graft of transcribing the wild imaginings of the Captain from his hastily scribbled piano doodles (he couldn't play the piano). And from this point (for me) the band (and by this time it was definitely a band) went through an extraordinary arc that began with the arguably MORE challenging tangle of Lick My Decals Off, Baby towards the swampy grunt of The Spotlight Kid (with its remarkable cover shot of Don resplendent in a genuine Nudie's suit) and thence the shiny west coast zenith of Clear Spot (I can't help it, I know it's an easy one in the canon, but the band are ridiculously tight by this point and the whole album rocks like no other - it's the ultimate meeting point of avant garde and commercial for me).

From here the push towards monetary rewards became to much for an obviously conflicted Don. The move to Virgin; discarding of the original band, the double dismay caused by Unconditionally Guaranteed (which even went as far as to even feature the Captain grasping the greenbacks on the sleeve shot) and Bluejeans and Moonbeams: the truth is that Clear Spot was just as calculatingly mainstream - but wins over these two albums because of the ensemble playing, the classic Ted Templeman production and the fact that the Virgin albums are just somewhat cloyingly crass. By the mid 70s Don found himself mired in legal problems and relying on Zappa again (which fortuitously resulted in the fabulous semi-live Bongo Fury, wherein Don intones, grunts and parps his was over the last great incarnation of the Mothers). And although it resulted in a rift that would never be healed between the two pals it also resulted in the happy ending-of-sorts of Don's last albums, from a re-recorded Shiny Beast (Bat Chain Puller) to Ice Cream For Crow and Doc At The Radar Station. These are albums that find Don far more at ease with his muse, now aware that a whole new generation regarded his dust bowl surrealism as sacred text and also matching his lateral mindset with another first class band. These are not my favourites, but they are undeniably good, sacrificing visceral thrills for more abstract approach. From here it was one step to a caravan in the Mojave, married life and quiet contemplation of his first love - visual art, while failing health stalked him.

His influence was possibly more conceptual than musical - he at least gave us the term 'Beefheartian' though many artists owe him a huge debt (Tom Waits for a start) - but on a (strictly) personal level, he was a guru in the true sense of the word: flawed, human, mercurial, wise and foolish in equal measure. So, Mr Zoot Horn Rollo, hit that long lunar note, and let it float...

Welcome back -- excellent post. I was always more of a Zappa fan but have come to really enjoy Beefheart too over the last few years. As with the music of John Zorn, it finally "clicked" for me and made sense.