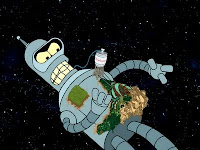 Garuda is currently back here, doing a little contract work. In fact what I'm doing is incredibly interesting. More to follow, as I'm attempting to engage with an online community in a way that all my time here never even got close to. And that includes the country music message board at Radio 2 ;-)
Basically the h2g2 site is a piece of wonderful anachronism from back in the day, founded by the marvellous Douglas Adams. Its denizens are rabid, passionate people who have held their ground, because a publicly funded corporation gave them the freedom to express themselves as harmlessly as possible. The result is like Wikipedia's rather odd uncle. I've yet to really find out how these people have the time or the motivation to keep what is essentially a volunteer run site going, but they do. And while it may LOOK like a weird peice of technological archaeology, it's really an example of a totally separate way of useing the web to talk and share. Tweeters, Facebookers and suchlike will scoff. Let 'em. This site has legs and following a planned relaunch could be destined for something amazing.
It's like a science experiment that got left in a jar and forgotten, the scientists returning a few years later to find that it's teeming with strange new lifeforms. More to follow...
Posted by Chris Jones at Friday, September 11, 2009

louis vuitton said...
This comment has been removed by a blog administrator.
7:34 am