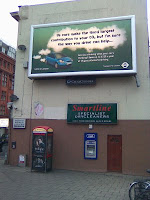 Believe it or not folks, I used to BE in a band called Urban Blight. We were going to be called Victorian Depression until I pointed out to the guitarist that it could be shortened to VD), but I'm not going to bore you with tales of teenage punk bands who rocked Coventry in 1977. Instead I want to rant about the state of a part London's cityscape.

I work just round the corner from Old Street, in the heart of bustling Hoxton/Shoreditch. How trendy! you cry. Well, no. Admittedly if you take a stroll DOWN Old Street towards Columbia Road or Brick Lane you'll be delighted by the tourist-friendly rebirth of the East End (with or without the excuse for 'art' by Banksy). But round Old Street station itself? Oh dear.

The picture at the top of this post is the first thing I see as I emerge from the brutalist bunker/labyrinth that constitutes the Underground hub. Imagine this sight compounded by the smell of rotting garbage (and some idiot trying to stuff a Metro in your face) and you get the general idea of what I'm trying to convey. Urban blight indeed. And that door on the right hand side of the wall? This must surely be one of the famed entrances to hell ;-) 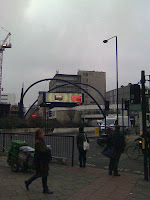 A brief glimpse behind you reveals the roundabout itself. Tantalisingly beckoning you towards the utopia of The Barbican (I'm actually a FAN of brutalism when it's done right) or the intriguing maze of the reborn old city, or even the bourgeois sand pit of Islington, it remains an eyesore by any standards, with its glowering steel gyroscope/advertising hording/erm...thing.

And proceeding to work: as if this gorgeous wall of shame isn't enough when you walk around the corner it's a plethora of chicken shops, shodddy overpriced sandwich emporiums and the like. Let me tell you, if you've just endured the armpit embracing fun of a few tube rides this is NOT inspiring stuff. It's a dump, and it's actually, literally and demonstrably DEPRESSING for God's sake. At what point do planners/architects/councils/local authorities/THE MAN ...whoever it is, begin to realise the effect that this kind of landscape has on the psyche.

Without wishing to sound like Prince Charles on skunk (great band name!) we humans need some beauty to feed the soul, make us feel that everything's not really as bad as it obviously is and that the city we live in cares for us. I may make this a regular rant now, because as I type I start to think of more and more examples of this kind of appalling ugliness that shows London not to be a shining metropolis but a seething cesspit of badly thought out road planning, ridiculous public transport infrastructure and absolutely USELESS architecture/town planning. For this reason alone 2012 will be a total fiasco. 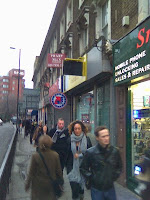 Any regular readers out there are encouraged to send in other examples of this kind of soul-sucking detritus that we mindlessly tolerate on a daily basis here in our wonderful capital. Yes, I KNOW London's really cool, and I love it dearly, but like a lover who's really let themselves go, it pains me to see such abject lack of care. Rant over...
Posted by Chris Jones at Thursday, January 15, 2009

but at least before you enter hell you can get some cash out. it will charge you £1.90 for the privilege though by the look of it.

i'd nominate the seven sisters road as one of the most depressing and seemingly interminable thoroughfares on the entire planet.

but at least it doesn't have any fucking banksys...

Thanks for your suggestion Mr Bass. I must admit, last time I was up your way it struck me with its olde worlde charm. IE: with the plague, rickets, no sewers and gin-soaked trollopes lining the gutters.
Another one for me has to be Brixton Hight St. Especially Iceland. Ooh, I love Iceland. etc
I think I will make this a regular spot, which reminds me...I must bring myself bang up to date with Tony Blackburn. I miss him so...