In the Court of Times Square 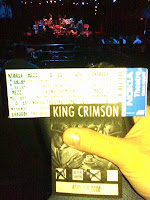 It's been a couple of weeks, so apologies for anyone gasping to know how my latest tustle with the mighty Crimbeast, incarnation no.316(a)) went. Frankly flying out to New York on a Thursday (to see a show the same evening, resulting in a straight 24 hour day) was perhaps a little over-ambitious, but at the point that I booked I only had a confirmed place on the Thursday night. The rest of the shows (four in all) were sold out.

Naturally, meeting up with friend, employee and general good-guy, Sidney Smiff made the whole thing an even deeper pleasure. There was your humble hack, ready to just enjoy one show and a night or three in a scuzzy hotel, and what happens? I get to go backstage, watch a sound check/rehearsal, meet at least three fifths of the band and indulge in some major prog chinwaggery. And get offered guestlist for the following nights. Urgh, how dull....
To the shows:

Thursday. Despite what was described by Adrian Belew as 'the worst soundcheck we've ever done', the band were, at least as far as my lagged brain could tell, firing on about 4 and a half of their six cylinders. The immediate difference to the hardened KC watcher is the addition of Gavin Harrison (drums) to the fold. Beefing up the beats has twisted the dynamic in some weird and wonderful ways. This being the last run of the present tour, the boys (BOYS??!!??) had ironed out a lot of the creases. However a few remained. Tony Levin's stick bass ruminations had a little trouble fitting into material that was hand-tooled for Trey Gunn's more delicate fingers, and oddly both Belew and Fripp's six string contributions seemed a trifle tentative at times. It was a splendid mixture of 80s new wavisms (including a bludgeoningly wonderful Neurotica) rather neglected double trio treats (Vroom sounded mighty fine), and at least three 70s classics in The Talking Drum, Larks Tongues Pt2 and Red (yay!). Levin's stick STILL sounds incredible however...
Best of all was the last quartet's Level Five, which, with its new double drum middle section, absolutely crushed the front few rows of adoring fans.
The low point was the version of Indiscipline which Mastellotto and Harrison's beats made too four-square. I missed Bruford's jazzy mischief.

Friday - needed a night off. To 'cleanse the pallette', as Sidney said...

Saturday: well, maybe it was the Jack Daniels beforehand, maybe the vantage point from the VIP balcony, but my god...I was SO glad I hung on for more. This was one of those nights that almost instantaneously fade into legend even as you watch. From a raised position stage right I could now see Fripp (he's taken to now playing BEHIND his racks of signal processors and midi gear, meaning that unless you're twenty feet tall or sitting right over on stage left you won't see a thing). As each second passed I wanted to preserve the whole thing in...erm...aspic. Reports of RF now actually displaying genuine joy at playing this stuff were confirmed as your correspondent saw him openly laugh, point, grin and generally get off on his bandmate's antics. Belew fluffed a line: He chortled. Pat and Gavin blew down the house: He guffawed. Amazing. But it wasn't hard to see why. What, on the previous occasion was ridiculously proficient, now became something totally OTHER. It was KING CRIMSON. Lofty, intellectual, complex, sensuous, rowdy, boisterous, sexy (YES sexy) and altogether transcendental.
The setlist varied in spots. One Time, Sleepless (how long since THAT was aired?) all dashed off with aplomb. Level Five again shone. Even Indiscipline was a jollier affair. A final Marine Coda left the Nokia Theatre awash with Frippertronics from somewhere off the edges of Alpha Centauri.
I was speechless.
So, many, many thanks to the KC. A million more thanks to Sid Smith.
Billed as possibly the last outing for RF and KC, this 40th anniversary tour brought me home again. It was worth the jetlag.
Posted by Chris Jones at Monday, September 01, 2008